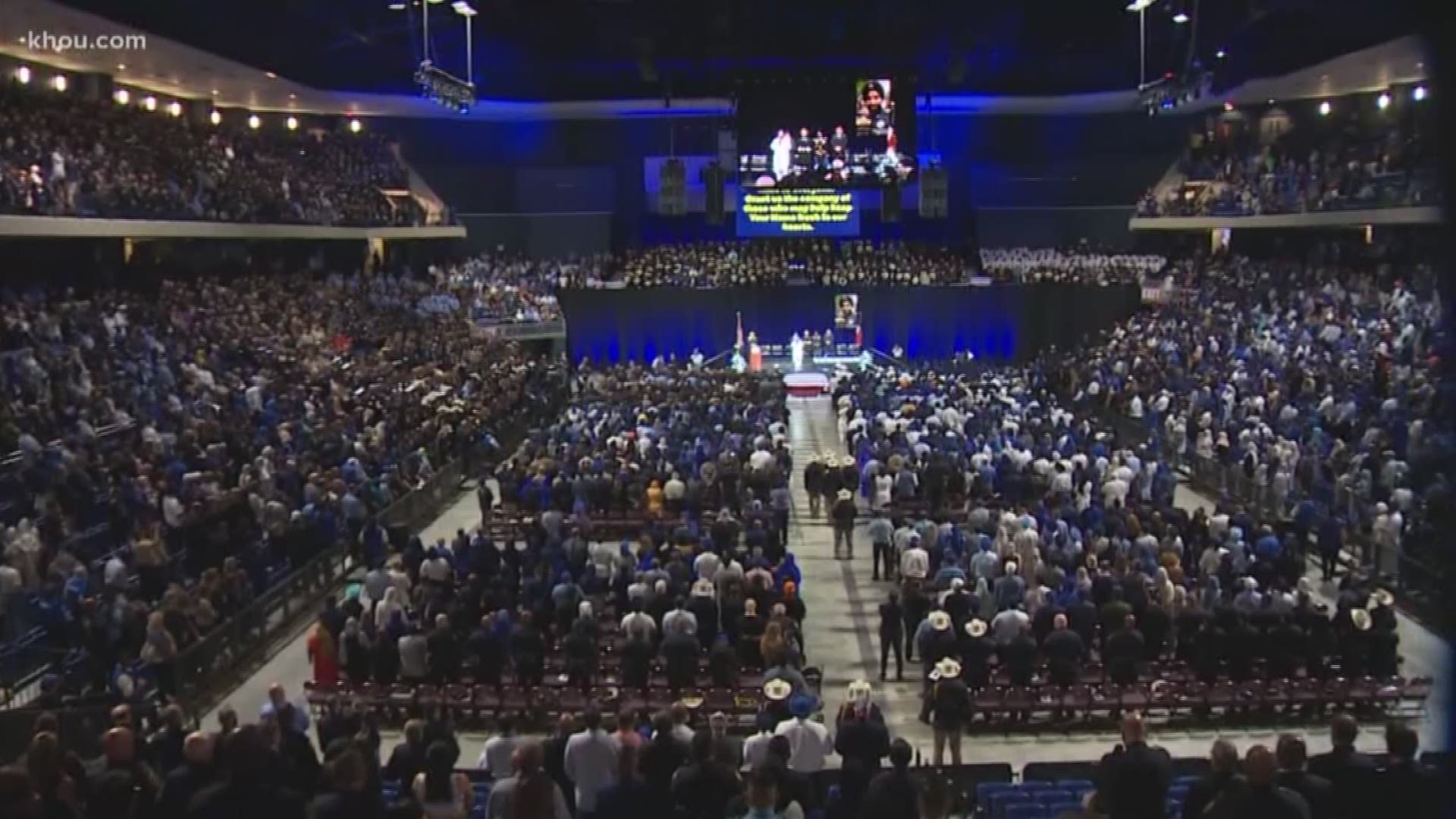 HOUSTON — Houston and members of the law enforcement community said goodbye to Harris County Sheriff's Deputy Sandeep Dhaliwal today with a procession, two funeral services and a 21-gun salute with a flyover.

At the request of the Sikh National Center, many dressed in navy blue, just like the Harris County Sheriff’s Office uniform Dhaliwal proudly wore.

During the funeral, all rose, saluted then listened to hours of tributes from politicians, friends and deputies he inspired.

“You don’t replace people like Sandeep,” Sheriff Ed Gonzalez said. “Instead, we must allow ourselves to be changed by him.”

“It’s that love that has brought us here today,” Captain Singh said. “His warm embrace, his contagious smile and his unwavering, unrelenting high spirits.”

Sergeant Adam Lightfoot told the crowd Dhaliwal never lost enthusiasm for the job. When once told to catch drivers doing the wrong thing on the road, he was amazed.

“Dhaliwal had six or seven cars pulled over at one time,” Sgt. Lightfoot said. “I said, 'What are you doing?' 'Well, sarge, I flagged them all over, and I was going to write them a ticket one at a time.' I said, 'Well, you really love this job.'”

“Babba, you raised a good man,” Harris County Commissioner and former Sheriff Adrian Garcia said. “You raised him with a heart of gold.”

“I don’t know why the world is dark or dangerous or why bad things happen to people like officer Dhaliwal,” said Amy Lasko, who lives in the community Deputy Dhaliwal patrolled. “But I do know that he would want us to come together and not give in to the darkness.”

After a flyover, family said one final prayer outside the Berry Center where the funeral was held. Then, they followed his casket to a funeral home where Dhaliwal’s body was cremated.

Meanwhile at the National Sikh Center, members of their faith concluded three days of non-stop scripture reading and prayer. All shared a meal. Everyone ate the same food, sat on the same level and showed the kind of unity Dhaliwal loved.

Officers from around country showed up. Demmery Thomas did, too. Dhaliwal patrolled Thomas’ community, too, so Thomas gave up his day to be a part of every service honoring the deputy.

“I want to follow him to the end,” Thomas said. “Stay with him. Let him know that he was loved. We all in the community loved that man.”

Donations for Deputy Dhaliwal’s family may be made in his name to the Harris County Sheriff’s Office Benevolence Association (www.hcsoba.com), or on this GoFundMe account.

ALSO READ: What you need to know about Sikh funerals

1:54 p.m. — Harris County Sheriff Ed Gonzalez said Dhaliwal "united our community in a powerful way. In a way that only Sandeep could do."

11:30 a.m. — An Honor Guard from the Harris County Sheriff's Office paid their final salute to Deputy Dhaliwal at a service at the Berry Center.

11:20 a.m. —  The prayer, Dr. Hardam Singh Azad, recounts the 10 gurus who founded the Sikh religion, the history of struggles and the lives lost for freedom of religion.

9:50 a.m. — "So beautiful. People are finding ways to incorporate navy into their outfit today. An easy and free way to #HonorDhaliwal." - Melissa Correa, KHOU 11

9:35 a.m. — All the way from Canada: "A number of Canadian officers, some also of the Sikh faith, made the journey here to Houston to bid Deputy Dhaliwal farewell" — Janel Forte, KHOU 11

9:10 a.m. — "To paraphrase when @SheriffEd_HCSO said about this friend: this is a man who served his community until he took his last breath." - Melissa Correa, KHOU 11.

8 a.m. — "LOOK! These folks made CUSTOM yard signs including the small billboard! Such a beautiful tribute for a deserving husband and father of three who gave his life after taking an oath to protect and serve us all." - Melissa Correa, KHOU 11

7:36 a.m. — "This is what the family of @HCSOTexas deputy Sandeep Dhaliwal will see as the funeral procession moves down Barker Cypress to the Berry Center." - Melissa Correa, KHOU 11

6:45 a.m. — The funeral procession is expected to start at about 7:30 a.m. Air 11 will be overhead for portions of the procession with live coverage.

6:13 a.m. — The Harris County Toll Road Authority is honoring the fallen deputy with these End of Watch signs along our tollways.

6 a.m. — Here is this morning's #HTownRush Rush Block - the latest Houston headlines, including info about today's services for Deputy Dhaliwal.

5:39 a.m. — As a reminder, here's a look at the funeral procession route for later this morning.