This Davis couple had a long road to marriage equality

Ellen Pontac and Shelly Bailes fought for decades to secure the right to do what so many other people had done before them— get married. 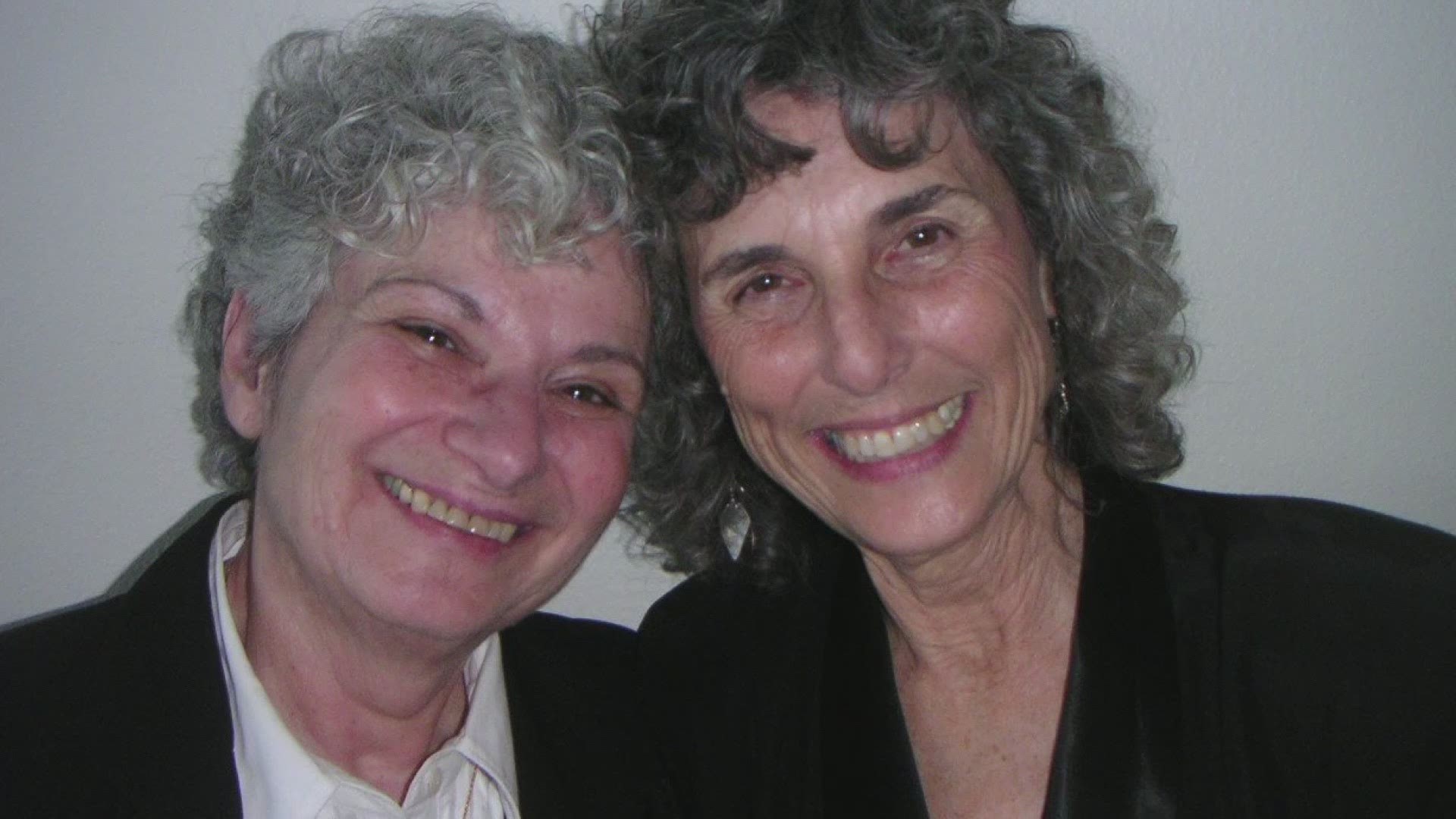 DAVIS, Calif. — Ellen Pontac, 77, and Shelly Bailes, 78, were the first same-sex couple married in Yolo County and one of the first in California.

While their story has a happy ending, the Davis couple fought against a disapproving culture and political climate for years.

Both women were living in New York when they met in 1973. Pontac believed she was simply going out with friends.

“It was a blind date,” Bailes said, correcting Pontac. “I had a friend that said, ‘There’s somebody I’d like you to meet, but don’t get serious with her. She’s a little bit wild.’ Well, that peaked my interest.”

The pair hit it off right away.

“I was really excited about meeting her, and I called her probably about a hundred times that month,” Bailes explained. “I got a $200 dollar phone bill which was, in those days, a lot of money. It was 1973.”

Their relationship continued to grow so they made the decision to live together. Even then though, life was difficult for same-sex couples.

“We moved in together in June of 1974,” Bailes said. “Both our lawyers at the time told us that if we told anybody about our relationship, we would lose our kids. They would take them right out of our home.”

Bailes recalled a very scary time in their relationship.

“One time Ellen’s ex-husband broke down our door, dragged her kids out by the hair in their pajamas and threw them in the car," Bailes said.

When the pair called the police, an officer showed up to their home and told them it was a domestic problem and to take care of it themselves.

"My kids were standing behind me crying. I said, ‘Well what about my kids?’ And he said, ‘Well you shouldn’t be living here,’” Bailes said.

Still, the two carried on with their lives, nurturing their relationship and caring for their families. They were together, but they were often forced to keep their love a secret.

“I didn’t realize what I was getting into, really,” Pontac said. “It never dawned on me I was going to spend the rest of my life this person and be madly in love with her and be totally happy."

Bailes remember the first time they held hands in public.

“We were in New York City in Manhattan and we actually had to go to the bathroom, so we ran into Carnegie Hall," Bailes said. "And as we ran across the street, I grabbed Ellen’s hand and it was actually the first time we had touched outdoors. It was incredible. I still remember it, and it was in 1974.”

Bailes and Pontac slowly began to transition into the next phase of their lives. They would become staunch activists pushing for rights for same-sex couples.

“The first thing we did was we changed a law in Davis to end discrimination against same sex people,” Bailes said.

“It was like a job that you loved,” Pontac recalled of their political activism. “You know, you were doing something that could really make a difference. And that doesn’t happen too often in one’s life, I don’t think, unless you make it happen. I never thought we would lose. You know, cause it’s right.”

From there, they set their sights on the right to marry.

Their fight for the right to marry was met with just as much defeat as success. In 2004, then mayor of San Francisco, Gavin Newsom, instructed clerks to issue marriage licenses to same sex couples. Pontac and Bailes rushed to get one. However, the marriages were later voided.

Then, in 2008, the California Supreme Court struck down Proposition 22, which defined marriage as between a man and woman only. The court said the same-sex marriage ban violated the state’s constitution. All Californians were now able to marry.

Bailes and Pontac decided they would get married at the first available opportunity.

“I insisted on that,” Bailes said. “Because I wanted to be married to Ellen for every minute that it was, every second that it was legal.”

They were married at 5:01 p.m. on June 16, 2008, by Yolo County clerk-recorder Freddie Oakley. This time it would stick. Proposition 8 would pass in November that same year preventing new same-sex marriages, but those that happened in the interim would remain legal.

“I remember the moment that Freddie married us, you know, performed our marriage,” Pontac said. “I remember it being in her office, and I can remember exactly where we were standing. It’s like a picture in my mind. And that I remember. It was just, it was like a miracle.”

Bailes said she couldn't believe the moment they fought so hard for was finally happening.

Pontac and Bailes said it’s the best choice they ever made.

“I don’t really know how it happened…I’m just overjoyed. I can’t, you know, imagine a better life,” Pontac said.

Bailes said she takes every opportunity to let people know about her wife.

“I always say, ‘This is my wife Ellen,’" Bailes said. "You know, or if I’m on the phone with the plumber I’ll say, ‘Oh, I have to ask my wife about that.’ And if I call the telephone company I’ll always say, ‘Oh, my wife said, you know, just to throw that in, to tell them who I am.”