According to the criminal complaint, all of the letters were handwritten, had been signed and had a return address on them. 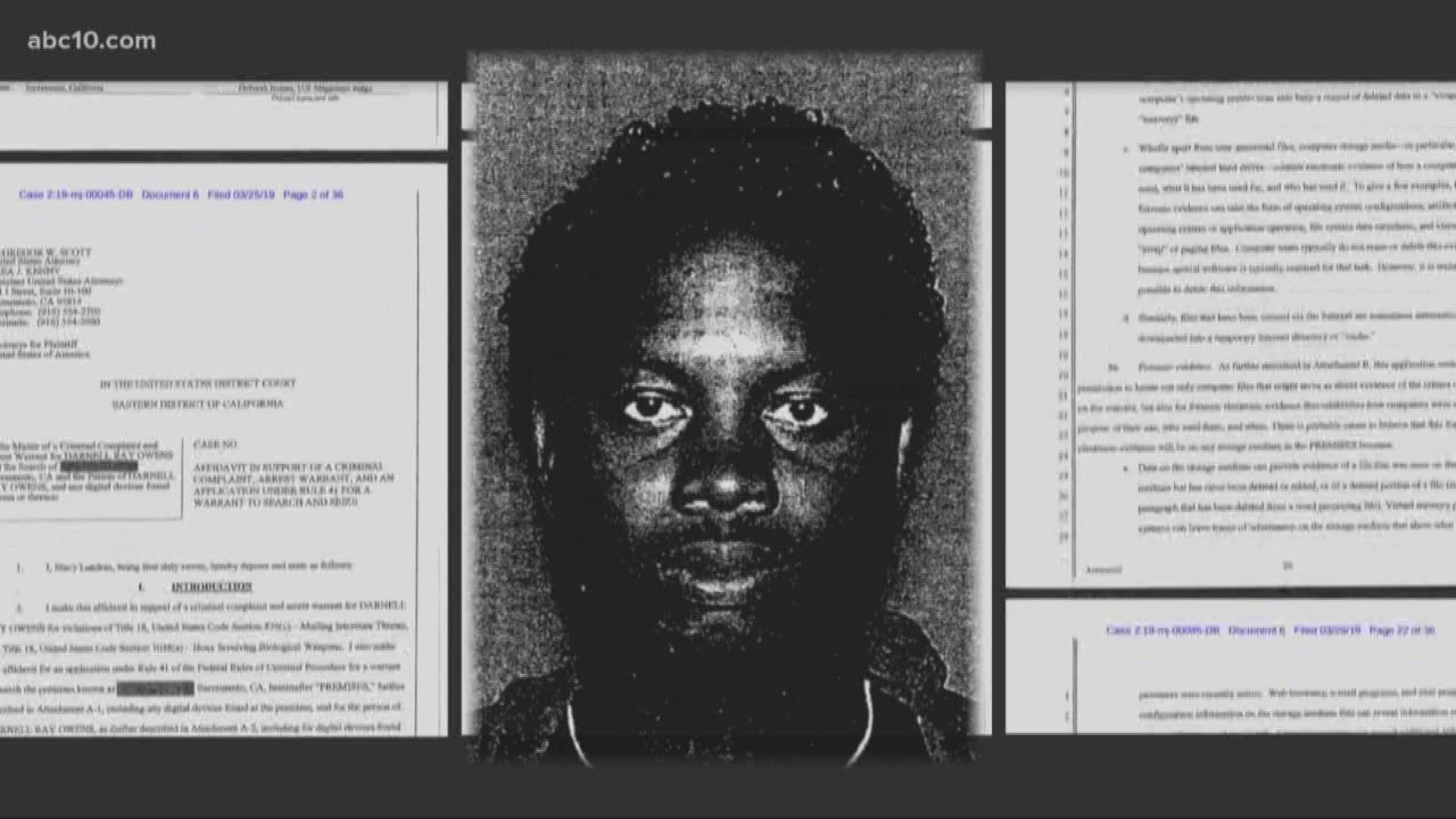 SACRAMENTO, Calif — The investigation that led to the arrest of a Sacramento man who allegedly sent dozens of threatening letters to agencies and organizations across the country began with a report from the Sacramento LGBT Community Center.

According to a criminal complaint from the FBI, between February 2018 and March of this year, 32-year-old Darnell Ray Owens sent roughly 50 hate-filled letters and online complaints, in which he made threats to kill police officers, government officials, members of the LGBTQ community and "white people."

One of the groups targeted was the Sacramento LGBT Community Center, which a year ago received two letters that contained hate speech and threatened to "murder every f-- or queer, lesbian, transsexuals, transgenders in Sacramento." David Heitstuman, the organization's Executive Director, reported the letters to the Sacramento Police Department and the FBI.

"The letters were truly hate-filled and were on the basis of religious scripture and espousing the idea we were all going to be murdered and killed," Heitstuman said.

That prompted a year-long investigation, in which investigators connected Owens to dozens of other letters — including two that contained a harmless white powder — to several other agencies, including the Sacramento, Elk Grove and Roseville Police Departments, California Highway Patrol, a local television station and a church in Dallas.

He also sent a letter directly to Sacramento District Attorney Anne Marie Schubert, in which he stated, "I will assassinate you with a bullet to your head."

According to the criminal complaint, all of the letters were handwritten, had been signed and had a return address on them.

Investigators say Owens put this father, and other people his father knows, as the return address. They say all of this may have been part of a family dispute and an effort to wrongfully blame his dad. Forensic evidence, however, determined all the letters came from Owens.

Owens was arrested on Friday in Oklahoma and will be brought back to California. If convicted, he faces a maximum penalty of five years in prison for each count.

For those targeted, his arrest has brought a sense of relief, as well as a reminder that one report can go a long way.

"Reporting does make a difference," Heitstuman said. "I think too often that incidents of bias and hate-filled rhetoric and just speech, or a note or letter that could be left on someones car or window or whatever,  is often reported."

"But it is important," he added, "That people speak up and make their voice heard and are able to articulate what happened to them."