It's a complex story that's been distilled into a simple meme. We break down what is true and what is false. 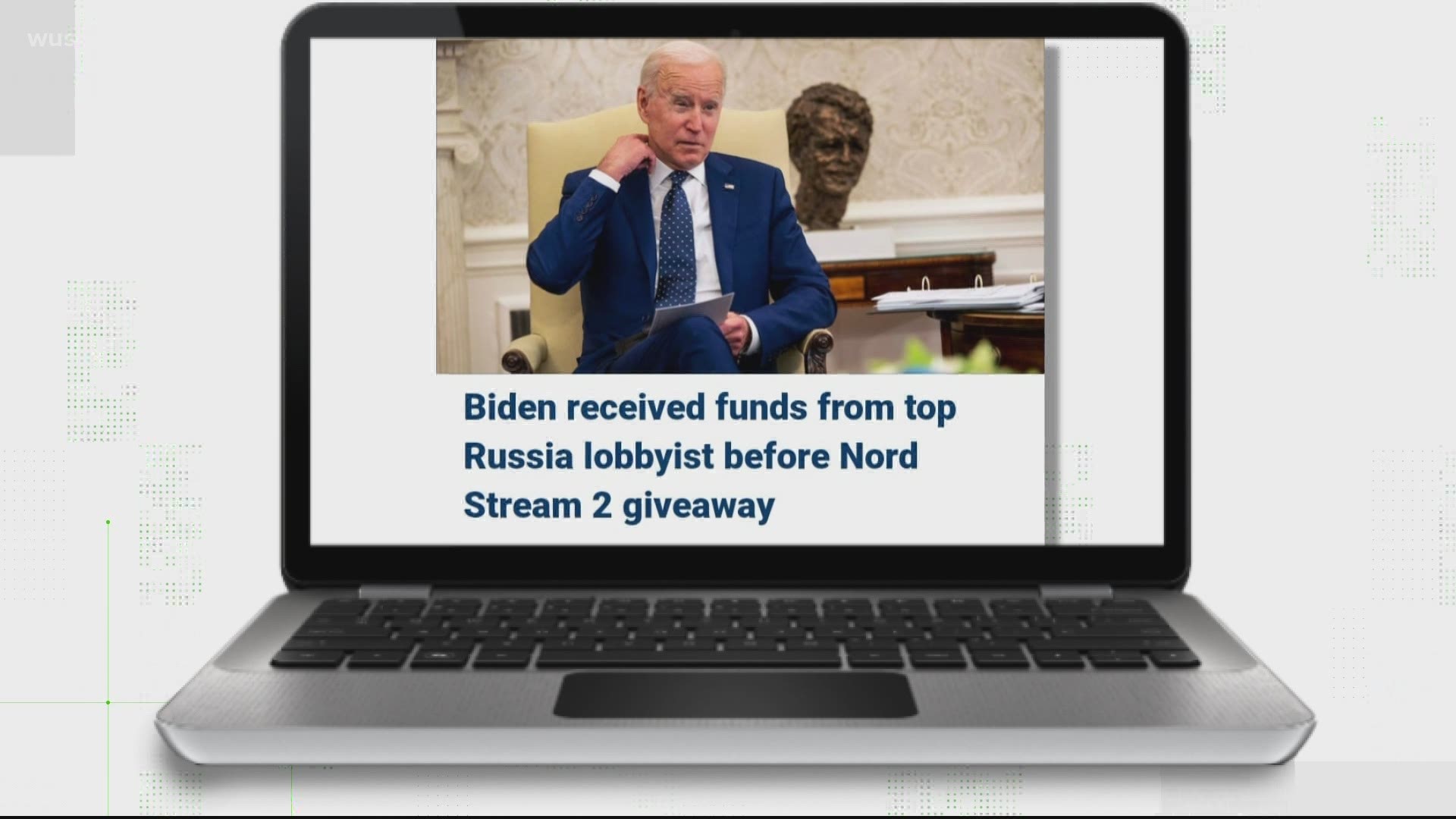 It’s a complex issue that’s been distilled down into one sentence. The meme basically claims President Biden took money from a top Russia lobbyist before waving sanctions on a controversial eastern Europe natural gas pipeline, the Nord Stream 2.

Credit: WUSA
This meme has some misleading portions to it.

Did President Biden take money from a Russia Lobbyist before waiving sanctions on the Nord Stream 2?

Documents from the Lobbying Disclosures Act, The Federal Elections Commission, and the non-partisan Campaign Legal Center.

Parts of the meme are correct. Yes, a lobbyist with connections to the Nord Stream 2 Pipeline donated to President Biden’s campaign. No, the lobbyist does not represent Russia or a Russian company. There is no clear connection between the October donation and the waiving of some sanctions on the pipeline.

This is complex, so take it step-by-step. The Nord Stream 2 is a proposed natural gas pipeline from Russia to Germany. It would be owned by a Russian energy company: Gazprom.

But, there are other companies involved. Five other European energy companies partnered to build it.

However, President Biden and some European leaders are calling for a halt to the completion of the pipeline because it would weaken European Energy security.

To the campaign money portion of the claim.  According to analysis from the Campaign Legal Center, there is a lobbyist involved.

A man named Richard Burt lobbies on behalf of those five European companies in Congress. He does not represent the Russian company, Gazprom.

One of the lobbying disclosures does describe his work as to “advise on Russia sanctions issues.”

Here is where the connection to President Biden comes into play. In October of 2020, Burt donated $4,000 total to two of President Biden’s Campaign Funds: The Biden Victory Fund and Biden for President, according to Federal Elections Commission filings.

In May, according to the State Department, the Biden administration waived some, but not all, of the sanctions on the Nord Stream 2 pipeline.

It’s important to note there is not any evidence Burt’s $4,000 contribution directly affected the decision of the Biden administration. Secretary of State Anthony Blinken continues to oppose the completion of the Nord Stream 2 project.