VERIFY: No, Froot Loops dyes haven't been linked to cancer or asthma

The VERIFY team found some serious problems with a simple claim about cereal ingredients. 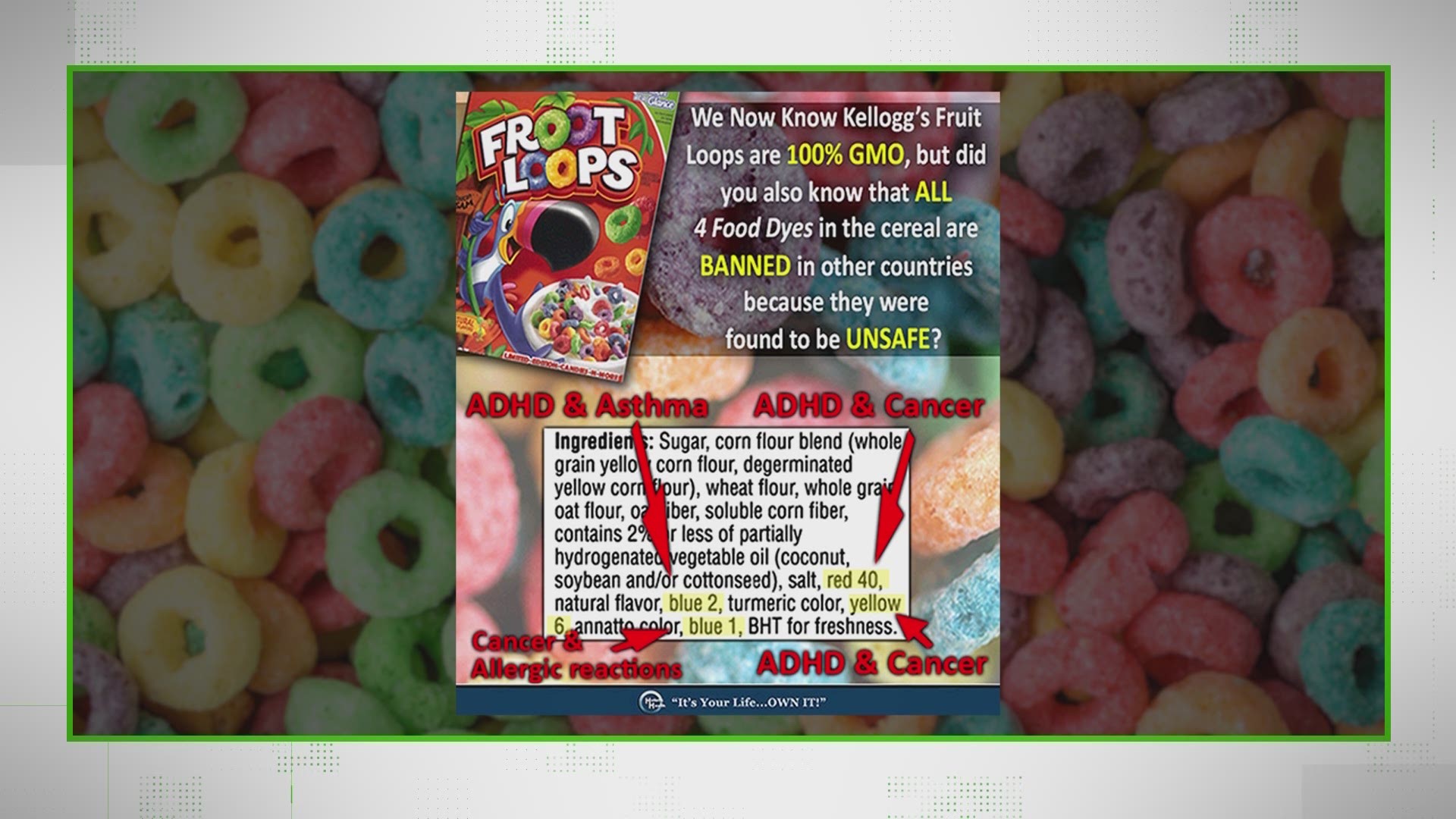 There's an online illustration causing concerns about popular cereal brands by claiming the products are made with unhealthy dyes that have been banned in other countries.

The picture in question alleges that four dyes found in Froot Loops have been linked to ADHD, cancer and asthma.

So first, what are these food dyes?

Every country labels artificial food dyes differently, but they all have common names that transcend borders.

Are these dyes banned in other countries?

The only country that bans any of these colors is Japan. Government documents from Japan show that Blue 1, Blue 2 and Red 40 are all approved for use.

But, Yellow 6 is banned in Japan.

Outside Yellow 6 in Japan, the dyes listed in this Froot Loops claim aren’t banned for use anywhere. But, there are some restrictions.

In the US, all four dyes can be used, but the FDA states “some evidence suggests that certain children may be sensitive to them.”

In European Countries under the EU, the dyes are approved for use, but must be accompanied by a warning label stating they have “an adverse effect on activity and attention in children.”

SafeFood’s full index of food dyes shows that none of the dyes are banned anywhere else. In fact, the two blues the picture mentioned are listed as permitted foods worldwide.

What are the possible health concerns with these dyes?

That’s not necessarily the same thing as causing ADHD, which the National Institute of Mental Health says may be caused by a combination of genes and environmental factors. However, hyperactivity does match a symptom of ADHD.

None of these agencies or sources mentioned cancer or asthma as risks in regard to these food dyes.

Not even the Center for Science in the Public Interest, who petitioned the FDA to ban the use of these food dyes. They specifically stated the risks Yellow 5, Yellow 6 and Red 40 pose to hyperactivity of children and that some dyes (although they did not specify which) caused allergic reactions.

What the Center for Science in the Public Interest did claim to cause cancer was Red 3, which is also called Erythrosine. Red 3 was not included in the original claim but is in the FDA’s list of approved food dyes. Safefood does not state it is banned in Europe, however, does say it is banned for use in cosmetics and external drugs in the United States.

Is it actually true that these dyes are in Froot Loops?

While it was reported in 2015 by media outlets that Froot Loops-owner Kellogg’s planned to have no more artificial colors in their cereal by 2018, that never came to fruition.

Three of the four dyes listed in the original image are currently in the ingredients list for Froot Loops. Froot Loops contain Red 40, Blue 1 and Yellow 6.

Rival General Mills have stated plans to do away with artificial colors in their cereal, although they have not stated a date they plan to phase them out by.

So what’s the final verdict?

We can Verify much of what this image claims is exaggerated or outright false. There is a hint of truth in that a couple of the dyes labeled are believed to lead to hyperactivity in children, but not much else is accurate.

These dyes may be banned in individual countries, but are broadly listed as safe or are allowed to be sold with warning labels in most countries.

Allergic reactions to some of these dyes are certainly possible, but cancer and asthma less so. In fact, the only dye which the source petitioning for the banning of these dyes directly listed as carcinogenic was not included in the original image.

Whether or not you choose to eat foods with artificial colors and flavors is up to you. Just be sure to use reputable sources when researching them.

Claims about bans in Norway and Japan

A number of articles online claim that the dyes mentioned above are banned in Norway and Japan. As shown above, only Yellow 6 is banned in Japan.

As for Norway, their government pages state that “Norway has the same regulation as the EU countries concerning this legal area.”

They do not have their own list of banned dyes as some articles claim. They follow the EU guidelines that are written about above.