VERIFY: No, the Vice President does not want to shut down the VA

The quote attributed to her in a viral post is made up and goes against the vice president’s record of assisting veterans. 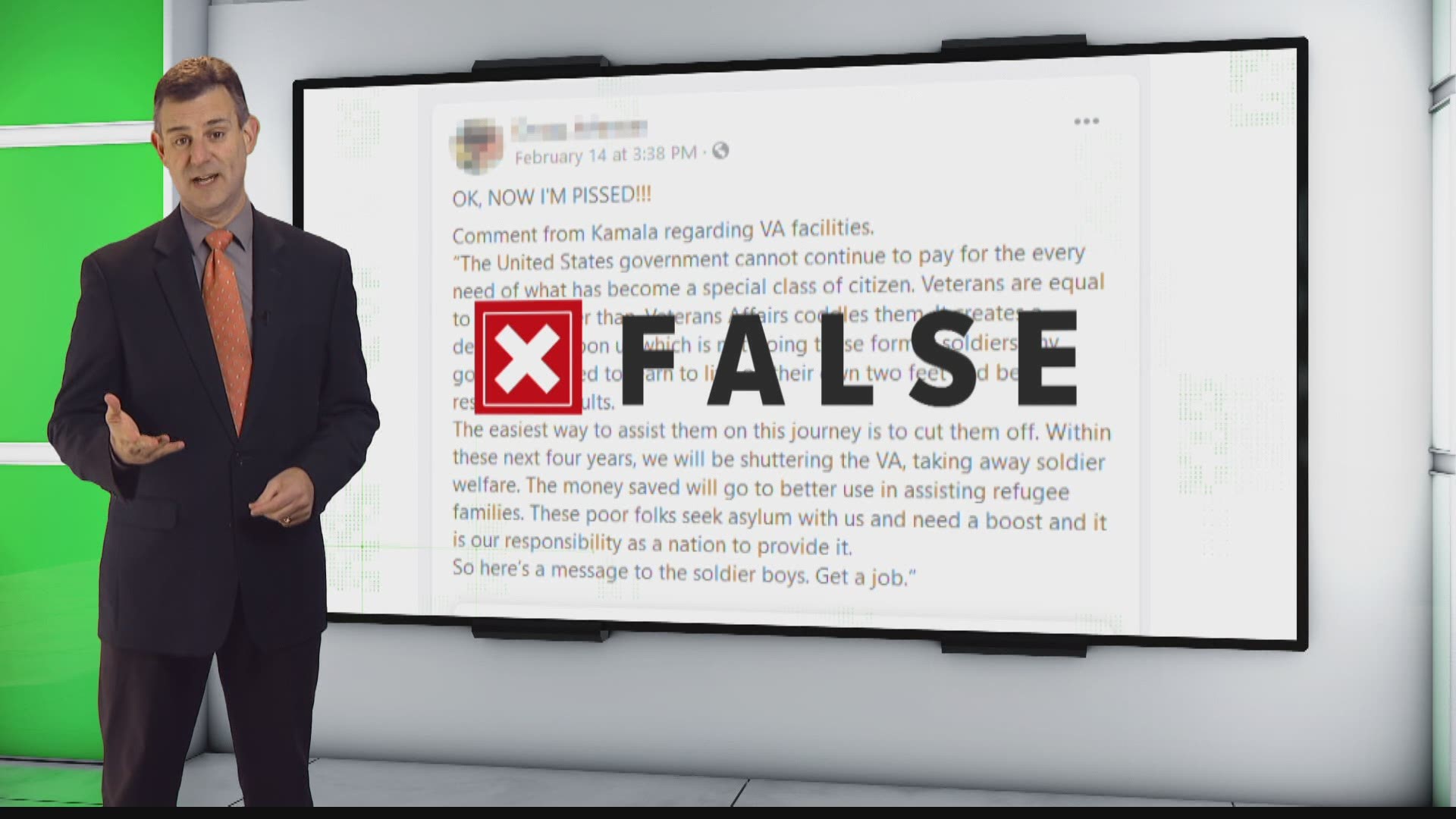 INDIANAPOLIS — A post circulating across social media falsely claims that Vice President Kamala Harris wants to stop funding the Department of Veterans Affairs and use the money to help refugee families instead. The vice president did not say the quote attributed to her. Instead, the quote and the story appear to originate from a satire website that says nothing on the site is real.

Christine sent us a post she saw on Facebook. The VERIFY team checked to see if Vice President Harris really said the quote attributed to her.

“The United States government cannot continue to pay for the every need of what has become a special class of citizen. Veterans are equal to us, not better than. Veterans Affairs coddles them. It creates a dependency upon us which is not doing these former soldiers any good. They need to learn to live on their own two feet and be responsible adults.

The easiest way to assist them on this journey is to cut them off. Within these next four years, we will be shuttering the VA, taking away soldier welfare. The money saved will go to better use in assisting refugee families. These poor folks seek asylum with us and need a boost and it is our responsibility as a nation to provide it.

So here’s a message to the soldier boys. Get a job.”

No, vice president Harris did not say this.

Our research shows the statement even contradicts other comments and actions showing her support of American veterans.

VERIFY reached out directly to the White House to ask about the post.

So where did the quote come from?

It appears to have started on a website that describes it’s content as “parody, satire and tomfoolery.”

The website is named “America’s Last Line of Defense” and uses the tag line, “Satire for your confirmation bias.” The site’s “About Us” page notes, “Everything on this website is fiction. It is not a lie and it is not fake news because it is not real. If you believe that is real, you should have your head examined.”

Shortly after posts about the story went viral, social media sites flagged the information. Under posts with the supposed quote, Facebook added a warning that reads, “False Information. Checked by independent fact-checkers,” and included a link to several articles with details about why the information is incorrect.

VERIFY searched several other places and found no indication that the vice president made that statement or anything like it. We found nothing on a search of the White House website that tracks statements, speeches and other communications from key members of the president’s administration. A search of the Congressional Record that records proceedings and debates in Congress, also found nothing similar. Reviews of the vice president’s social media found nothing similar to the comments.

Our searches did find a number of instances of Vice President Harris supporting U.S. veterans.

During his confirmation hearings, McDonough told the Senate Veterans Affairs Committee, "If confirmed, I will dedicate myself with every fiber of my being to fulfilling what President Biden rightly refers to as our country's most sacred obligation: to prepare and equip our troops that we send into harms way and to care for them and their families when they return."

In September 2019, while she was running for president, Harris laid out a plan to expand health care and housing assistance for veterans. She posted the details in this online blog the weekend she met with a veterans group in Manchester, New Hampshire. Harris made a number of promises about her efforts to help veterans if she was elected:

At an event Feb. 20, First Lady Dr. Jill Biden reiterated a commitment to the welfare of veterans. She spoke virtually at the annual conference for Student Veterans of America. She highlighted efforts to implement the forever GI Bill and the re-launch of an initiative she and former First Lady Michelle Obama created. Biden said, "The president and I have always believed that our nation has a sacred obligation to equip our troops when we send them into harm's way and to care for them and their families, both while they serve and when they come home."

One of the executive orders President Biden signed on the first day of his presidency was to help nearly 2 million veterans by asking the VA to “consider pausing federal collections on overpayments and debts.”

February 16, the administration announced that the VA and other federal agencies were extending and expanding foreclosure relief programs related to COVID-19.

Also on his first day in office, President Biden introduced his pandemic “Rescue Plan.” It requests an additional $20 billion to help meet the health care needs for veterans during the pandemic.

Have a question you’d like us to verify? Send an email to verify@wthr.com.