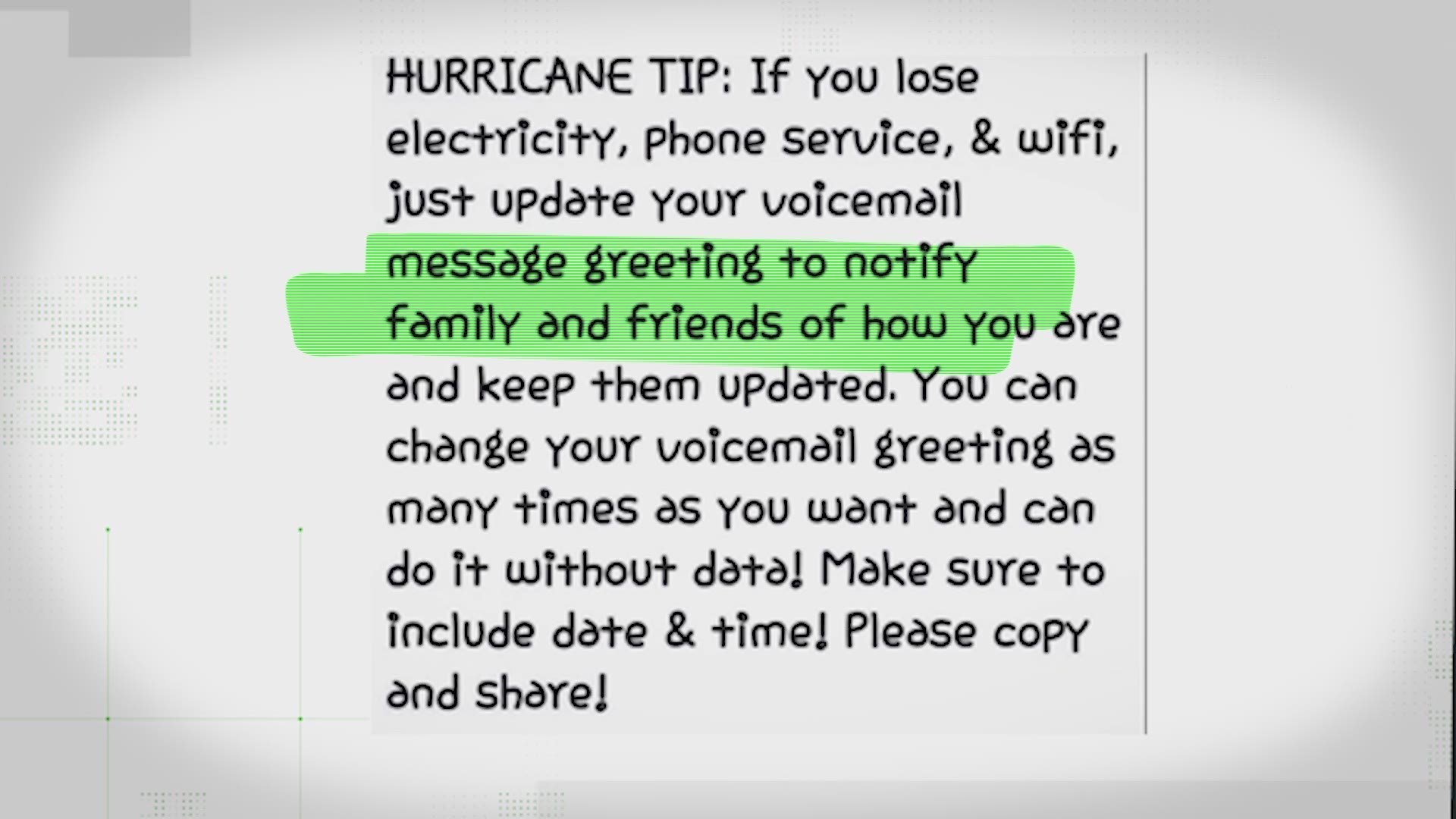 FLORIDA, USA — There have been a lot of tips and tricks being shared online during Dorian so far. While some are great, some are completely false. Here are a few of the most repeated.

DISHWASHERS CAN PROTECT YOUR VALUABLES

This claim is false.

It pops up a lot. Sometimes with pictures, sometimes not. However, when asked about this possibility, multiple dishwasher manufacturers said that claim is false.

"Appliances are not waterproof. We would not recommend what you are proposing nor would we recommend using an appliance for anything other than what it is designed for," GE Spokesperson Kim Freeman said.

We're ruling this one false.

This claim is true - but different providers are offering different forms of assistance.

Verizon announced that its is giving "unlimited calling, texting and data from 9/2-9/9." More on their response can be found here.

In a separate tweet, the company clarified tha,t by waiving data overages, it is essentially "giving unlimited talk, text and data for AT&T wireless and AT&T PREPAID customers in affected areas."

More on their response can be found here.

Sprint said that it is waiving "call,text and data overages for Sprint customers from September 2-8,2019."

More on its response can be found here.

More on its response can be found here.

RECORD A VOICEMAIL WHEN YOU DON'T HAVE SERVICE

This claim is false - but it's underlying idea isn't bad.

It says it is a good way to let people know where you are and how you're doing - even when you don't have service.

That could be a great tip. Even if you don't have phone service, people who call you can still hear your voicemail and can get updates on you that way.

But, the middle part of the claim says that you can change your voicemail as "many times as you want and can do it without data!"

That's the part that's not true. While your voicemail will still work when you don't have service, it does require service to change the message.

Some phones will let you record new voicemails without service, but they won't actually upload that message until you have service again.

So, can you upload a new voicemail when you don't have service? No. But it may be a worthwhile method of updating family if you're getting spotty service that keeps going in and out.

A viral post that has been shared since hurricanes Harvey and Irma in 2017 has resurfaced as Hurricane Dorian works its way along the East Coast.

This claim is false. It's based on a real law, but it's interpretation is wrong.

Hotels and motels never have a legal obligation to allow any animals inside other than service animals.

The claim cites the Pets Evacuation and Transportation Standards Act of 2006 (PETS).

That is a real law that was created to help sort out the confusion and safety of animals during emergency events. It does require local governments to have emergency plans for pets and sometimes requires they create shelters or other locations to house pets.

However, it does not mandate any sort of housing requirements for hotels, motels or any other private housing.

This post first started making its rounds in 2017 around the time that hurricanes Harvey and Irma hit the U.S.

FEMA didn't initially respond in 2017, but it has since posted an update on its "rumor control" page from the previous storms.

There are reports that hotels and motels participating in the Transitional Sheltering Assistance Program are legally required to accommodate pets. This is FALSE. (September 8)

Hotels and motels participating in FEMA’s Transitional Sheltering Assistance Program do not fall under the Pets Evacuation and Transportation Standards (PETS) Act (Pub. L. 109-308 (2006)). Please call the hotel before you go and ask if pets are permitted.

While Customs and Border Protection (CBP) and Immigration and Customs Enforcement (ICE) do often assist during hurricanes, they have always suspended any citizenship checks during emergencies.

This claim is false.

It has circulated during other hurricanes like Harvey, Irma and Florence, but both FEMA and ICE have clarified that it's not true.

On a "rumors" page, FEMA states: "U.S. Immigration and Customs Enforcement (ICE) and U.S. Customs and Border Protection (CBP) have stated that they are not conducting immigration enforcement at relief sites such as shelters or food banks. In the rare instance where local law enforcement informs ICE of a serious criminal alien at a relief site that presents a public safety threat, ICE will make a determination on a case-by-case basis about the appropriate enforcement actions."

Another circulating claim says that anyone who loses food in their freezer or refrigerator due to a power outage can get payment or funding from agencies to cover those losses.

Sometimes the claim says FEMA will pay you back. Others say it's the Red Cross or FPL.

These claims are false. (Unless you're receiving SNAP food benefits)

FEMA clearly states that "food loss is not covered by FEMA's Individual and Household's Program (IHP.)"

The Red Cross may be able to help you replace some of the food through their donations, but they won't specifically give funds to cover the lost food items.

Florida Power & Light state on its site that it is "not responsible for: food loss, power outages, voltage fluctuations or property damage caused by hurricanes..."

The only exception to these rules are for people on food stamps. People receiving SNAP benefits can report losses to the Florida Department of Families and Children and receive replacements.

Now, following IRMA, the D-SNAP or Disaster Supplemental Nutrition Assistance Program was activated and allowed people to apply for vouchers for lost food and other items. But that program is actually run by the U.S. Dept. of Agriculture, not any of the groups above.

This is a simple claim that pops up a lot. Take photos or videos of the inside and outside of your house. The claim says those recordings can act as a quick and easy way to make insurance claims should damage occur.

In previous hurricanes, state officials like NC's Attorney General Josh Stein said this was an important step to knowing how to file claims if needed.

Don't risk staying in an evacuation area to take photos, but it's definitely something you could do in advance that could help you out down the line.