Master violin-maker is gifting his craft to 7th grade boy

13-year-old Ben Milne is four years into his mentorship with master luthier Will Bartruff. 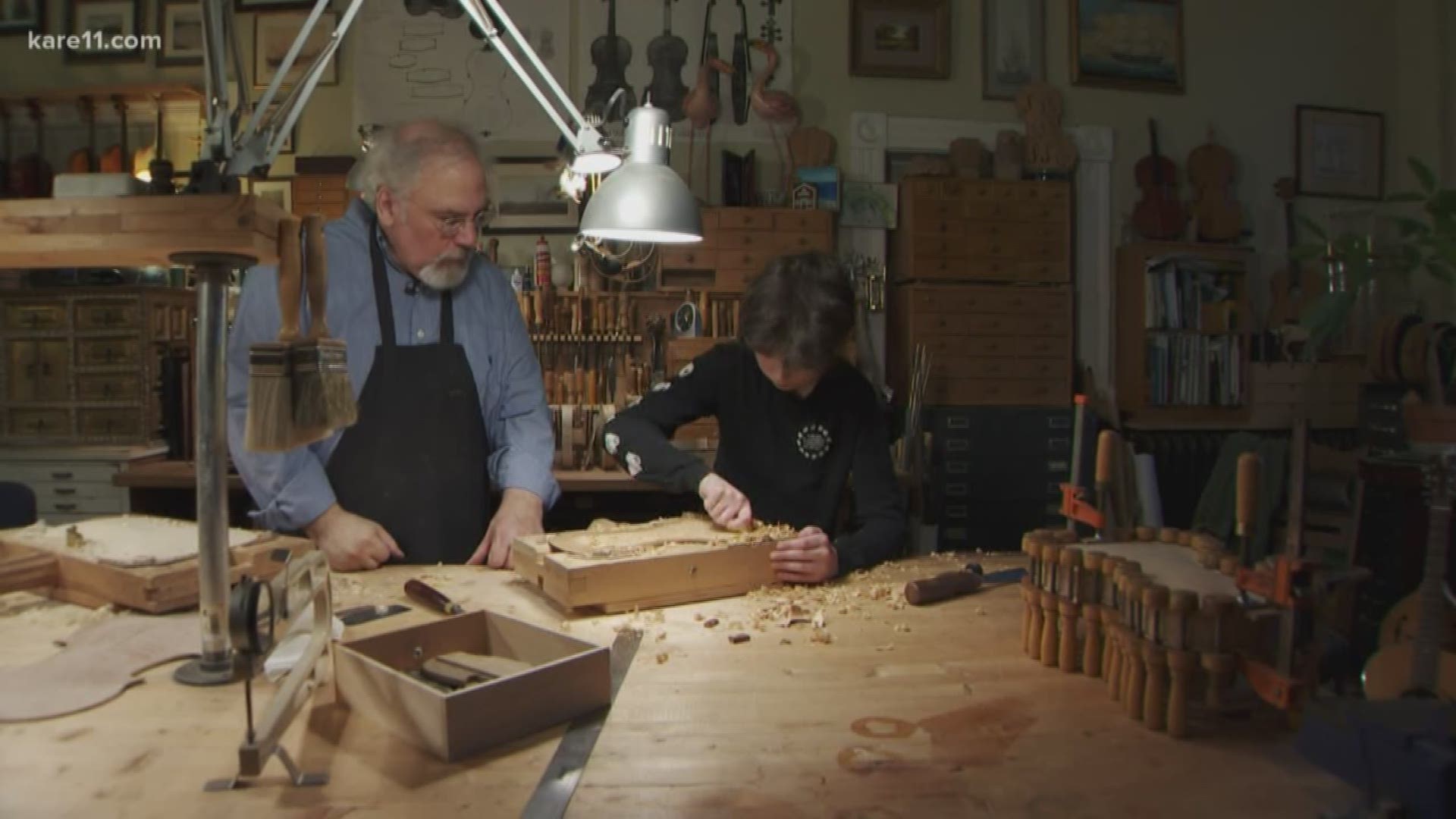 ST PAUL, Minn. — Will Bartruff began work on his first violin at the age of 10.

Half-a-century later he did one better. The master luthier took on a 9-year-old protégé.

Now, newly turned 13, Ben no longer needs a stool to reach the workbench.

He takes tools in hand like an old pro and begins scraping away wood filings that will ultimately leave him with a violin.

Credit: Chad Nelson, KARE
13-year-old Ben Milne uses a wood plane to scrape away filings, part of the process for making a violin.

“Not so fast, not so fast,” Will counsels his young charge as filings pile up.

“That’s better,” Will tells him.

Classical music wafts through the air as student and teacher converse about violins and life.

“I never want to leave this place,” Ben says.

Ben’s mother, Susan Janda - a professional musician - first brought her son to the shop when she’d stop to see Will for adjustments on the violin he made her.

Credit: Chad Nelson, KARE
Susan Janda plays the viola her son Ben made for her

During his 53-year career, the master has completed 450 stringed instruments now in the hands of musicians in orchestras around the world.

Some of them hang on Will’s walls awaiting repairs and adjustments.

Ben couldn’t get enough of the old shop.

Ben’s fascination led to a proposition.

“One day, I was nine-years-old, I was leaving the shop, right out that door with my mom,” Ben says, pointing toward the exit, “and Will said, ‘Hey kiddo, want to make a violin.’ And I was like, ‘Sure?’”

By 10, Ben had completed his first violin.  He now rents the instrument to Allison Ostrander, who’s used it for performances with the Mill City Summer Opera.

Allison has enjoyed explaining to members of her ensemble that her violin came from a 10-year-old. “They're like, ‘What do you mean, the violin he plays on?’ And I’m like, ‘No he made it.’”

Having finished his violin, Ben made a viola he gave to his mother for Christmas.

“The clarity and texture of this instrument is something that I really, really, like,” says Susan Janda, who also plays with the Mill City Summer Opera.

Ben’s mom smiles and adds, “If a maker is making his instrument with a certain kind of love, some of that gets in there too.”

For most of his career, Will worked alone at his bench.  A few years ago, he took in his first adult students.

Then Ben came along – followed by two teens a little older than Ben.

“My making days are coming to an end,” Will says. “I have rheumatoid arthritis now and work hurts bad.”

It’s time, Will decided, to pass on the skills once passed on to him.

“These kids will actually have a chance to do this long after I’m gone,” he says.

Ben’s parents say it’s too soon to know how far their son will take his instrument-making, but they know each visit to Will’s shop has been a blessing.

“It seems to be a place where Ben is really comfortable,” Susan Janda says. “He can be his age and he can be reaching.”

Master violin-maker is gifting his craft to 7th grade boy

1 / 8
Chad Nelson, KARE
13-year-old Ben Milne gets tips for staining the inside of a violin from master luthier Will Bartruff