What to do if you encounter a rattlesnake in water 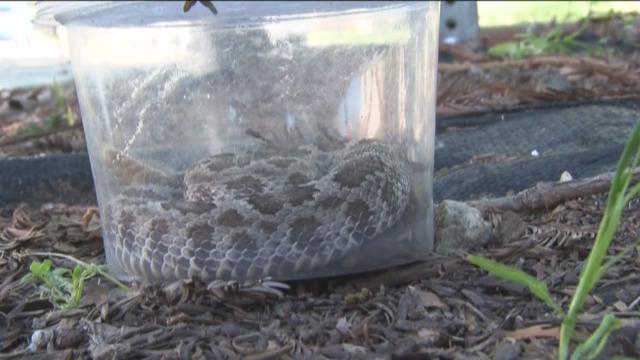 Springtime is bringing showers, flowers and rattlesnakes to the Sacramento region.

Cathy Salazar spotted a rattlesnake swimming in Folsom Lake while kayaking over the weekend. She posted a photo of the snake on the Folsom Chat Facebook group, warning others to be careful.

Rattlesnake swimming in Folsom Lake.
Running into a rattlesnake while enjoying a day on the lake is actually very common in the Sacramento area during this time a year."They're definitely not scared of water," said Lou Fraser, owner of Reptile Removal USA, a Rocklin-based company specializing in snake removal.Rattlesnakes come out of their dens during the spring to explore new areas and find prime hunting grounds. This year, rattlesnake season came early due to the heavy winter rainfall.Rattlesnakes commonly use waterways as transportation, according to Fraser. They also may take a dip in a lake to cool down.Snakes can't regulate their body temperature, so they find shade or cold water to cool down and sun when they need to heat back up. Rattlesnakes are "extremely fluid" in water and their smooth movement may look intimidating but it's not likely the reptile will try to attack while swimming."Its sole mission is to from point A to point B," Fraser said.The snake is going somewhere with a plan in mind and it's not in "attack mode" while swimming. The rattlesnake is much less aggressive while in water than when on land. "It's not going to come after you," Fraser said.However, if the snake is provoked or a person does find themselves too close to a rattlesnake while in water, the best thing to do is to remain very still.Rattlesnakes aren't the only snake species seen in water in the Sacramento area. The common garter snake, the common gopher snake and the California king snake is also seen in the region, according to Fraser.He stressed, people are running into snakes while out at the lake because humans are in snake territory. It's not the other way around."It really is human encroachment of their habitat," Fraser said.This year will be a big one for all snakes because of all the rain Northern California received recently. Rain helps natural food sources, such as grass and plants grow, which attracts rodents. This means snakes will have an abundance of food to feast on and be able to survive longer, so people will see more of them.