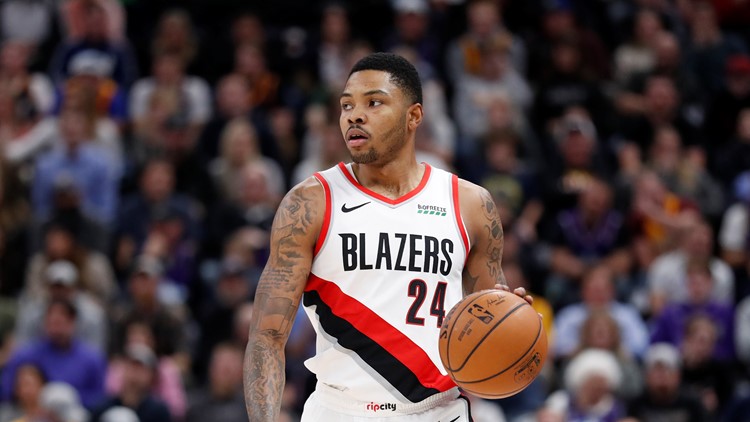 ESPN’s Adrian Wojnarowski first reported the trade on Saturday. The Athletic's Jason Quick reported Saturday that the deal couldn't be finalized until Tuesday because of restrictions in Gabriel's contract.

Ariza, a 6-foot-8 small forward who is in his 16th season, has averaged 6 points and 4.6 rebounds in 32 games played this season. Gabriel, a 22-year-old 6-foot-9 forward, has played in only 11 games this season. Swanigan, who was drafted by the Blazers in the first round of the 2017 draft, returns to Portland after being traded to Sacramento last season. He’s played in just seven games this season.

RELATED: What they're saying: More Blazers trades may be coming after Bazemore deal

Sacramento Kings forward Trevor Ariza (0) in the first half during an NBA basketball game against the Phoenix Suns, Tuesday, Jan. 7, 2020, in Phoenix. (AP Photo/Rick Scuteri)
AP

Bazemore, who was traded to the Blazers in the offseason, averaged just 7.9 points per game this year, his lowest since the 2014-15 season. He was put into the starting lineup after Rodney Hood tore his Achilles tendon in December. Tolliver played in 33 games this year for Portland, including nine starts, and averaged just 3.9 points per game.

Portland was expected to be one of the more active teams prior to this year’s Feb. 6 trade deadline. The Blazers are in the middle of a disappointing, injury-riddled season. They’re 18-25 and two and a half games behind the final playoff spot in the Western Conference.

Wojnarowski reported that the trade cut the team's luxury tax bill in half, saving the franchise $12.3 million.

3-on-3 Blazers podcast: Are the Blazers really going to 'stand pat' at the trade deadline?

RELATED: Are the Portland Trail Blazers really going to 'stand pat' at the trade deadline?