Attend a softball tournament and you'll see many who can hit and pitch, but it's what one Oakdale softball player can't do that sets her apart from everyone else. 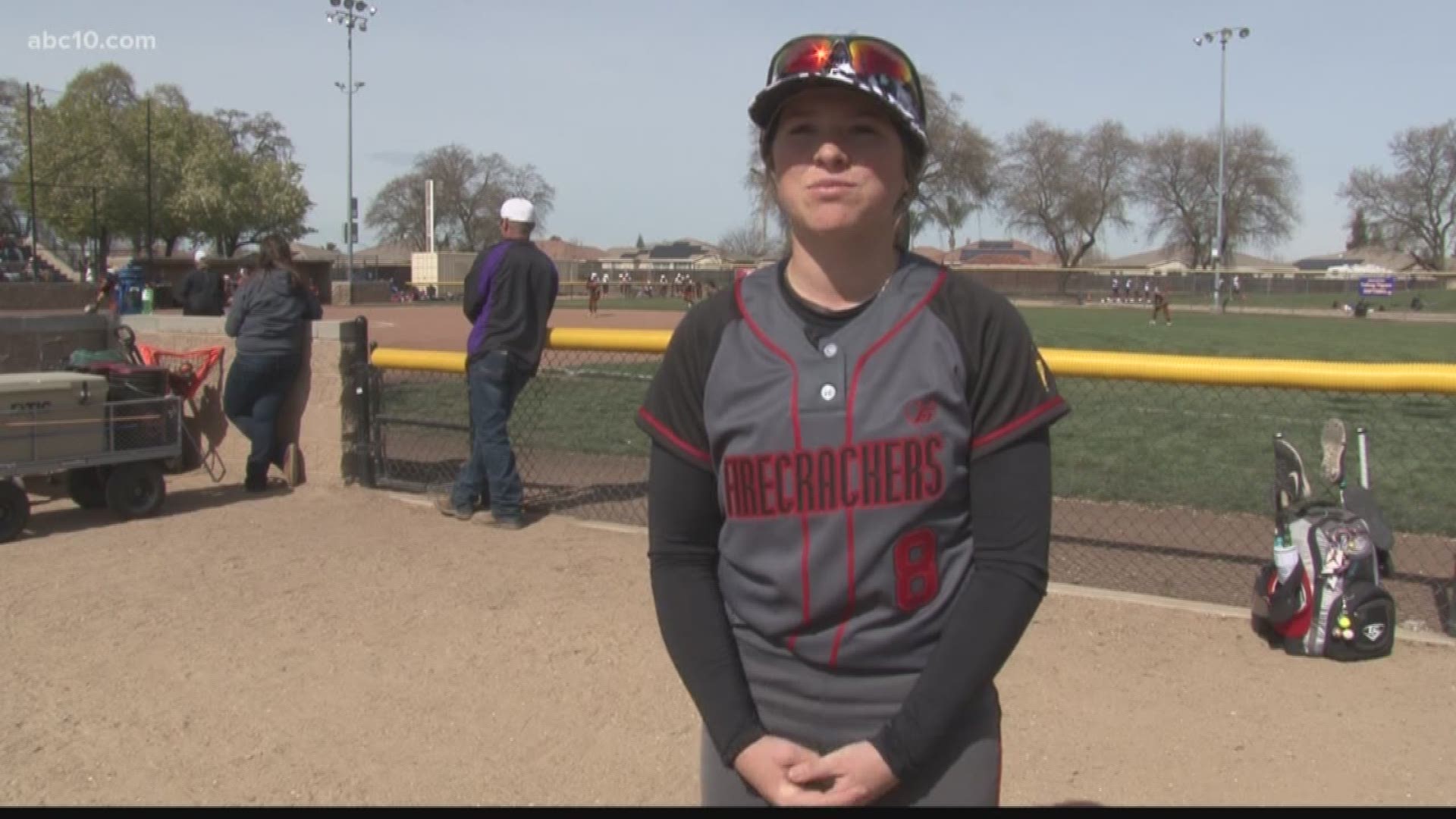 Go out to a softball tournament on any given weekend and you'll see hundreds of girls who can hit and pitch with the best of them. But it's what one Oakdale softball player can't do that sets her apart from everyone else.

"My strengths? Hitting. I'm a big hitter," said 13-year-old Amanda Bricker. "Last game I almost hit one over the fence. So, I mean, I guess hitting is my biggest strength. Pitching is my other one and then defense."

The Oakdale Junior High School student is confident in her softball skills and she already has big plans for her future.

"After high school I want to go to a four-year university and study to be in the hearing department. Something like an audiologist or something in sports medicine," Amanda said. "I want softball to help me get into a good school that will carry my major."

While Amanda's travel softball coach, Greg Mettler, knows she shines come game time, he is more impressed with her academics.

"You've gotta be great in the classroom. You gotta be a great student because that's where your future is," Mettler said. "You're going to get your degree and softball is a help to get that. She gets that."

Amanda has been playing softball since she was five years old. She even played for her father, Kevin, who helped teach her the fundamentals of the game. Her mother, Brandy, also played softball.

"She's just got a drive to her that makes it easy for a parent, but coaching your kid is tough," Kevin said. "Of course you want them to be perfect. Sometimes it's hard to bite your tongue, but she earns her keep. She works very hard on and off the field with her grades."

All of that hard work has made Amanda a hot recruit. She's in the thick of her first season with a nationally recognized travel team, the Firecrackers.

"She brings a lot to the table," Mettler said of Amanda. "Great bat, she can pitch, play multiple positions. She's fitting in great with the team, great with the girls, and that's the biggest key. Chemistry is huge."

Amanda likes being able to fit in with her teammates and many people aren't able to tell what makes her different from her peers.

"We knew something was wrong about three months before we found out," Kevin explained. "When we first found out I didn't do very well. I couldn't believe it. It was tough. When you speak to her you wouldn't know she was deaf because she has no speech impediment whatsoever."

When Amanda was 16-months-old, her parents made the decision to take her to UC Davis Medical Center to receive cochlear implants.

"It's basically a computer chip inside your head. It's not inside your skull, but it's right outside and not on the outside of your skin. Then you have your processor, which picks up the sound waves," Amanda explained.

Upon the suggestion of her doctors, who Kevin says the family still stays in contact with, the Brickers chose the path of hearing and speaking as opposed to teaching Amanda how to communicate through sign language growing up.

Kevin says while it was difficult at times, he and his wife don't regret their decision to give their daughter the ability to hear the soundtrack to her favorite sport.

"She doesn't hear a bird chirping the same way you or I would. The sound of the bat is different for her," Kevin explained. "We know others that have cochlear that unfortunately don't speak as well as Amanda, who aren't doing as well, so just because you get that put in doesn't mean it's going to work like everyone would hope it would, so we're very blessed in that sense."

The softball star is refusing to let the way she was born keep her from swinging for the fences when it comes to achieving her dreams.

"My goals? Be better than what I used to be," Amanda said. "I have my main goals that are the higher ones, but I have smaller ones that I push myself to every single game."

"She wants to compete at a top level like everybody else like she doesn't have a disability. I think that's that drive and how we raised her. That's the way she wants to do it," Kevin said of his daughter. "And I don't think she's going to change."