Basketball season just became something special for three families in Vacaville, including the Menjivars, and it’s all thanks to the first-year teacher with the pink hair. 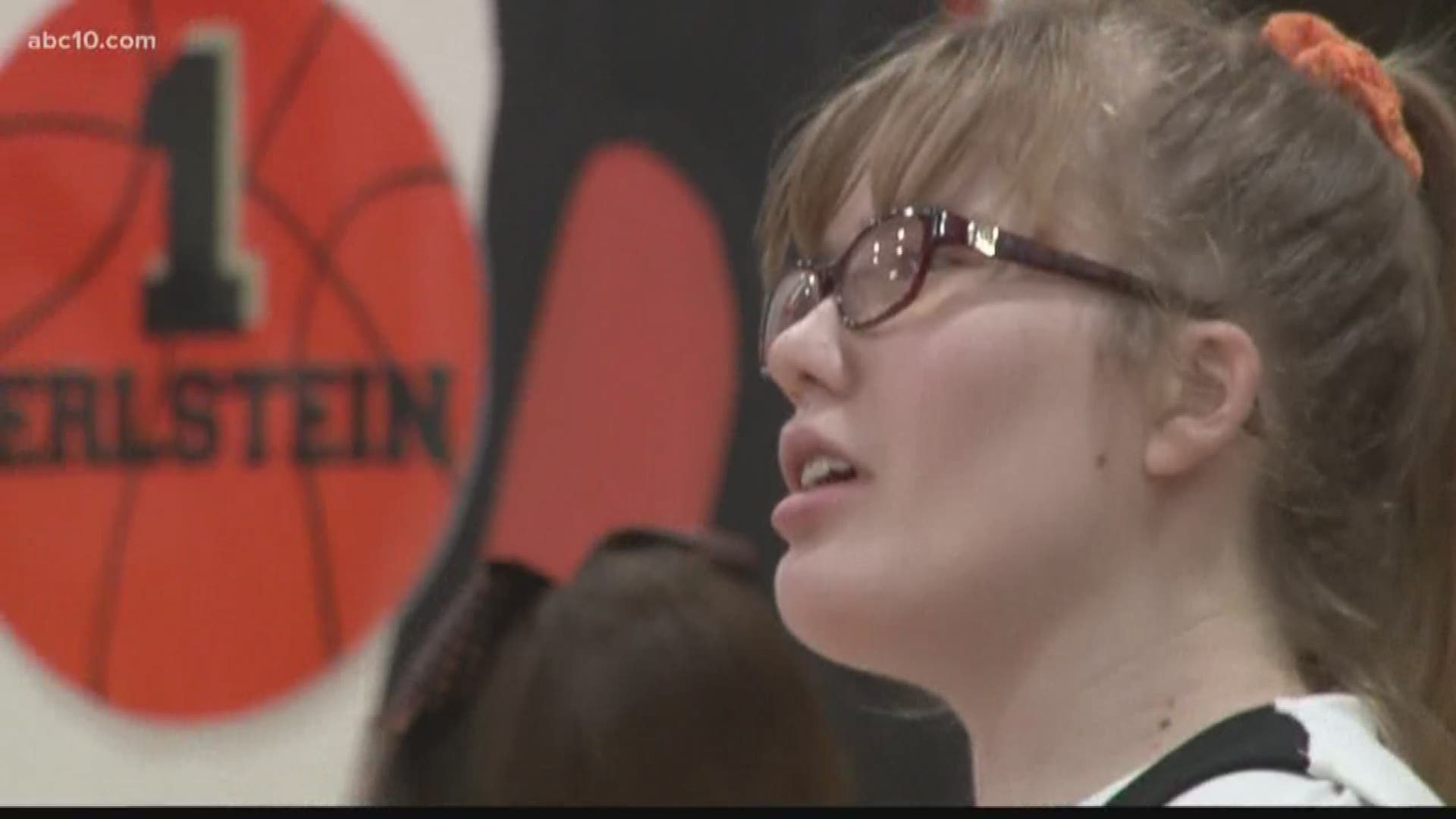 Hundreds of thousands of teenagers across the country have the honor of putting on a uniform and shaking their poms as members of their high school cheer team. But Vacaville High School’s varsity cheer squad is doing more than firing up their fans. They’re changing the lives of special needs students.

Basketball season just became something special for three families in Vacaville, including the Menjivars, and it’s all thanks to the first-year teacher with the pink hair.

With the help of the school’s cheer coordinator, Thomas was able to get three of her special needs students – Dezirae, Alexandra, and Marisa -- on the sidelines for the end of the Bulldogs football season. They’ll be cheering at games for the entire Vacaville basketball season as well.

“Desiree has cerebral palsy and Alexandra and Marisa are intellectually delayed,” Thomas says of her three cheerleaders. Dezirae is also non-verbal and needs help walking but that doesn't stop her from smiling when she’s on the sidelines.

The girls stretch and practice with the varsity squad, stay on the sidelines for the entire game, and perform the movements and cheers to the best of their abilities. It’s become a reason for them to look forward to each school day and the 40 girls and boys on team have completely embraced them.

“Having these girls work with us I think is a reminder to us to work our hardest every day,” senior captain Madison Thomas said. “And for me, personally, and I know some of the other girls on the team… They inspired us to work harder and to never take anything for granted, I think, because they come out here and they just do amazing things with us so it’s been really cool to see.”

Thomas has known Marisa since middle school and has been her teammate on track and field teams. She says Marissa helps lead stretches and cheers and her three special needs teammates have the most spirit of anyone on the team.

“It brings tears to my eyes,” Alexandra’s mother, Jenny Johnson, said. “Because I’ve seen other communities where there are special needs individuals and they are shunned, they are pushed aside, they are ignored. And to find a community here in Solano County and in Vacaville, in particular, it means the world to me that she can be accepted for who she is.”

Alexandra’s father, Derek, added that having this opportunity is beneficial to other students who will learn how to be compassionate when interacting with special needs individuals in the future.

Being a part of the cheer team has become an incentive for the girls in the classroom and parents have noticed positive changes in behavior and growth in their daughters from being a part of the team with their peers.

“For me I feel like she knows now that ‘I can try anything. I can do anything. I became a cheerleader, they accept me here,’” Hernandez said of how cheer has changed her daughter’s life. “I don’t think she’s actually going to be scared now to try other stuff.”

All it took was an e-mail from a new teacher to help change the high school experience for three students whose diagnoses might make them different from their peers but share the same joys and passions as any other teenage girl. It’s been an emotional experience for their parents who watch the girls do something they thought was improbable from the stands each week.

“I can’t even put it into words what it means to me. What it means to our family, what it means to my daughter… It just—it’s beyond expression,” Menjivar said as tears began to well up in her eyes. “When you have a special child and you see them growing up and you feel like they’re going to miss out on a lot of things… But then to see her out there and having that opportunity to do everything that you wanted and dreamed for her… It’s just beyond words.”

If you know someone worthy of being an Athletics Unlimited Sports Standout and would like to see them featured on-air and online, let us know on our Facebook page.