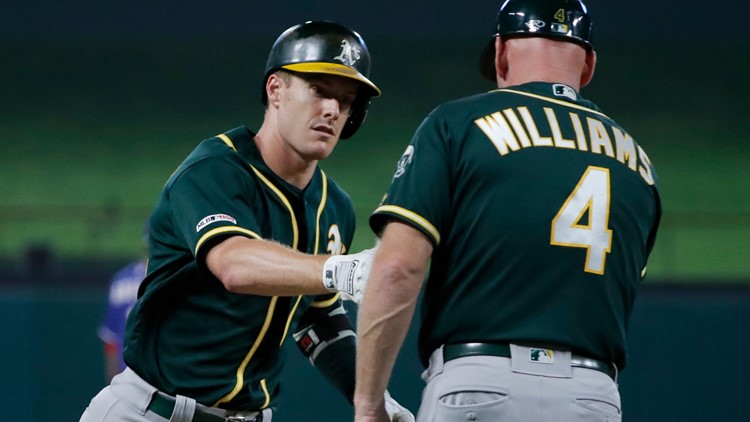 ARLINGTON, Texas (AP) - The Oakland Athletics maintained their half-game lead over the Tampa Bay Rays in the race for the American League's first wild card on Saturday night despite losing their No. 1 starter in the second inning thanks to what manager Bob Melvin called their "relentless offense."

The A's scored all their runs on homers. Matt Chapman (three-run homer in the third inning), Josh Phegley (two-run homer in the fourth) and Matt Olson (solo in the sixth). Oakland's 242 home runs are one short of the franchise record set in 1996.

"Not a surprise that we keep coming back," Melvin said.

Ryan Buchter (1-1) pitched 1 1/3 scoreless innings and was one of six A's relievers after Mike Fiers left following 1 2/3 innings because of right-arm nerve irritation, which Fiers said has bothered him on occasion this season and last season. Liam Hendriks pitched a scoreless ninth for his 22nd save in 27 opportunities.

Mike Minor (13-9) lost for the first time since Aug. 27, allowing a season-high seven earned runs in five innings. Minor entered the game third in the AL in ERA at 3.08.

"It was not typical Mike," Texas manager Chris Woodward said.

Rougned Odor hit a two-run homer in the second. He leads the Rangers with 27 homers and 81 RBIs while hitting .207.

With two outs and no one on base for Texas in the second inning, Danny Santana singled and advanced on a balk when Fiers turned his shoulders toward first base before throwing to the base. Manager Bob Melvin and trainer Nick Paparesta then visited Fiers, who threw some warmup pitches and was left in. The next delivery was a wild pitch that sent Santana to third base. Odor hit Fiers' next pitch, an 89-mph cut fastball on which he said his hand went numb, for a two-run homer to right field. Fiers walked Delino DeShields and was then removed.

"It's kind of scary," Fiers said. "You try to just pitch through it. But if you start altering your delivery, could cause something else happening."

Fiers was coming off the worst of his 184 major league starts, allowing nine runs in one inning on Monday at Houston, which followed a career-long 12-game winning streak from May 7 to Aug. 27.

Phegley's homer sailed just over the outstretched glove of Nomar Mazara at the right-field wall to give the A's a 5-3 lead. The Rangers tied the score in the bottom of the fourth on an RBI groundout by DeShields and a single by Shin-Soo Choo.

Chapman has 33 home runs, a franchise record for third basemen.

Fiers took the mound with half of his beard shaved off, the result of wanting to loosen up his teammates late in a long season. They searched the Internet for funny beards before the game, found "cattail," and Fiers did the rest.

"They didn't think I'd go out there and pitch with it," he said.

After the game, he was clean shaven.

NOT ON THE SAME PAGE

Rangers starting catcher Jeff Mathis left in the second inning with a low back strain and was replaced by rookie Jose Trevino. Minor said he and Trevino, who caught his previous two wins, struggled to agree on pitch selection.

"Maybe the scouting report, going over it before the game with Mathis and not (Trevino) and the mid-game change," Minor said. "He was trying to gather all the information. And when he went out there, he didn't really know it as well as Mathis would."

Texas will throw a bullpen game in Sunday's series finale beginning with RHP Jonathan Hernández (1-0, 1.93). A's LHP Sean Manaea (1-0, 0.75) will make his third start since being reinstated from the 60-day injured list on Sept. 1 following surgery on his pitching shoulder last September. He held Detroit to one run in seven innings last Sunday.