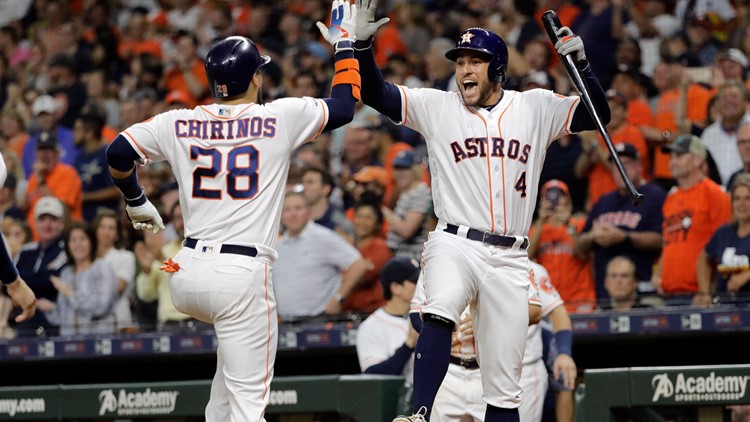 With Monday's offensive outburst following a 21-1 win over Seattle on Sunday, the Astros set a franchise record for runs scored in consecutive games with 36.

Helped by six of their seven total homers, Houston raced to an 11-0 lead after two innings. The seven shots matched a franchise record for homers in a game set Sept. 9, 2000, against the Chicago Cubs.

Chirinos capped the first with a two-run homer and hit a three-run shot in the seventh. He added an RBI single in a five-run second inning.

Alex Bregman started the offensive display with a three-run homer, and Alvarez followed with a solo shot into the second deck in right field.

Alvarez hit his second solo shot into the third deck in right field in the second inning.

Jose Altuve hit a two-run homer to left to start the scoring in the second, and Michael Brantley followed with a solo blast to right that chased Mike Fiers (14-4). Brantley's homer was his 21st, a career high.

The Astros extended their lead over Oakland to 10 ½ games in the AL West. They remain tied with the New York Yankees for the best record in the majors.

Greinke (15-5) retired 11 of the first 12 batters he faced. He allowed just two hits and didn't walk a batter.

Houston's offensive exploits spoiled Fiers' try at a piece of A's history. The right-hander had won 12 straight decisions and was bidding to match Hall of Famer Catfish Hunter's run in 1973 for the best since the club moved to the Bay Area.

Athletics: OF Ramón Laureano was out of the lineup a second straight day after leaving Saturday's game with cramps in his right leg.

Astros: 1B Yuli Gurriel was out of the lineup for a third straight game with a sore left hamstring, but he took ground balls and ran prior to the game. Correa fielded ground balls and took batting practice Monday.

Oakland promoted LHP Jesús Luzardo and recalled RHP Daniel Mengden from Triple-A Las Vegas. To open up a spot on the 40-man roster for Luzardo, Oakland recalled OF Luis Barrera from Double-A Midland and placed him on the 60-day disabled list.

Athletics: RHP Tanner Roark (9-8, 3.86 ERA) starts Tuesday looking to continue his solid work since being acquired at the trade deadline. Roark has allowed two runs or fewer in four of his six starts with the Athletics.

Astros: LHP Wade Miley (13-4, 3.35) starts Tuesday looking to rebound after yielding five runs without recording an out in his last start Thursday against the Mariners.