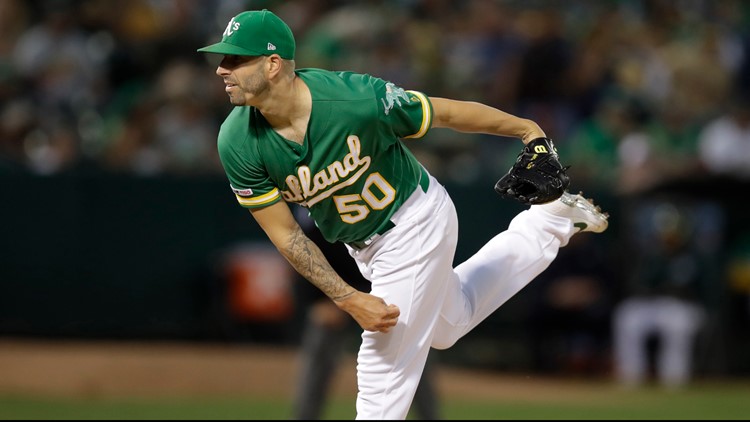 OAKLAND, Calif. (AP) - Mike Fiers struck out five and didn't walk a batter over eight dominant innings to win for the first time in four starts, and the Oakland Athletics beat the Texas Rangers 8-0 on Friday night to maintain a two-game lead for the top AL wild card

Chad Pinder hit a three-run homer in the second inning and Mark Canha also connected as the A's (93-61) kept their margin over Cleveland and Tampa Bay (91-63).

Fiers (15-4) allowed two hits and faced the minimum, helped by a double play and a pickoff. The right-hander had gone 0-1 over his previous three outings following a 12-0 stretch over 20 starts that began with a no-hitter against the Reds on May 7.

Canha, a versatile outfielder team executive Billy Beane considers one of the season's biggest surprises, hit his 25th homer leading off the fifth. Canha and Marcus Semien had RBI doubles as Oakland won for the ninth time in 10 games.

Frankie Montas will be available to pitch for the A's on Wednesday at Anaheim after completing his 80-game drug suspension, perhaps in a relief role. The right-hander was 9-2 with a 2.70 ERA in 15 starts and 90 innings before the discipline, and he has been throwing up to 100 pitches on a starter's schedule at the club's minor league complex in Mesa, Arizona.

Elvis Andrus grounded into a double play in the first and went 0 for 3.

"I do want to see him improve," manager Chris Woodward said. "We have a lot of question marks around the team for sure. I don't think anyone's immune to that if you're not producing. It's just a fact."

Rangers: While outfielder Joey Gallo could be activated from the 60-day injured list Sunday, the Rangers aren't sure it makes sense for him to return if his surgically repaired right wrist isn't strong enough for him to bat with the extreme torque generated by his powerful swing. Woodward said the Rangers might have begun his rehab process at too quick a rate and spoke with Gallo about the situation. "He's had too much progress this year to come back and play a couple games," Woodward said. ... Texas selected the contract of C Tim Federowicz from Triple-A Nashville.

Athletics: It's unclear whether RF Stephen Piscotty will be healthy from a sprained right ankle in time to play the rest of the season given he has been out since Aug. 25 and won't have a chance to get rehab at-bats. He also missed extended time with a sprained right knee from June 30-Aug. 2. "It's going to go down to the wire, I think," manager Bob Melvin said. "He still has some challenges. There are certain days that he feels good and the next day maybe not as much. We're up against it here with nine left. It's going to be a challenge to do it but he's going to continue to work and try to be part of it toward the end." ... RHP reliever Lou Trivino slipped away from the field and fell on his ribs and oblique. He hasn't pitched since Sept. 14 but played catch Friday. "Lou feels a lot better," Melvin said.

LHP Sean Manaea (2-0, 0.50 ERA) makes his fourth start of the season for the A's after returning Sept. 1 from a yearlong absence following shoulder surgery. He has allowed one or fewer runs in his first three outings. Texas counters with LHP Brock Burke (0-1, 5.19) in his sixth career start, still seeking his first victory.