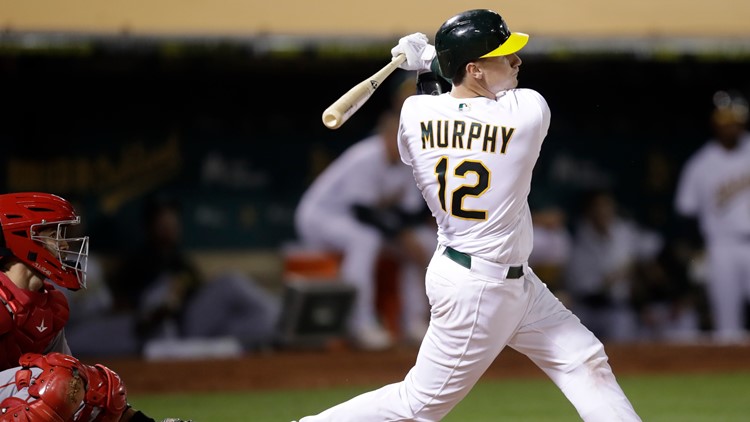 Murphy drove an 0-1 pitch from Jake Jewell over the right center wall in the fifth inning and replays showed his proud parents cheering and celebrating in the stands.

Jurickson Profar also went deep as the A's slugged away to give Tanner Roark (9-8) plenty of support - not to mention sparkling defense.

Roark pitched 6 2/3 innings, his third scoreless outing of the season. He didn't allow a run over six innings May 9 at the Coliseum against the A's while with Cincinnati.

The right-hander gave up five hits, struck out six and walked two in his sixth start for the A's since being acquired from the Reds at the trade deadline. Yusmeiro Petit, Joakim Soria and Liam Hendriks finished a five-hitter that took just 2 hours, 31 minutes.

The 24-year-old Murphy, a third-round draft pick by the A's out of Wright State in 2016, went 1 for 3 with a strikeout and was called for catcher's interference in the third, allowing Shohei Ohtani to reach and load the bases.

Profar connected for his 19th home run with an opposite-field drive in the second off lefty Patrick Sandoval (0-2), who worked just 3 1/3 innings because the Angels want to be careful with the rookie prospect. Sandoval allowed one run on one hit, struck out three and walked one while facing the A's for the first time in his career. He was coming off five scoreless innings with a career-best nine strikeouts his last time out in a no-decision against Texas.

The Angels dropped to 3-15 in their last 18 games and have lost the season series to the A's for the first time since 2013.

As a starter, Ohtani batted in a spot other than third in the order for the first time all season. He was moved down to fifth.

The two-way star, who snapped an 0-for-14 funk with a double Tuesday, struck out three times as the A's hosted Japanese Heritage Night.

A's left-hander A.J. Puk hasn't pitched in more than a week, and manager Bob Melvin is working to find the right spot for the 24-year-old prospect. Puk's first two major league appearances came in the eighth inning of tight games against the Yankees and Giants. Puk was charged with a blown save against the Giants, then steadied himself with two scoreless innings in a 19-4 win over Kansas City on Aug. 26.

"We probably threw quite a bit at him early on," Melvin said. "I talked to him a little bit about it today. We'll get him in the right spot and we'll get him rolling."

Angels: Manager Brad Ausmus hinted that All-Star INF Tommy La Stella, recovering from a broken right leg, might not be ready to rejoin the Angels in Chicago this weekend as hoped. La Stella hasn't progressed in what he is able to do rehabbing. "He still at times feels discomfort in the leg with certain movements," Ausmus said.

Athletics: RHP Chris Bassitt is expected to rejoin the team Thursday after he and his wife welcomed the birth of their first child, a daughter named Landry Jayne, on Wednesday. Bassitt will come off the paternity list and is scheduled to start Saturday against Detroit, two days later than his regular turn in the rotation.

Angels: LHP Jose Suarez (2-5, 6.71 ERA) faces Oakland for the first time in his career and looking for his first victory in 11 starts - the longest winless stretch by an Angels pitcher this year - since June 15 at Tampa Bay.