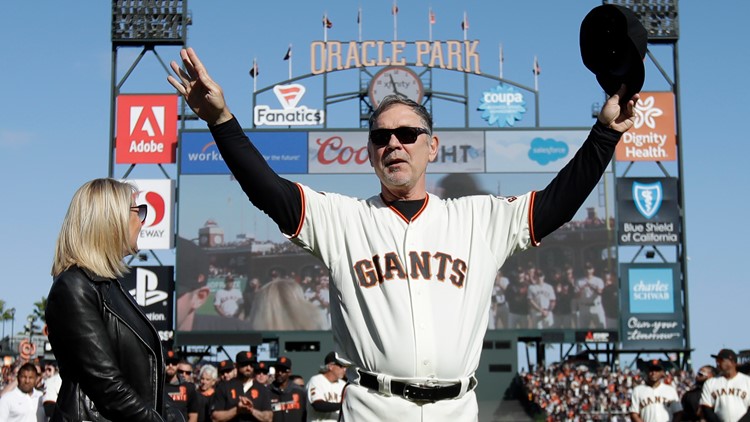 Photo by: AP
San Francisco Giants manager Bruce Bochy, center, gestures toward fans next to his wife Kim during a ceremony honoring Bochy after a baseball game between the Giants and the Los Angeles Dodgers in San Francisco, Sunday, Sept. 29, 2019. (AP Photo/Jeff Chiu, Pool)

SAN FRANCISCO (AP) - Bruce Bochy bid an emotional farewell following 2 1/2 decades in what is certainly Hall of Fame managerial career, finishing with a 9-0 defeat to the mighty Dodgers on his last day Sunday.

Los Angeles won its franchise-record 106th game, jumping to a 5-0 lead in the first that held up on Will Smith's two-run homer right after a bases-clearing, three-run double by Corey Seager.

"It's all about Bochy," Dodgers manager Dave Roberts said before the game, then paid his respects during a special exchange of the lineups before first pitch.

Yet Roberts absolutely wanted to win this one to put these 2019 Dodgers (106-56) in elite company of their own. They passed the win mark of the 1953 "Boys of Summer" team based in Brooklyn that included Jackie Robinson, Duke Snider and other Hall of Famers.

Chants of "Bochy! Bochy!" greeted him during introductions and son and former Giants pitcher Brett threw out the ceremonial first pitch to his ex-catcher father. Bochy held his grandson in the dugout before the game, too. Fans stood and cheered "Bochy!" again once the final out was made and a postgame ceremony ensued.

The 64-year-old Bochy, who guided the Giants to World Series championships in 2010, '12 and '14, waved and tipped his cap from the dugout before the game before doing some stretches against the back of the railing taking it all in as he promised to do from the start of the final week.

Lefty Rich Hill worked three scoreless innings allowing one hit in his 13th start of the season for the Dodgers. Dustin May (2-3) pitched a perfect fourth for the win.

A smiling Tim Lincecum was among the former players on hand for Bochy's farewell festivities. Lincecum, a two-time NL Cy Young Award winner with a pair of no-hitters, didn't want to immediately reflect on Bochy.

The Giants attempted to make the loudest foghorn call the Bay Area has experienced by having fans turn their phones into a foghorn through the ballpark app or on the team's website.

Clayton Kershaw pitched the bottom of the fifth in a playoff tuneup, getting one strikeout in a 1-2-3 inning. He pitched in relief for the first time since Sept. 22, 2009.

Kershaw tipped his cap to Bochy, and the manager did so back.

Bochy promised MadBum would have his spikes on.

Madison Bumgarner, who didn't pitch Sunday as had been originally planned, drew a rousing standing ovation before lining out as a pinch-hitter with two outs in the fifth against Kershaw.

San Francisco's big lefty tipped and waved his batting helmet in every direction to acknowledge the fans in what might have been his final moment in a Giants uniform.

The 2014 World Series MVP can become a free agent, so Tuesday might have been his final start for the Giants. He is wrapping up a contract singed in April 2012 that included a $12 million contract option this year, and the Giants opted not to deal him at the trade deadline.

Dodgers: RHP Joe Kelly, who hadn't pitched since Sept. 18 because of what the Dodgers called an overall body issue, recorded two outs in the sixth. ... LF A.J. Pollock returned to the lineup after sitting out Saturday with a left knee bruise he injured when hit by a pitch during Friday's 9-2 win. ... 3B Justin Turner missed his fifth straight game with back tightness but will get simulated work done during Tuesday's workout day back home ahead of the Division Series.