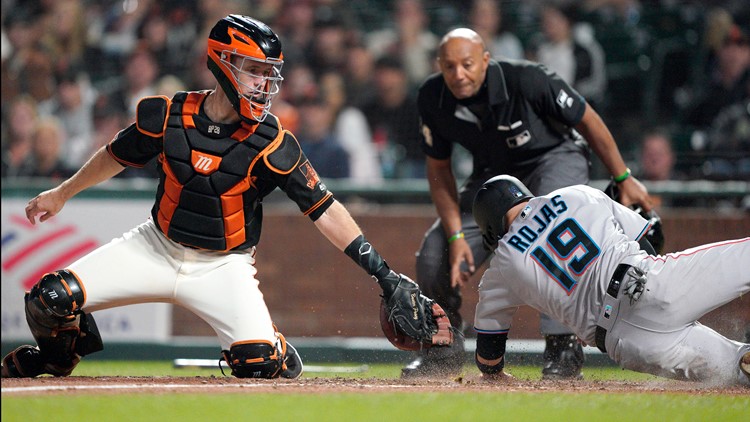 SAN FRANCISCO (AP) - Jorge Alfaro got some timely advice from a teammate, and he put it to good use.

Alfaro hit a massive home run off Madison Bumgarner, Miguel Rojas doubled in the go-ahead run in the top of the eighth inning, and rookie Robert Dugger pitched 6 1/3 solid innings as the Miami Marlins beat the San Francisco Giants 4-2 on Saturday night.

Rojas, who played for the Los Angeles Dodgers in 2014 and is familiar with the challenging hitting conditions in San Francisco's waterfront ballpark, advised the Marlins slugging catcher to "just swing under the ball."

Alfaro's squared up an 0-1 curveball below the strike zone that traveled an estimated 473 feet according to Statcast, snapping a scoreless tie with one out in the seventh.

"He clipped it and the ball went really far," Rojas said. "It was one of the farthest balls I've ever seen hit in this ballpark."

Alfaro said he guessed wrong on the pitch.

"I was looking for a fastball and I just saw it out of his hand," Alfaro said. "I waited for it and tried to hit it hard and put the ball in play and round the bases."

"That's a pretty good spot I threw it at," Bumgarner said. "The spot where I threw it, I get a lot of swings and misses and ground balls. Unfortunately, just not in this case."

"When he hits them they go," Mattingly said.

Rojas broke a 2-2 tie with a run-scoring double to left off Giants reliever Shaun Anderson (3-5). Lewis Brinson singled in Rojas to make it 4-2.

"I was aggressive," Rojas said. "I was trying to do damage instead of just putting the bat on the ball, and I hit it hard."

Jarlin Garcia (3-1) retired the only batter he faced for the win as the Marlins snapped a five-game skid.

Garcia got Brandon Belt to fly out to left with Donovan Solano representing the go-ahead run at third with two outs in the seventh.

Anderson gave up two runs on three hits in 1/3 of an inning.

Alfaro's 15th homer ended a streak of 20 consecutive innings in which Miami was held scoreless going back to the fifth inning of Thursday's 3-2 loss to Milwaukee.

The Giants tied it in the seventh on Solano's pinch-hit, two-run triple to right off reliever Brian Moran.

José Ureña pitched around two singles in the ninth for his second save in three tries.

Kevin Pillar made a leaping backhanded catch near the top of center field wall, robbing Martin Prado of extra bases with one out in the fifth for a 407-foot out according to Statcast.

The catch earned Pillar a salute from Prado before he turned back to the Marlins' dugout.

The Sacramento River Cats, San Francisco's Triple-A affiliate, completed a three-game sweep of the Round Rock Express with a 7-5 victory on Friday to win organization's first the Pacific Coast League championship since 1977.

Marlins: OF Garrett Cooper (left knee contusion) was examined on Saturday and will not need further tests, manager Don Mattingly said. Cooper suffered the injury making a sliding catch during Friday night's game. His status remains day-to-day. . LHP Josh Smith was claimed off waivers from the Cleveland Indians. He will join the team in Arizona on Monday. . INF/OF JT Riddle was transferred to the 60-day injured list.

Giants: LHP Will Smith (back tightness) threw a light bullpen before Saturday's game and reported no discomfort, manager Bruce Bochy said. Bochy said he'd wait see if any tightness developed before determining whether the All-Star closer was available to pitch Saturday. . OF Alex Dickerson (right oblique) took swings in the batting cage on and on the field and caught fly balls. . OF Mike Gerber was recalled from Triple-A Sacramento and IF Cristhian Adames was selected from Sacramento. . INF Corban Joseph was designated for assignment.

Giants: RHP Johnny Cueto (1-0, 0.00) will make his second start since coming off Tommy John surgery. The two-time All-Star pitched five shutout innings of one-hit ball in his 2019 debut against Pittsburgh on Sept. 10.