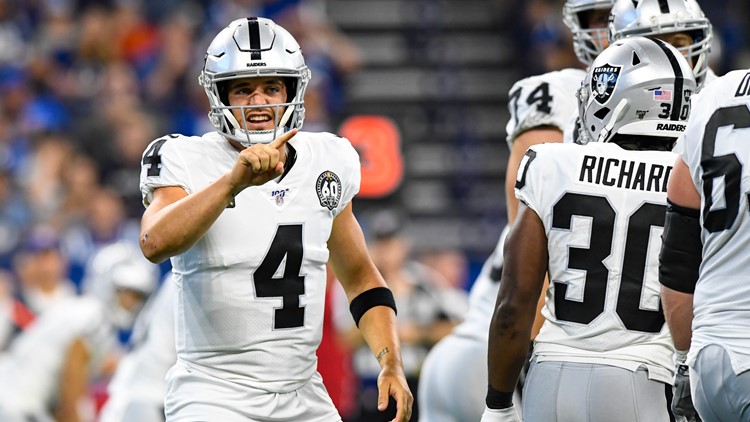 Photo by: AP
Oakland Raiders quarterback Derek Carr (4) during the first half of an NFL football game against the Indianapolis Colts in Indianapolis, Sunday, Sept. 29, 2019. (AP Photo/Doug McSchooler)

INDIANAPOLIS (AP) - Derek Carr led the Oakland Raiders to touchdowns on three of their first four possessions Sunday, and Erik Harris returned a late interception 30 yards for a score to seal a 31-24 victory at Indianapolis.

Oakland (2-2) snapped a two-game losing streak and won in Indy for the first time since 2001.

With starting receivers T.Y. Hilton and Devin Funchess out with injuries, the Colts (2-2) gained 346 yards - most coming in the final quarter when they were scrambling to get back in the game. The inability to sustain drives took a toll on Indy's defense.

He threw an 18-yard TD pass to Foster Moreau on the game's opening drive. On the Raiders' next offensive play, Trevor Davis took the pitch on a jet sweep around the left side and sprinted 60 yards for a touchdown to make it 14-0 less than seven minutes into the game.

Justin Houston's fumble recovery on the Raiders' next possession set up a 5-yard TD pass from Jacoby Brissett to Jack Doyle.

Carr answered with a 19-yard TD pass to Tyrell Williams in a stark contrast to the team that stated the game with only two scores on the last 18 possessions.

The Raiders' defense made sure it held up, though Brissett's 4-yard pass to Chester Rogers with 5:27 left cut the deficit to 24-17. After Oakland forced a punt, Harris jumped Zach Pascal's route, came up with the interception and jogged into the end zone.

Brissett threw a 48-yard TD pass to Eric Ebron with 1:10 to play, but the Colts didn't get the ball back.

Brissett finished 24 of 46 with 265 yards, three TDs and one interception. Pascal had four receptions for 72 yards.

Burfict was called for unnecessary roughness on a helmet-to-helmet collision with tight end Doyle, who had made a 5-yard catch on third-and-4. He jogged to the tunnel even before referee Scott Novak announced the disqualification to the crowd.

It's not the first time Burfict has run afoul of league rules. He had 11 fines and suspensions in seven seasons with Cincinnati before joining the Raiders.

Raiders: Khalil Mack plays his former team, the Raiders, as the star linebacker and the Bears play Oakland in London - a home game for the Raiders.