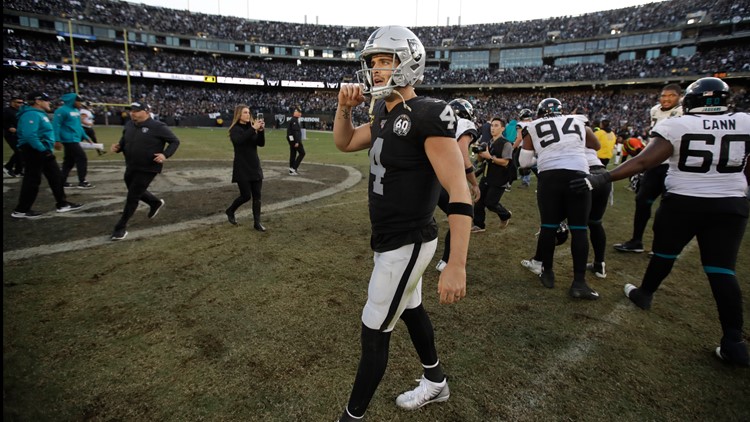 Photo by: AP
Oakland Raiders quarterback Derek Carr walks off the field at the end of an NFL football game against the Jacksonville Jaguars in Oakland, Calif., Sunday, Dec. 15, 2019. Jacksonville won the game 20-16. (AP Photo/Ben Margot)

OAKLAND, Calif. (AP) - Derek Carr's last-second desperation heave fell to the turf in the end zone and the fans at the Oakland Coliseum went silent.

The final scheduled NFL game ever in Oakland ended with a fourth-quarter collapse by the Raiders instead of a celebration for one last win before the franchise heads to Las Vegas.

The Raiders blew a 16-3 halftime lead and lost 20-16 to the Jacksonville Jaguars.

-  Raiders fans, for their loyalty over years, especially the past two seasons after the team announced that they would relocate to Las Vegas.

After losing their fourth straight game on Sunday, the Raiders (6-8) still sit in second place in the AFC West, and mathematically have not been eliminated from the playoff picture.

They will visit the Chargers (5-9) in Los Angeles on Sunday.

The Raiders called the Oakland Coliseum home from 1966 to 1981 before moving to Los Angeles. The team moved back to the East Bay in 1995.

Many former Raiders were on hand to see the finale in Oakland, including Hall of Famers Marcus Allen and Fred Biletnikoff, as well as Charles Woodson, who lit the Al Davis torch before the game.