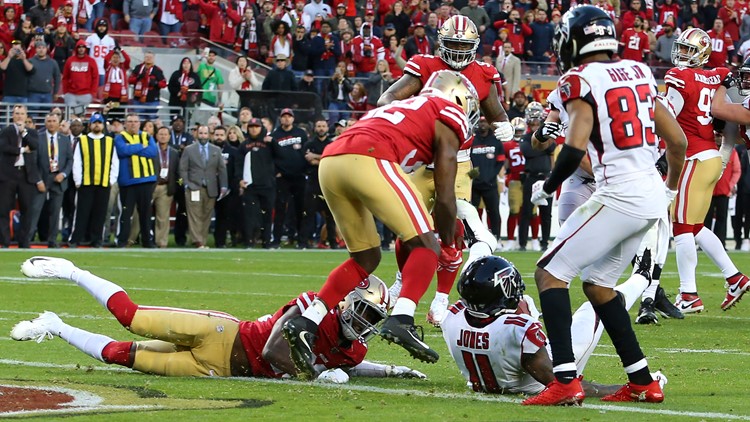 Photo by: AP
Atlanta Falcons wide receiver Julio Jones (11) sits next to the goal line after scoring against the San Francisco 49ers during the second half of an NFL football game in Santa Clara, Calif., Sunday, Dec. 15, 2019. (AP Photo/John Hefti)

SANTA CLARA, Calif. (AP) - Matt Ryan teamed up with Julio Jones on a 5-yard pass that was ruled a touchdown after a replay reversal with 2 seconds left, sending the Atlanta Falcons past the playoff-bound San Francisco 49ers 29-22.

Jones was called short of the goal line with the Falcons trailing 22-17. But a replay showed the ball breaking the plane with the Jones in the air while being tackled by Jimmie Ward.

The 49ers still clinched their first playoff berth since 2013 with the Rams' loss at Dallas.

With the loss, the 49ers still clinch a playoff spot, but fall to the fifth seed in the NFC, despite being tied with the Seattle Seahawks atop the NFC West standings, with an overall record of 11-3.

The 49ers will host the Los Angeles Rams (8-6) on Saturday night at Levi's Stadium. Los Angeles lost to the Cowboys in Dallas 44-21 on Sunday afternoon.