To get him there, the Blues and their fans went on an all-out campaign to do so—from Twitter to Instagram, to Facebook and a billboard on the interstate 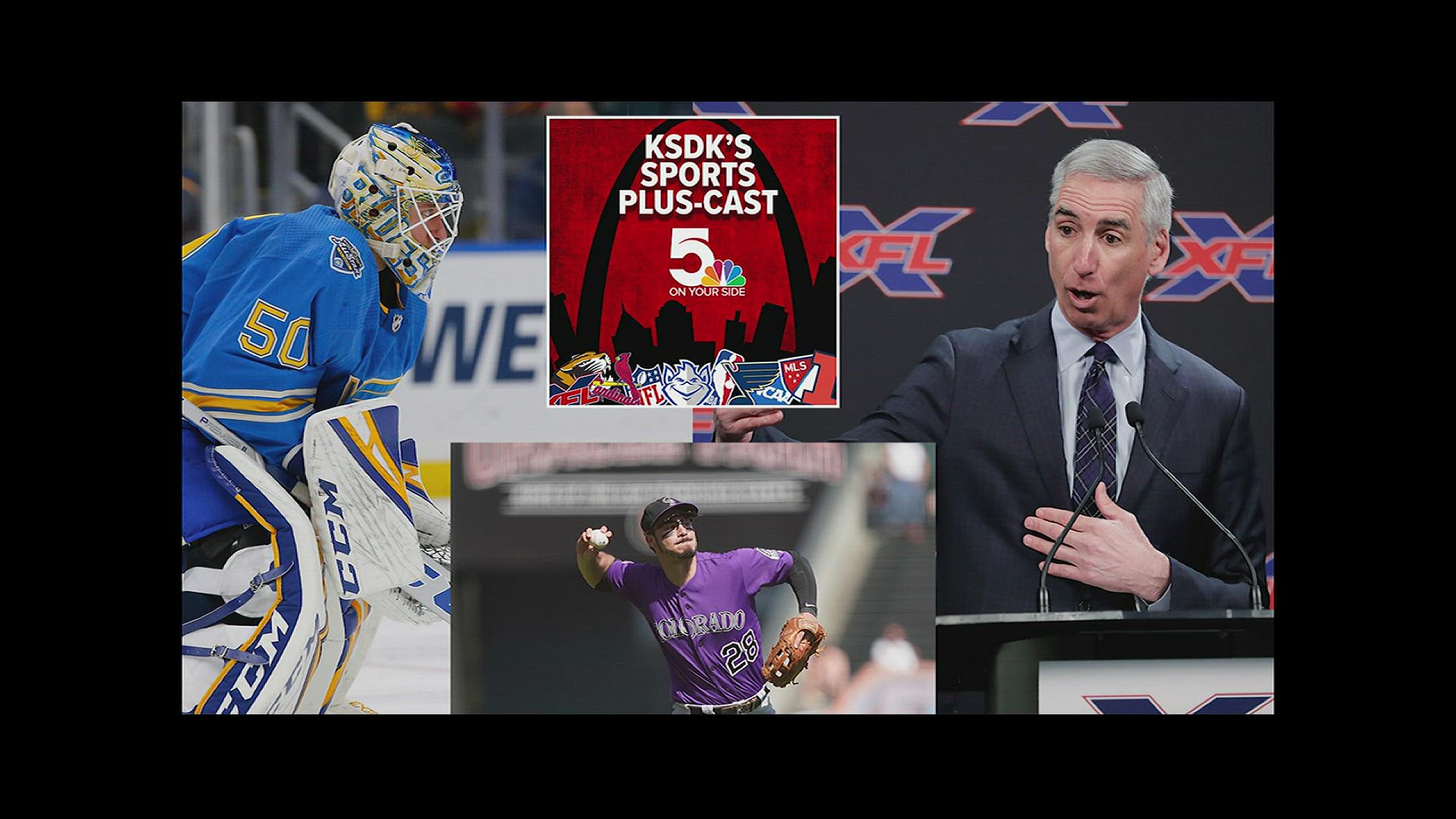 ST. LOUIS — David Perron was not going to shower the media with all sorts of emotion. It's not his style.

But it was quite evident the appreciation the Blues' right wing had after a 5-2 win against the New York Rangers on Saturday night.

That appreciation couldn't have been hidden on the inside. Perron could have peeled off a Superman shirt to unveil just how he felt.

When it was announced late Saturday afternoon that Perron had won the 'Last Men In' vote and thus earned a spot on the Central Division All-Star team, it was a spot not only ell-earned, but well-deserved. He'll join teammates Alex Pietrangelo, Ryan O'Reilly and Jordan Binnington along with coach Craig Berube at the game in St. Louis.

"It’s really exciting," Perron said after scoring his 20th goal of the season. "Thanks to all the people obviously in St. Louis that helped me get here, and also probably other cities, but I’m sure most of the votes came from here in town, and the team helped me out, too. They reached I’m sure to different platforms. The Cards helped me out. So, it’s really cool."

RELATED: No debate necessary: Perron should be an all-star

When the initial teams were announced on Dec. 30, the media, including this one, felt that Perron was a slam dunk, a shoe-in to be among the Blues' selections. But with each division only allotted 11 spots and each team needing to be represented, one had to wonder, even though the Blues are hosting All-Star Weekend Jan. 24-25, how many they would actually get?

Would it be one? Two? Three players? It couldn't be four, right?

Well, when the announcement was made and Perron was not on it, maybe it wasn't a surprise outside the city boundaries, but here, it certainly was.

Pietrangelo, O'Reilly and Binnington all were named, but the Blues' leading scorer was not.

"I thought up front, you obviously look at the numbers alone, for sure I thought he should have been there instead of myself, absolutely, for what he's been doing," O'Reilly even conceded.

"I was disappointed definitely when it came out. I wasn’t there, but right now, with the wait and obviously knowing which guys are going, Chief is going, our trainers will be here, I wouldn’t want it any other way at the end," Perron said. "It’s going to be really fun to bring my family and the kids, and we’re really going to enjoy that part."

LISTEN: Sports Plus Podcast: Blues kick off 2020 as best in the west, we like the XFL rules and what would we give up for Arenado

To put it mildly, Blues fans were enraged.

"I saw some of those tweets," Perron said. "I was getting a lot of them. So yeah, I think that the fans really liked it, and they wanted to help me out, and I really thank them for that, because, again, you don’t know if you’re going to get many opportunities. For me, like, growing up, you always watched the All-Star Game as a kid, as a hockey fan. You try and see the best players play each other. We all know that the intensity is not the same thing, but it’s still pretty cool to be named there one time. Like, we see there are other guys that are named every year. I’m sure they’re getting old to be named there, but for me, it’s quite the opposite. It’s really exciting."

To get him there, the Blues and their fans went on an all-out campaign to do so—from Twitter to Instagram, to Facebook and a billboard on the interstate. Even Cardinals pitcher Adam Wainwright pitched in on his Twitter account. Blues fans flocking to the league website to cast their votes, up to 10 per day from Jan. 1-10, it was a full-court press to get @DP_57 to the finish line.

"It’s nice," Perron said. "It almost seemed like the Instagram was all about David Perron and not the Blues anymore. So, I’m glad it’s kind of over that way. But it’s definitely really exciting.

"I kind of found out last night from a call from Army [Doug Armstrong]. I was hoping I wasn’t getting traded," Perron said with a smile and laugh. "But no, so, I found out and obviously kept it quiet as much as I could to respect the protocol and the way they wanted to bring it out, but I told my family and all that. So, that was cool."

RELATED: You can register to run in the St. Louis All-Star 5K

RELATED: Your guide to the 2020 NHL All-Star Game in St. Louis

Perron wakes up on a Sunday morning with 46 points (20 goals, 26 assists) in 46 games. His goals and points would establish career-highs. In light of the Blues losing Vladimir Tarasenko to a dislocated shoulder in late October, Perron has picked up much of the slack in his third tour of duty for the organization that drafted him.

"It just speaks to the support our team gets and the support David's earned," Blues defenseman Robert Bortuzzo said. "I couldn't be happier for a guy and couldn't be more deserving. Throughout his career, he's had some great seasons and for our community to step up and for everyone to step up for him, it's very well deserved and happy to see from our fan base. The guy's had an incredible season with the game-winning goals and overtime. He's been an offensive juggernaut for our squad. Thankfully, he's going."

Even Binnington asked the media earlier in the week if they had done their due diligence by voting. When he said he's voted "a couple times," he had to be reminded that he could vote up to 10 times per day.

RELATED: Looking back on a year of Jordan Binnington

"He deserves it," said Blues forward Zach Sanford, who had a goal and an assist Saturday. "He’s been great all year and I think it even started last year. He’s been huge for us and I think everybody knows that it’s been awesome to see the support from the fans and especially the guys in the room, everyone voting for him and getting him there. I don’t think any of us could be happier for him."

Perron was drafted by the Blues with the 26th pick in the first round of the 2007 NHL Draft. His path took him to Edmonton in 2013 when he was traded to the Oilers, which included the pick the Blues used to draft Ivan Barbashev. He was dealt to Pittsburgh in 2014, then to Anaheim in 2015 before resigning with the Blues in 2016.

When Perron was not protected in the Vegas expansion draft, the Golden Knights plucked him off the Blues' roster in 2017 and he went on to play in his first Stanley Cup Final, losing to the Washington Capitals.

But the marriage rekindled itself, and the Blues brought Perron back on a four-year, $16 million contract in 2018. He helped the Blues win their first Stanley Cup last summer, and now he's a first-time All-Star in his second hometown.

The storybook couldn't have been written any better.

"It is incredible," Perron said. "Over the years, nine years out of 13 so far here, and hopefully many more. I don’t know. They’ve given me a big opportunity to play in the league. They invest a lot of time, and then so did I. So, it’s awesome. It’s something that obviously one time you hope that you can go in your life, and I don’t know if I’ll ever have a season that I can get the opportunity again, so it’s really cool."