One of the strongest storms of the 2020 Atlantic hurricane season had a unique feature that was only seen by a select few people on Wednesday. 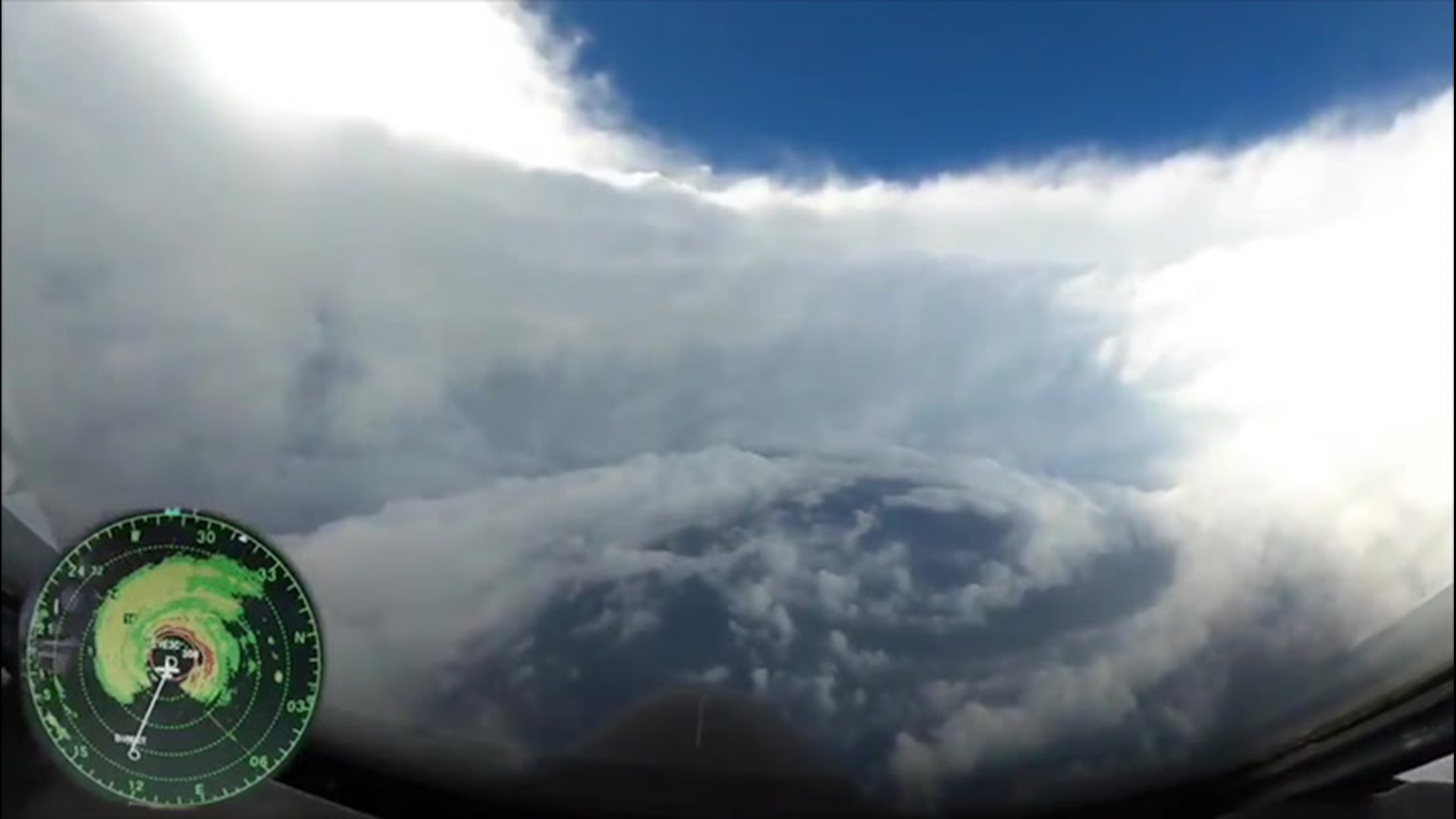 One of the strongest storms of the 2020 Atlantic hurricane season had a unique feature that was only seen by a select few people on Wednesday as Hurricane Epsilon churned over the Atlantic Ocean.

The Hurricane Hunters flew directly through the center of the storm on Wednesday around the time that Epsilon reached peak intensity. The propeller plane broke through the turbulent eyewall, the strongest part of a hurricane, to reveal an incredible spectacle in the tranquil eye.

As the plane punched through the clouds, the few members onboard saw the clear blue sky overhead and a unique perspective of the storm that revealed what is known as the "stadium effect."

"Wednesday's Hurricane Hunter mission into the clearly-defined eye of the storm revealed the most photogenic ‘stadium effect' I can remember seeing all year," Cornish said.

The stadium effect is when "the wall of clouds around the eye looks like a sports stadium due to rapidly-rising air moving outward, causing the eye's diameter to widen the farther up you go," NOAA said, and can only be seen from inside the eye of a very strong, well-organized hurricane.

In recent years, the Hurricane Hunters witnessed the stadium effect in Hurricane Dorian in 2019 and by people on the ground in Mexico Beach, Florida, where the eye of Hurricane Michael made landfall in October 2018.

The 26th named storm of the season took shape on Monday, which tied 2005 for the all-time record for most tropical systems in a calendar year in the Atlantic basin.

"Epsilon formed as a non-tropical mid-level storm, spun down to the surface and took on tropical characteristics," AccuWeather Senior Meteorologist Alex Sosnowski said.

Between Tuesday and Wednesday, Epsilon rapidly intensified into a Category 3 storm, the benchmark to be classified as a major hurricane. Although there have been 26 storms this year, Epsilon was just the fourth major hurricane.

Around the same time that Epsilon was upgraded to a major hurricane is when the Hurricane Hunters flew through the eye of the storm.

The hurricane has weakened since winds peaked at 115 mph late Wednesday, and it is projected to continue this weakening trend through the end of the week.

Bermuda should escape the worst of the storm, but forecasts say the storm will still produce tropical-storm-force winds and rough seas.

"Epsilon will be less than one on the AccuWeather RealImpact™ Scale for Hurricanes for Bermuda," AccuWeather Senior Meteorologist Rob Miller said.

"Should the center of Epsilon track a little closer to the islands than we currently are expecting, impacts to Bermuda would be slightly greater," Miller added.

"Epsilon will travel over progressively cooler waters and will slowly weaken into this weekend," Sosnowski said.

Although it is forecast to weaken, it may brush part of Atlantic Canada on its journey across the northern Atlantic.

"It could get close enough to bring some rain and gusty winds to Newfoundland early next week as its cloud shield and circulation spread out over the North Atlantic," Sosnowski said.

Long-range forecasts indicate that Epsilon could track toward Iceland or the British Isles around the middle of next week, although it will no longer be a hurricane as it loses tropical characteristics over the colder waters of the North Atlantic.