California's water crisis is growing. Here's how some farmers are making changes and the new ways they are learning to use water. 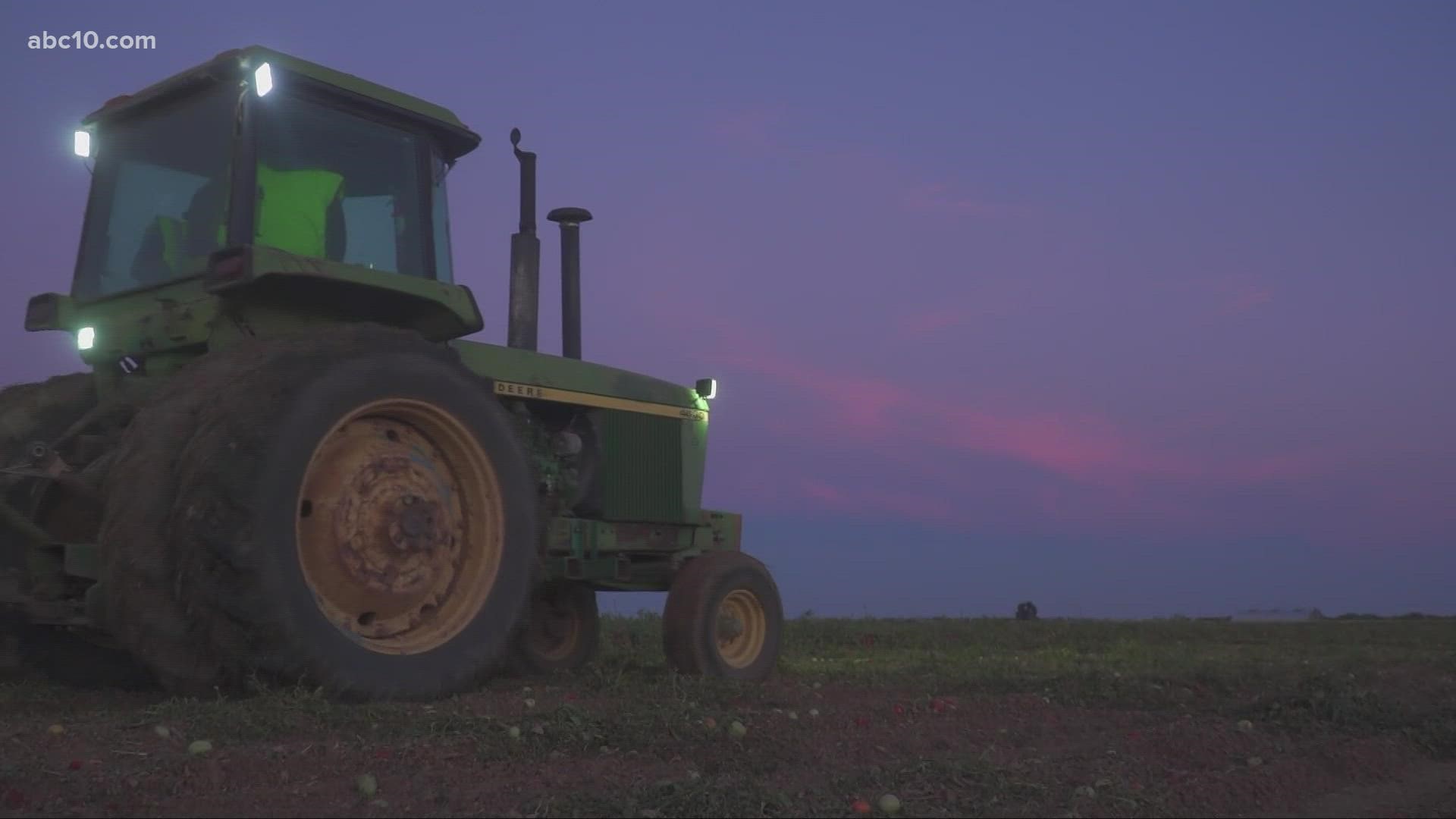 SACRAMENTO, Calif. — Drought is and always has been part of California’s climate. So, how does the state that provides the largest share of fruits and vegetables to the U.S. and parts of the world survive with less water?

Bruce Rominger is a fifth-generation farmer in Winters, part of the Sacramento Valley in Northern California. It’s the beginning of their tomato harvest, and they are already starting to think of next season as drought conditions grow.

He says California has so much valuable, productive ground, but without water, it’s virtually worthless. And if we have another dry winter, more and more farmers will be getting little to no surface water. If that’s the case, they’ll be in bad shape.

This would not just affect the state but the whole country, since over a third of our vegetables and two-thirds of our fruits and nuts are grown in California.

In fact, no other state comes close to the amount of food production.

The last cash report shows California ranches and farms taking in $50 billion for their output. Iowa comes in second with $27 billion.

California has a unique set-up. The Central Valley is like a bathtub of sediment creating highly productive land for growing. And ironically, no rain for months.

Rominger says the lack of rain is the perfect climate for growing foods during the summer months because farmers can put irrigation exactly when and where they need.

To sustain this in a drier, warmer climate, a great deal of focus is shifting to water efficiency. This is especially true in California’s dairy industry, which is the nation’s leading dairy state and a big consumer of water.

Betsy Karle is a University of California Davis dairy advisor. She says a cow producing milk needs to drink about 30 to 50 gallons of water a day. But adds California dairies are using 88% less water than 50 years ago.

Part of the reason is due to recycling. She says a drop of water on a dairy farm will get recycled and used up to four times before it leaves the dairy center and then gets used for irrigation on the farm crops.

This is exactly the kind of innovation so many farmers and researchers are trying to create and implement through the state.

Samuel Sandoval, a water resources specialist at the University of California, Davis, says 80 to 90% of the water we use, is on our plates. He tracks how much water is used in each part of the plant life cycle then develops better strategies for distribution. He says most farmers in California are doing a good job conserving, but there are still some overusing.

Sandoval shared an analogy comparing water use to using a credit card. Imagine you are running your credit card and you have accumulated a huge debt but the bank has not been coming to collect. In some areas, we’ve been using that credit card for 100 years leading to big water deficits.

By working with farmers, Sandoval sees a bright future as more are finding innovative ways to conserve water and natural solutions.

At Rominger’s farm on the edge of the California coastal range, he's letting the wild be "wild."

In an effort to reduce the overall water demand, his family put part of their property rangeland into a conservation easement. This will keep wildlife in the hills and prevent planting permanent crops.

All of this, he says, is part of a long-term plan since across history many strong agricultural societies lasted 70 generations. His family has been farming on their land for five generations and now wonders if they will be to sustain this in a drier, warmer world.