DFW weather: When will your power come back on?

Widespread outages were reported across the metroplex. 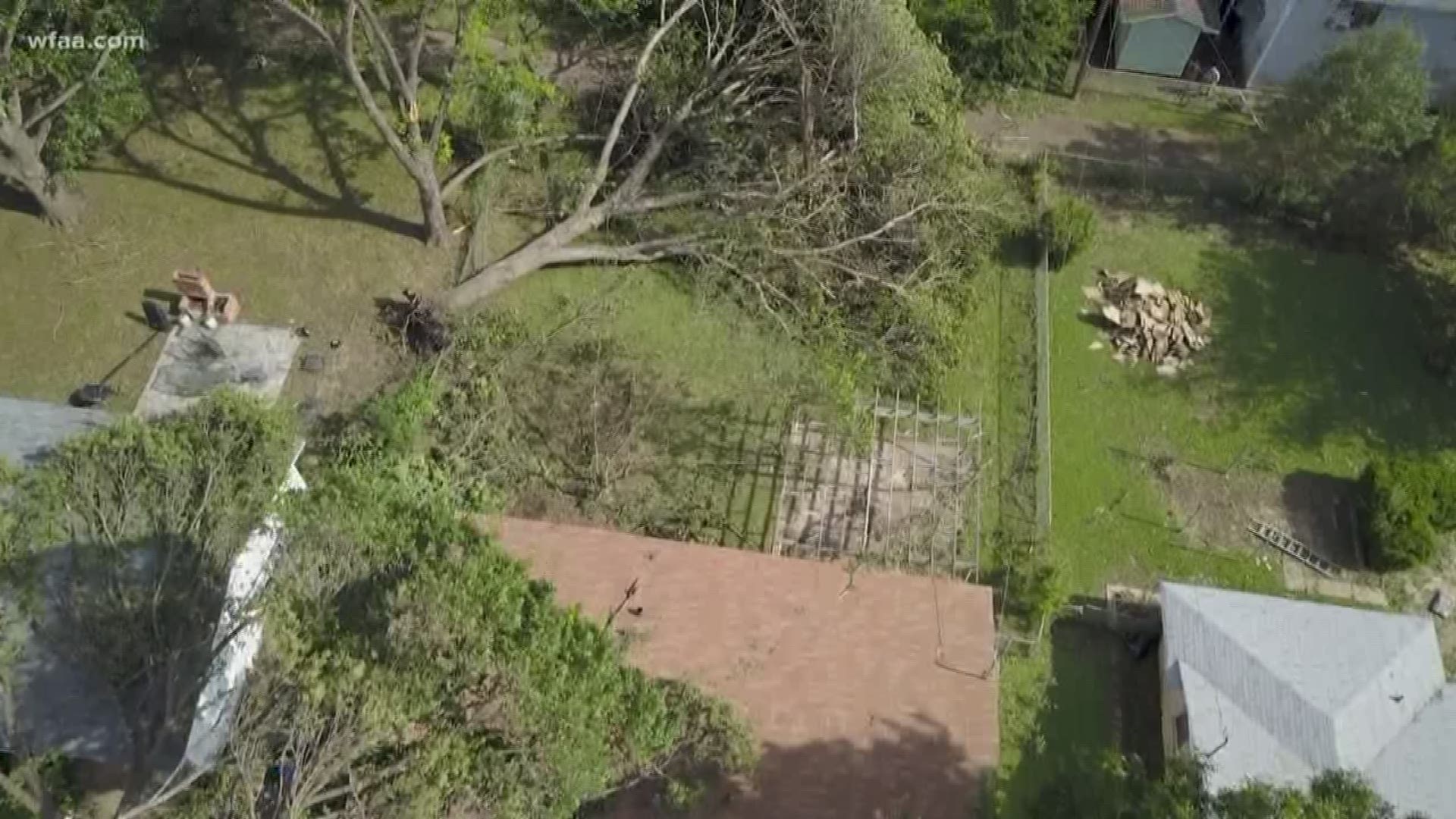 DALLAS — Updated at 10:50 a.m. Wednesday with updated power outages numbers and a statement from Oncor.

Oncor is dealing with the aftermath of storms Sunday as more than 6,600 power outages, affecting a peak of 350,000 people, were reported Monday morning across North Texas.

"While crews continue to restore power, their efforts have been hindered by fallen trees and other debris which has caused poor driving conditions," a spokesperson for Oncor said in a statement. "In these heavily damaged areas, wide swaths of power lines and distribution equipment are not only being repaired but must also be reconstructed."

Oncor estimates that most people affected will have power by late Wednesday, but some may not see restored power until Thursday.

Most of the outages are in Dallas, which was hard hit with 70 mph winds Sunday.

According to the latest numbers at 10:50 a.m. Wednesday, the number of residents affected by outages in those counties is as follows:

CHECK YOUR LOCATION FOR OUTAGES HERE

Drivers are asked to be cautious at intersections and treat flashing red lights or intersections with inoperable traffic signals as four-way stops.

RELATED: About 40% of traffic lights in Dallas affected by Sunday's storms

Read the previous report below from Sunday: 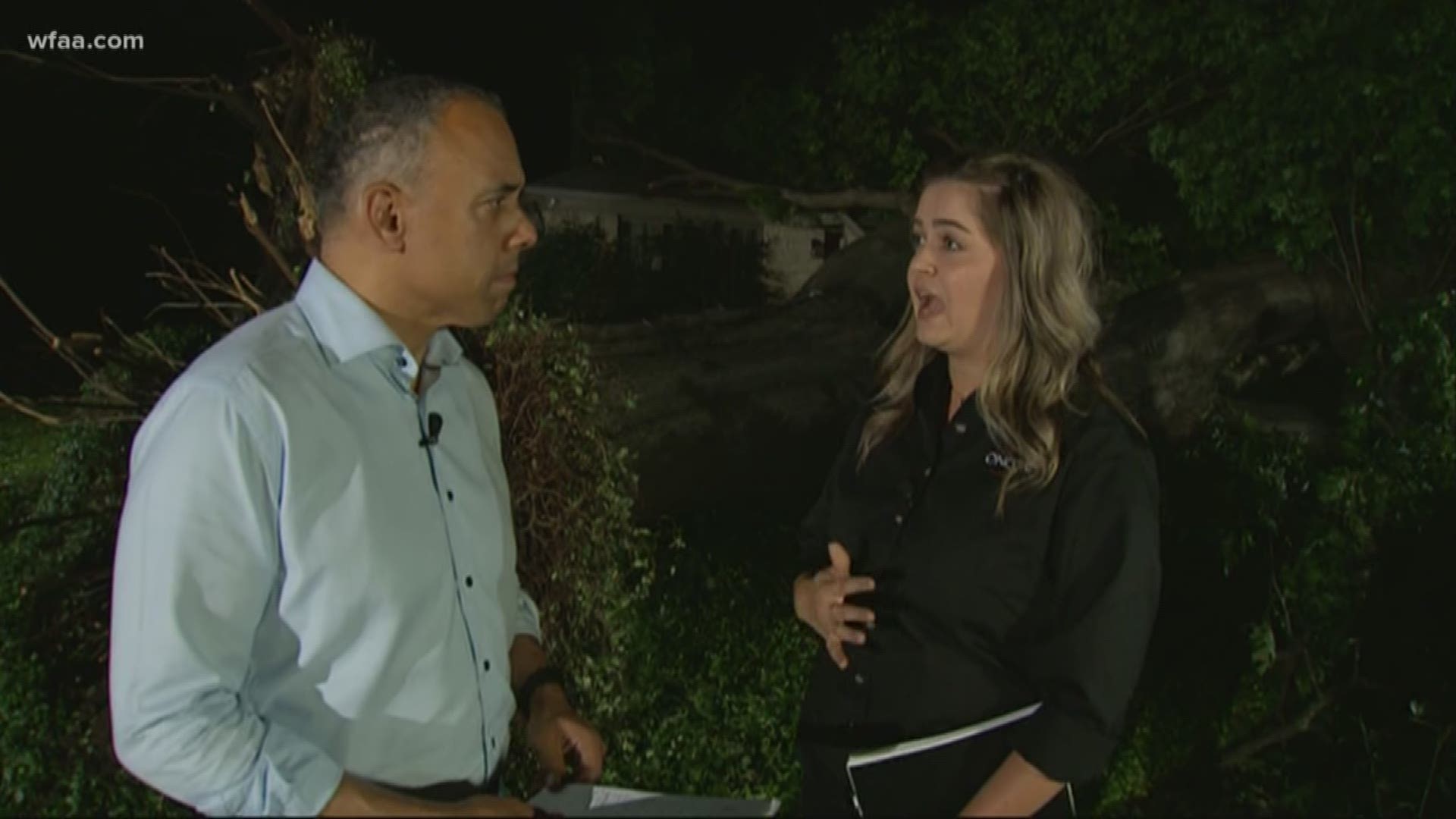 If you can read this, you may want to start stockpiling your battery packs: Oncor is reporting more than 300,000 power outages across Tarrant, Dallas, Collin and Denton counties following today's storms.

According to the latest numbers at 8 p.m., the number of outages in those counties are as follows:

CHECK YOUR LOCATION FOR OUTAGES HERE

If you need to charge phones or need to go somewhere with air conditioning, the Dallas Police Department tweeted out the following list of libraries that are still open:

They are NOT shelter areas.

"The Latino Cultural Center has been activated as a respite center for residents without power or in need, and the City of Dallas Office of Emergency Management has also activated a command center at the Latino Cultural Center. OEM is coordinating efforts with Dallas Fire Rescue, Dallas Police Department, and the Red Cross as well as the property management of the collapsed building in the Live Oak area," the City of Dallas also said in a statement.

Oncor released a statement late Sunday about the outages.

"Oncor crews have been deployed to assess damage and restore power outages across the Dallas-Fort Worth Metroplex following a line of severe thunderstorms this afternoon. As of 5:30 p.m., more than 300,000 homes and businesses are without power.

Oncor restoration crews were deployed as soon as it was safe for them to begin the damage assessment and restoration process, and they will be working around the clock until power is fully restored. In areas with heavy debris, Oncor vegetation management personnel must remove tree limbs and branches from lines before repairs can be made. Customers should be prepared for the possibility of extended outages in the case of extremely damaged equipment.

'The severity and high winds of this storm has caused significant damage and high power outages. Our crews are on the ground now and will be working around the clock to assess damage and restore power as quickly and safely as possible,' said Keith Hull, Oncor Vice President of Distribution Operations. 'The safety of our customers and crews is our top priority and we ask that everyone please remain vigilant and patient as restoration work continues.'

Keep these safety tips in mind during and immediately following severe storms:

•         If you see a downed power line, leave the area and call 9-1-1. In addition to the downed line potentially being electrified, anything touching the power line, such as a tree branch, could also be electrified. Keep pets, children and others away from the area.

•         Do not attempt to remove debris and tree limbs from areas near power lines. The debris may be concealing a live wire or downed power line.

•         Use caution when traveling on the roadways, especially in areas with heavy debris and streetlights without power.

Download our free WFAA app to stay up-to-date on all news stories in the Dallas-Fort Worth area, including weather.

And Oncor is reporting that several areas won't return to full power as late as Monday at 11:30 p.m., with parts of Tarrant County not returning to full power until the early hours of June 13.

Some ZIP codes could see power return as soon as 5:30 p.m. today, but it's unknown when power could return in several of Oncor's coverage areas. And if you live in the 76106 ZIP code in Tarrant County, you might not get power until June 13 at 2:30 a.m.