Temperatures will soar in the San Joaquin and Sacramento valleys by Thursday. 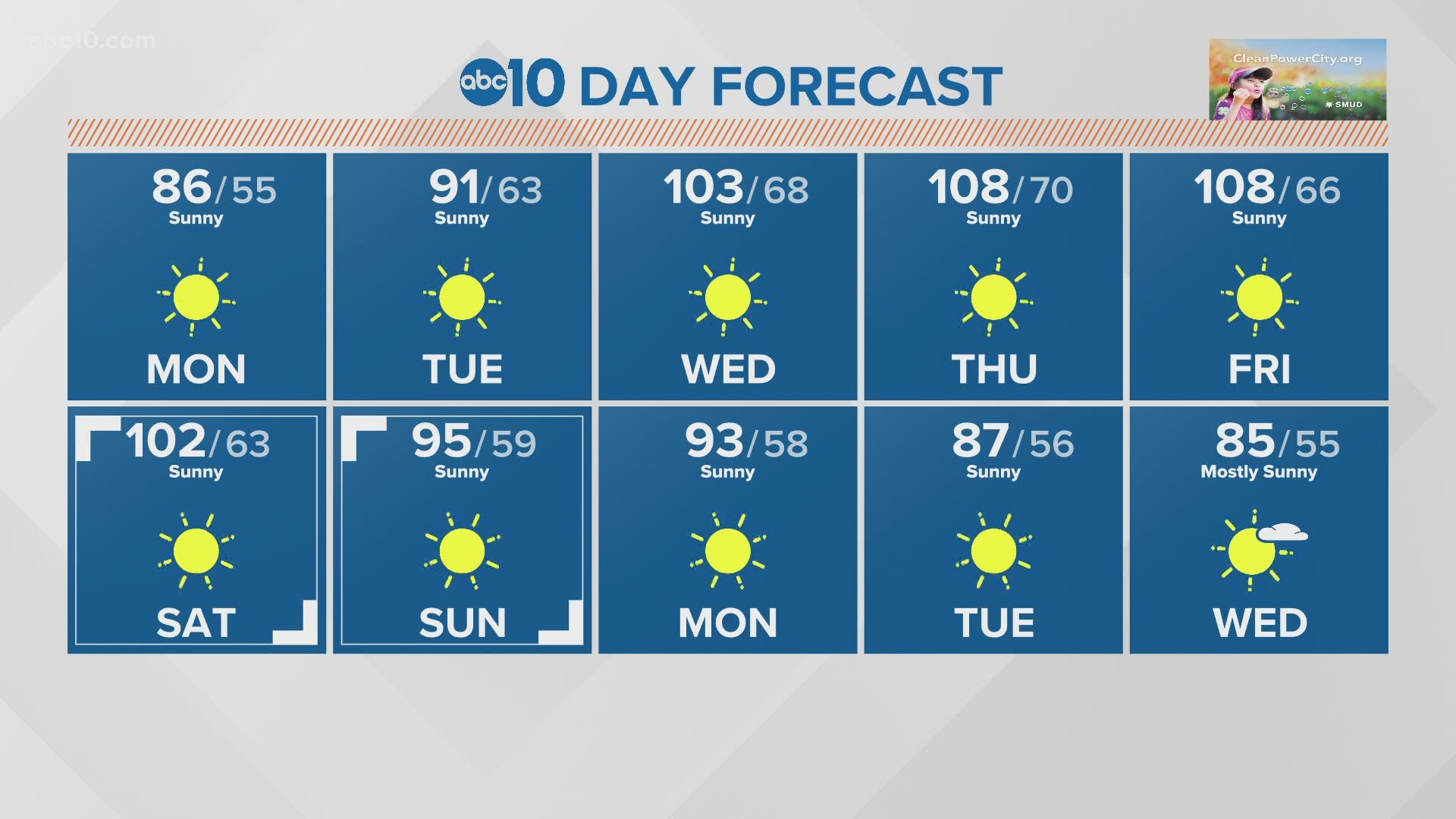 SACRAMENTO, Calif. — Much of California faces an early season heat wave this week as high pressure over the Southwest expands westward.

Temperatures will soar in the San Joaquin and Sacramento valleys by Thursday. Interior valleys and mountains of the east and north San Francisco Bay region will also see rising temperatures but onshore flow near the coast should limit heat risks there.

The National Weather Service (NWS) has already issued an Excessive Heat Watch starting at noon Thursday, June 17 and lasting until 9 p.m. Saturday, June 19. According to a tweet from the NWS Sacramento, highs are supposed to range from 100 degrees to 113 degrees in the Sacramento Valley, Sierra Foothills and the Delta on those days. Lows are supposed to be in the upper 60s to low 80s.

RELATED: These dog breeds are most susceptible to heatstroke

Dangerously hot temperatures will impact many communities throughout NorCal later this week. 🥵🌡️

Here are the latest forecast highs for various cities in the region.

Significant heat is expected to be in full effect in Southern California on Tuesday, excluding some coastal areas. Red flag warnings will be in effect Monday evening through Wednesday morning along the south Santa Barbara County coast and critical fire weather conditions are also expected in southeastern California.

The NWS is asking people to take precautions during those days to avoid heat-related issues.

Precaution to take from the NWS:

PG&E spokesperson Megan McFarland said that they want their customers to be prepared in case of outages, but they do not expect any planned Public Safety Power Shutoffs (PSPS) from them.

"Any outages that occur during this hot spell are not PSPS events," McFarland said. "One thing we see during hot weather is transformer failure and that's one of the top causes of heat-related outages."

McFarland said that because it is less likely to cool down enough at night during this upcoming extreme heat watch for the transformers to cool down, they could fail because they won't get that nightly cool down.

She said that for customers to be prepared for the potential outages, they can have flashlights and batteries ready and make sure cell phones are charged. She also recommends to try to conserve energy during this heat wave.

The California Independent System Operator (CAISO) sent out a press release earlier this week, saying that they are monitoring the extreme heat expected across the state this week. They said that they will not know if a Flex Alert is needed until later in the week.

"It is still too early to know the precise impact that next week’s high temperatures will have on the electric grid," CAISO said in the press release. "But the ISO is closely monitoring conditions and the anticipated increase in demand for electricity and will issue additional public notifications as warranted."

A real estate photographer captured firefighters arriving at a home threatened by a nearby vegetation fire.