How vulnerable is California to tsunamis? | Earthquake Ready or Not

The last tsunami to hit California came from Japan, 5,000 miles across the ocean, and was caused by a 9.0 magnitude earthquake. 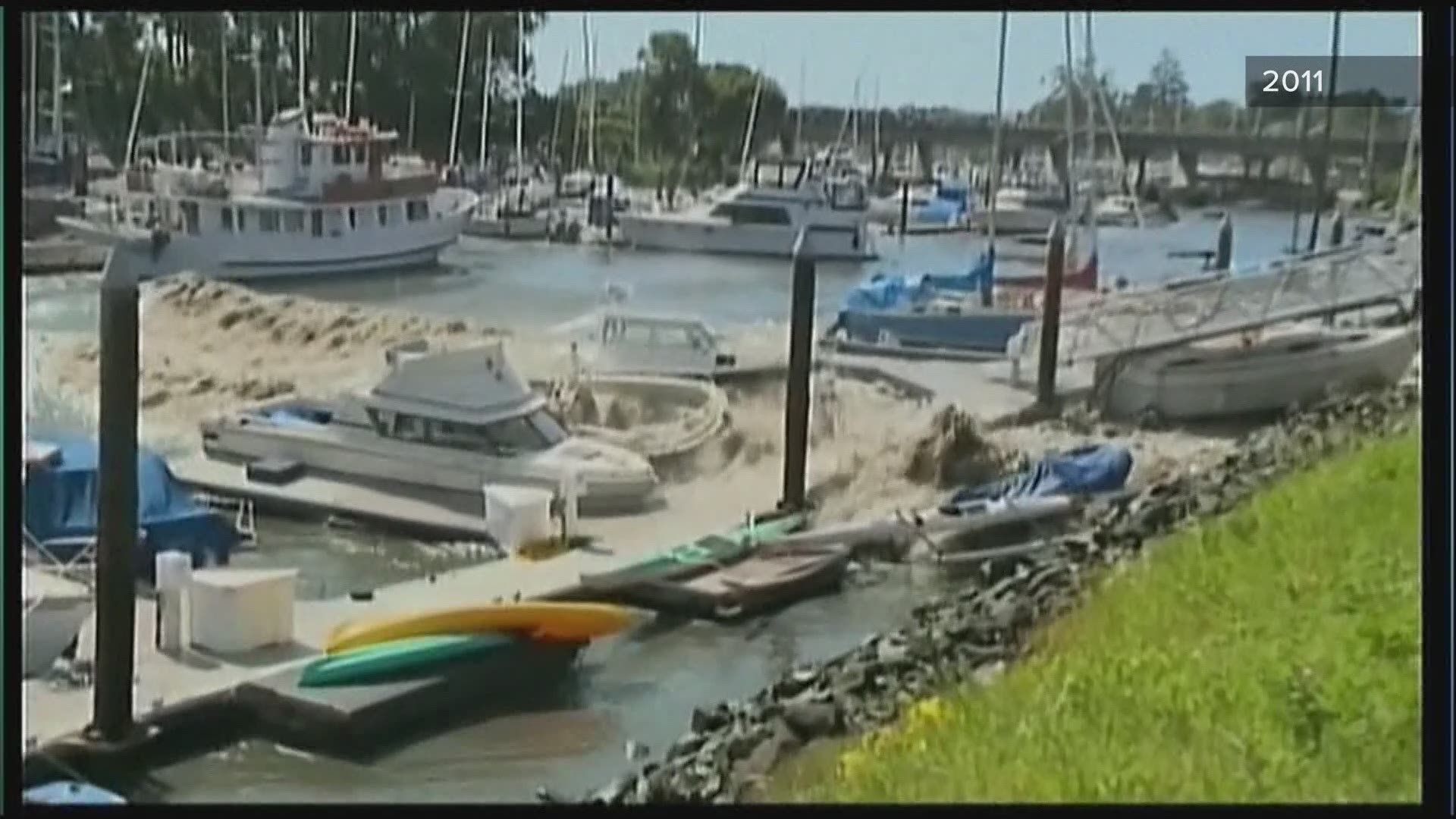 CALIFORNIA, USA — Many of us have seen tsunami warning signs at the beach directing people to the quickest evacuation route, but what might trigger a tsunami on the West Coast?

The last tsunami to hit California came from Japan, damaging more than 100 boats in Santa Cruz. The magnitude 9.0 earthquake in 2011 triggered a massive wave that traveled 5,000 miles across the ocean, causing damage up and down the West Coast as far south as San Diego.

A tsunami is more than just a big wave; it’s more like a wall of water, according to San Diego State University geologist Pat Abbott.

“A tsunami comes in and it keeps going over the beach, through the houses and over the bay," said Abbott. "It just doesn't quit."

“It's not the height of the wave that concerns me, as much as the fact that the wave is actually the wall in front of a big sheet of water, and that water mass may be miles and miles across. It's just going to run and run and run,” he said.

In 1964, a magnitude 9.2 quake hit Alaska. The resulting tsunami wiped out Crescent City along the coast of Northern California, with a monster swell killing a dozen people who thought the danger had passed.

“In Crescent City, California, people evacuated up, then looked down at their houses and businesses. They saw one, two, three, four waves. A lot of them went back down and the fifth wave was the biggest and all 12 of the deaths occurred with the fifth wave,” said Abbott.

Tsunamis can be triggered by earthquakes that cause large plates under the ocean to move upward, displacing huge amounts of water. The resulting wave can travel 500 miles an hour until it hits land, causing destruction and death.

“It may seem surprising to people, but the biggest risk comes from Alaska,” said Caltech seismologist Lucy Jones.

Jones helped create a computer model that showed what a magnitude 9.1 earthquake off the coast of Alaska could do to Southern California, more than 2,000 miles away.

“When we did this modeling, across the coast of California there was $700 million worth of damage to small marinas and ports,” she said.

The model showed the tsunami wave from Alaska hitting as far south as San Diego, with a height of about 6 to 13 feet. Many low-lying areas like San Diego’s Mission Beach and Mission Bay communities would be at risk.

“In areas like Mission Bay, everything is very flat. You're very close to sea level and you can see basically all of the Mission Bay area ends up underwater,” Jones said.

A tsunami triggered by a large, offshore earthquake in the Pacific Northwest could destroy coastal cities in Washington state and Oregon with very little warning.

It would likely take longer, perhaps five to six hours, for a tsunami triggered in that northern region to reach the southern end of the West Coast, giving residents and tourists in Southern California enough time to get to higher ground.

However, geologist Abbott warns if you live in San Diego or you are visiting Southern California, don’t get too comfortable. A smaller tsunami could be triggered by an offshore earthquake and underwater landslide, giving people only ten minutes or so to evacuate.

Tsunami signs in beach communities along the West Coast are often overlooked and ignored, Abbott said. People should pay attention to the posted evacuation routes. They’re designed to get you away from the coast and up to higher ground.

“This particular sign right here, we're near Grand Avenue and Mission Boulevard, and they're saying go east. Very frankly, where I am sitting I can see Mount Soledad a few blocks away. I would go north,” he said.

When you don’t have time to head inland, looking up could save your life.

“Kind of look around and say, ‘What's my best bet? Oh, I could go up those stairs, up to a third story building.’ That's pretty good. It's only a half a block away,” Abbott said.

Bottom line, if you’re in any coastal town in the United States or abroad – and you feel shaking or notice any abnormal ocean activity, get to higher ground fast and don’t return until you’re given the all clear by experts.

“If you are at the beach and you feel very strong shaking, leave the beach. Probably nothing is going to happen and all you have done is lost a day at the beach, but the potential upside is your life,” said Jones, the Caltech seismologist.

Jones said a tsunami also could be triggered by a volcanic eruption in Hawaii. In that scenario, people in Southern California might have about five hours warning before the wave hit, she said. That type of tsunami would only come every 50,000 years or so.