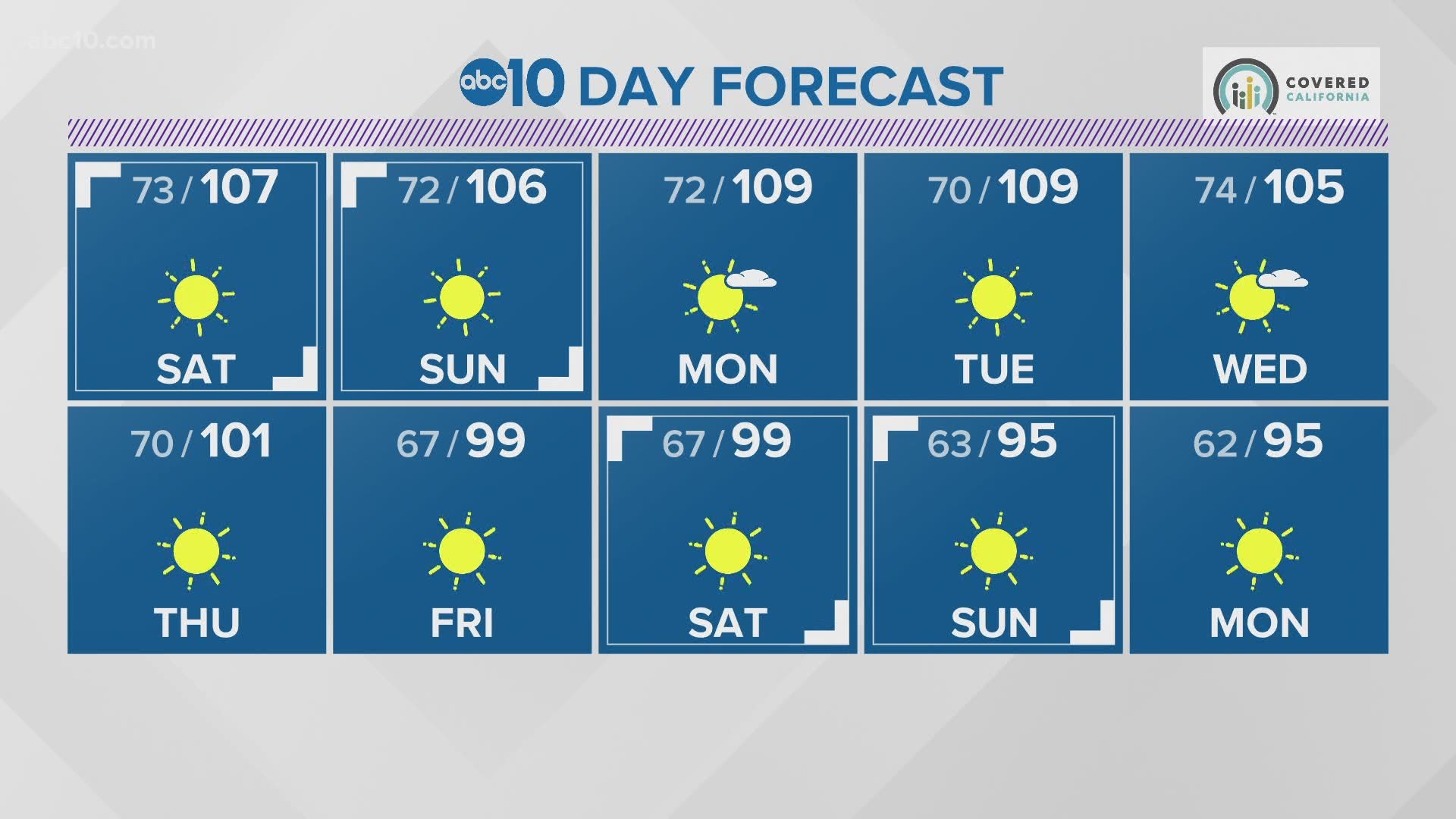 Northern California is set to experience a dangerous heatwave, with little relief in sight.

Extreme heat will continue through the middle of next week with highs from 105 degrees to 112 degrees.

A new risk develops tonight with a Fire Weather Watch in place for Northern California, including the valley. Clouds will increase with a chance of overnight and early morning thunderstorms. The combination of high heat, primed fuels and potential lightning will bring a higher risk of fire.

As we head into the weekend, the range of temperatures Northern California is expected to see will vary between 100 - 110 degrees in the hottest locations through Wednesday, Aug. 19. Saturday should be one of the hottest days, with a high near 108 degrees for the Sacramento area and a similar high for nearby cities.

If 108° is reached on Saturday, the high would set a new daily temperature record with many more possible records to fall before the heatwave is over.

Here is a look at some record temperatures across the area for the next couple of days. Some forecast highs (as seen in red) are near or slightly above record levels. #cawx pic.twitter.com/fCKqvWhapj

Because of the incoming heat, the California Independent System Operator (ISO) has issued a FLEX Alert, asking people to voluntarily conserve energy in their homes between the hours of 3 - 10 p.m. on Friday, Aug. 14.  PG&E began rolling blackout Friday evening to help stabilize the power grid.  Some of the locations that lost power were El Dorado Hills, Shingle Springles and Placerville. PG&E is hoping to restore the power to more than 200,000 by Saturday morning.

One important detail concerns early morning temperatures. Due to the lack of wind, and other factors that could help overnight cooling, the night temperatures will remain warm. This makes it difficult for homes to cool down without air conditioning and extends the time people can be affected by the heat. Kids, pets, and seniors are high-risk groups when it comes to heat-related illness and deserves extra attention during these times.

This heatwave will be long, as well, stretching until at least Wednesday, Aug. 19. Similar temperatures are forecast for the region and could end up being hotter.

In any given year, heat is the number one weather-related killer and all top-level warnings deserve attention and action.

WATCH ALSO: Tips to have a social life during the coronavirus pandemic