Trump: 'We will be 100 percent' with storm victims

Some 10,000 people remain in shelters less than a week after Florence made landfall early Friday. 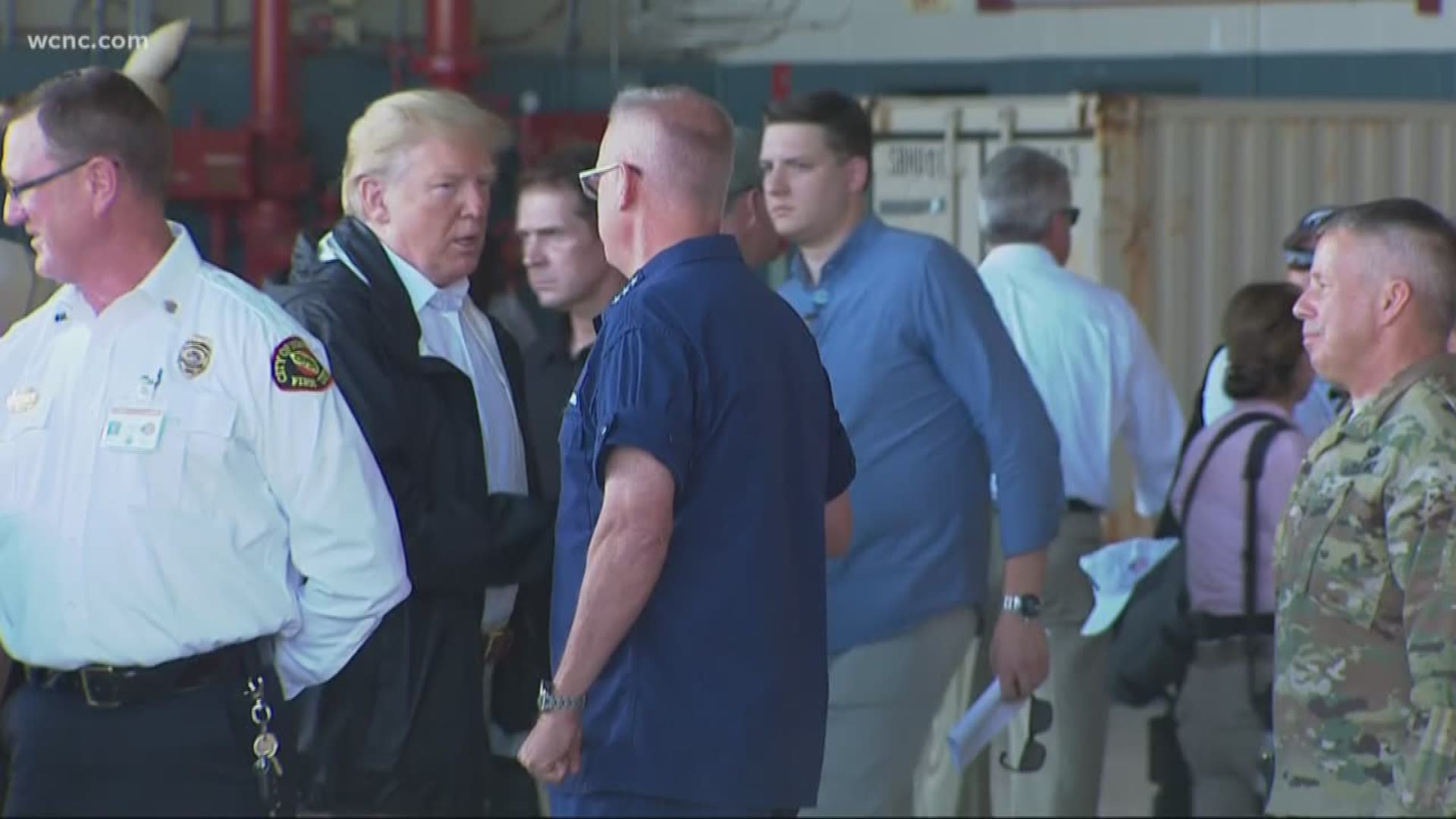 NEW BERN, N.C. (AP) — Handing out hot dogs, hugs and comforting words, President Donald Trump sought Wednesday to soothe those who suffered losses in Hurricane Florence, declaring that "America grieves for you" as he surveyed damage the powerful storm left behind.

After being briefed on the recovery effort, Trump helped hand out Styrofoam containers of hot dogs and chips at a Baptist church in New Bern, a riverfront city on the coast that experienced severe flooding. Trump's motorcade then drove through a storm-damaged neighborhood where piles of water-logged sofa cushions, mattresses and downed trees lined streets and boats lay on their sides after washing up along a grassy shore.

"How's it doing," the president asked after a woman pointed at a house. He chatted and shook people's hands as he walked along a street strewn with trash, branches and sodden furniture, offering hugs and handshakes and posing for photos. Some people applauded as he went by.

During the briefing with Gov. Roy Cooper and federal and other state officials, Trump pledged to be with storm victims "100 percent" as they recover from the torrential rains and heavy flooding that Florence left behind. A massive federal, state and local recovery effort is underway.

Cooper said Florence was "epic" in nature. It's blamed for at least 37 deaths in North Carolina, South Carolina and Virginia since coming ashore on Friday.

At Trump's first stop, Cooper briefed the president at a Marine Corps air station in Havelock, which sits among areas Florence hit hardest. The governor asked for help "cutting red tape" to get his state the federal assistance it will need to recover. He noted that farmers suffered significant losses and scores of people lost their homes. Some 10,000 people remained in shelters.

"We will be there 100 percent," said Trump, wearing a wind breaker and khaki pants, seated inside a hangar with federal and state officials. "All of the folks from the federal government that are around the table are confirming it."

Trump praised first responders and offered comfort to residents who suffered losses in the storm, saying: "To the families who have lost loved ones, America grieves with you, and our hearts break for you. God bless you. We will never forget your loss, we will never leave your side. We're with you all the way."

"And to all those impacted by this terrible storm, our entire American family is with you and ready to help. And you will recover," he said.

Trump took a moment during the briefing to ask a state official, "How is Lake Norman doing?" Told the lake was fine, Trump replied: "I love that area. I can't tell you why, but I love that area." The president has a golf club on the shores of the lake.

The storm's grim aftermath, some of which Trump was expected to see Wednesday during stops in North Carolina and South Carolina, presented a challenge for a president who has struggled at times to show empathy in moments of national tragedy.

In a video posted on social media the day before his trip to the region, Trump praised first responders, offered prayers for victims and declared the storm "one of the wettest we've ever seen from the standpoint of water."

In North Carolina, where thousands of people remain in shelters or are staying elsewhere, Cooper has urged patience, noting that roads remain treacherous and some are still being closed for the first time. On Tuesday in Wilmington hundreds of people waited in long lines for water and other essentials.

"I know for many people this feels like a nightmare that just won't end," Cooper said.

Trump spent the run-up to the storm focused on criticism of the federal response to a hurricane that battered Puerto Rico last year, rejecting the official death toll of nearly 3,000 and claiming Democrats manufactured the number to make him "look bad."

When Trump visited San Juan last October after Hurricane Maria, he pumped his fists in the air when he landed. The enduring image of the trip was of Trump at a church lobbing paper towels into the crowd as if shooting baskets. At the time, it seemed to reflect Trump's brand of playfulness. Many people in the crowd smiled and raised their phones to record the moment. But critics quickly dubbed it inappropriate for the grim crisis at hand.

Before that, Trump's trip to Texas after Hurricane Harvey battered the Houston area generated blowback for his failure to meet with victims of the storm. Four days later, he returned — and urged people at a Houston shelter to "have a good time." He also cheered on volunteers and emergency workers and handed out hot dogs and potato chips to residents. Some critics said the president's trip took on the tone of a victory lap for successful disaster management.

Mindful of the recurring criticism, Trump defended the administration's response to Florence on Twitter on Tuesday, predicting Democrats will eventually look to criticize the efforts for political reasons.

"Right now, everybody is saying what a great job we are doing with Hurricane Florence — and they are 100% correct," Trump said. "But don't be fooled, at some point in the near future the Democrats will start ranting that FEMA, our Military, and our First Responders, who are all unbelievable, are a disaster and not doing a good job. This will be a total lie, but that's what they do, and everybody knows it!"