Chain restrictions have been lifted on Interstate 80 in the Sierra after a late spring snowstorm with strong gusty winds blew through the region. 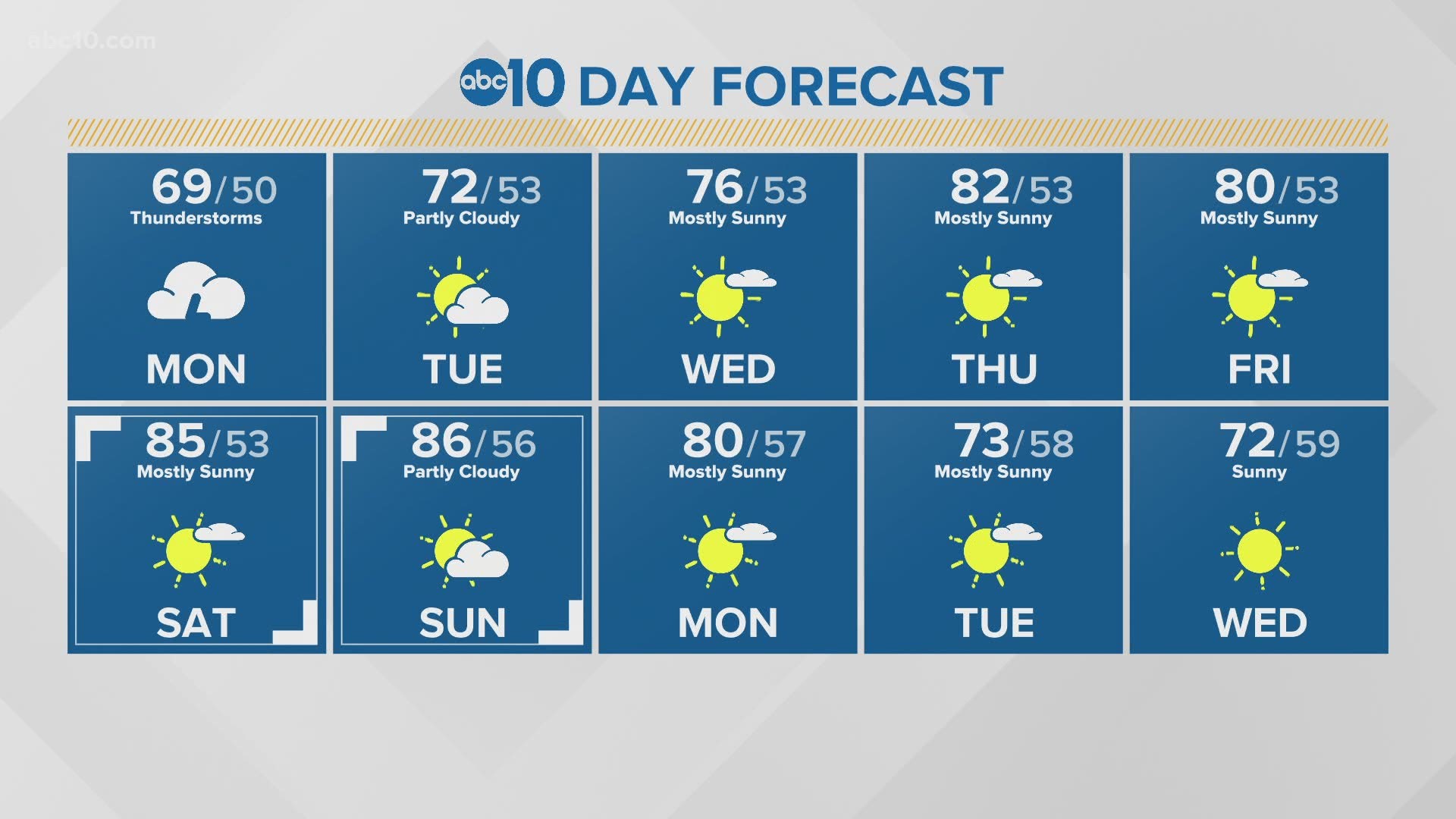 Numerous thunderstorms developing through the Sacramento and San Joaquin Valleys as well as the Sierra foothills Tuesday.

Showers will start to taper off after midnight. There's a slight chance of thunderstorms again for the Coastal Range and Sierra foothills.

Winter Storm Warning will continue through 5 p.m. Tuesday with snow level near 6,500 feet. Chain controls and difficult driving is expected on and off through Tuesday.

A spring storm is bringing scattered rain across the Northern and Central California, snow and strong wind in mountain areas and the possibility of flash flooding in valleys and wildfire-scarred areas.

The National Weather Service says the source of the late season storm is an unusually deep and cool upper-level low-pressure area just off the California-Oregon border. Early morning snow accumulations in the Sierra have occurred at locations including Donner Summit on Interstate 80.

Chain restrictions have been lifted on Interstate 80 in the Sierra after a late spring snowstorm with strong gusty winds blew through the region but more snow and rain is in the mountain forecast into Tuesday.

A developing weather pattern shows the increasing potential for thunderstorms on Monday in the Sacramento and San Joaquin Valleys as well as the Sierra Foothills. These thunderstorms have the potential to bring heavy rain, small hail and dangerous lightning. The heavy rain could lead to some localized flooding and mudslides around recent burn areas.

The cold air moving into Northern California will not only increase the instability and risk of thunderstorms, but it will also help drop the snow level in the Sierra. Lake Tahoe mainly saw rain on Sunday. but it will start seeing snow by Monday morning.

A Winter Weather Advisory is in place through 10 a.m. Monday near Lake Tahoe above 7,000 feet. Wind gusts could be near 90 m.p.h. one to eight inches of snow accumulation is possible.

A Winter Storm Warning is in effect now for the Sierra, with heavy snow bringing chain controls, difficult travel, and slow travel for trucks and essential workers. We could see 6 - 8 inches of snow, or more, over the mountain passes. This is a very late season storm and many travelers will not be equipped for winter weather travel. Be careful and check ahead. The winter weather will slow down north to south and it will expire at the latest around 5 p.m. Tuesday, May 19.

A few inches of snow and more than 1.5 inch  of rain was reported early Monday around Lake Tahoe. Truckee, California had 1.75 inches  of rain. About 1.5 inches of rain fell at Homewood on Tahoe’s west shore, followed by an inch of snow.  About a half-inch of rain fell on the west edge of Reno.