The first storm of the season arrives in Northern California, and it’s expected to have huge impacts! 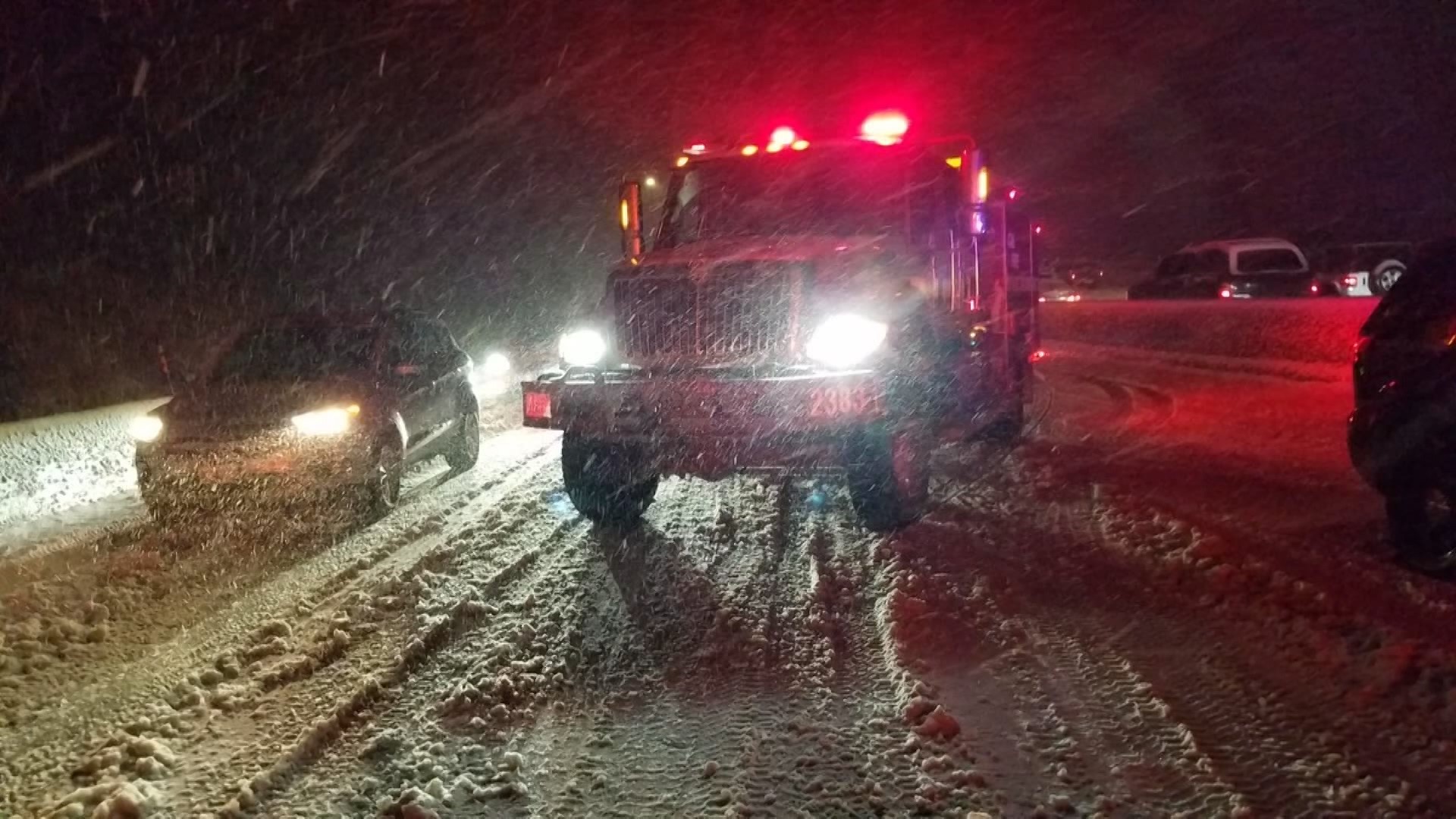 Nearly 2 feet (60 centimeters) of snow has fallen in the Sierra and more is in the forecast through the holiday but forecasters say the worst of the weather appears to have passed.

Commercial trucks are prohibited in the westbound lanes, but U.S. Interstate 80 is currently open to passenger vehicles with chains and four-while drive vehicles with snow tires all the way from Reno to Sacramento.

A winter storm warning continues in the Tahoe area through 4 p.m. Thursday, but the National Weather Service has dropped the threat of blizzard conditions from the forecast.

Up to another 10 inches (25 centimeters) of snow is possible at lake level with up to 18 inches (45 cm) at the highest elevations.

A winter weather advisory is set to expire at 4 p.m. Wednesday in the Reno and Carson City areas, where up to 4 inches (10 cm) of snow has fallen and another couple of inches is possible.

A Sierra snowstorm temporarily shut down part of Interstate 80 north and west of Lake Tahoe on Tuesday and forecasters warned worse weather was on its way, including possible blizzard conditions.

The Tahoe area is under a winter storm warning through 4 p.m. Thursday. The worst conditions were expected late Tuesday night and early Wednesday with gusts up to 85 mph (136 kph) over ridgetops and up to 2 feet (61 centimeters) of snow above elevations of 7,000 feet (2,130 meters).

“A period of blizzard conditions with zero visibility is possible,” the National Weather Service in Reno said.

A 40-mile (64-kilometer) stretch of I-80 was closed in both directions over Donner Pass west of Truckee, California, for about five hours Tuesday before the eastbound lanes reopened about 5 p.m. and the westbound lanes followed about an hour later.

The California Highway Patrol (CHP) said the closure was necessary so crews could clear the roadway after numerous collisions and spin outs. There were no immediate reports of any serious injuries.

Chains were required Tuesday night except four-wheel-drive vehicles with snow tires from the Nevada-California line to 3 miles (5 km) east of Gold Run, California.

A winter weather advisory continues until 4 p.m. Wednesday for the Reno and Carson City areas, where up to 5 inches (127 millimeters) of snow is expected with winds as high as 55 mph (88 kph).

Caltrans also shut down a large stretch of Interstate 5 near the California-Oregon border. I-5 is closed in both directions between Fawndale and Yreka, according to Caltrans.

Northbound traffic on I-5 in Dunsmuir is moving slowly, officials said, but drivers will only be allowed as far as Weed, Calif. Drivers heading southbound on I-5 should expect a 2-hour delay, at minimum, Caltrans said.

In eastern Nevada, the weather service issued a winter storm warning effective from 4 a.m. Wednesday to 4 p.m. Friday for northeastern Nye County and White Pine County on the Utah line, where 6 to 10 inches (15 to 25 centimeters) of snow is possible. Winter weather advisories have been issued for parts of Elko, Lander, Eureka and Humboldt counties.

The stormy weather and a power outage affected both the San Francisco and Oakland international airports.

KPIX-TV says the Federal Aviation Administration (FAA) imposed a ground delay at San Francisco International Airport Tuesday because of the weather, cutting the number of arrivals in half.

Oakland International Airport lost power for about 90 minutes Tuesday evening, shutting down its security checks and causing some flight delays and a couple of diversions.

It’s unclear what caused the outage but it came as thousands of people in Oakland and further south lost power during the storm.

All lanes have reopened on Interstate 80 in a Sierra snowstorm north of Lake Tahoe but forecasters warn worse weather is on the way, including possible blizzard conditions.

A 40-mile (64-kilometer) stretch of the interstate connecting Reno to Sacramento was closed in both directions for about five hours Tuesday over Donner Pass west of Truckee, California.

Westbound traffic was released about an hour after the eastbound lanes were reopened about 5 p.m.

Chains are required on all vehicles except four-wheel-drive vehicles with snow tires from the Nevada-California line to 3 miles (5 kilometers) east of Gold Run, California.

The National Weather Service says winds gusting up to 85 mph (136 kph) could create blizzard conditions with zero visibility Tuesday night into Wednesday. Up to 2 feet (61 centimeters) of snow possible at elevations above 7,000 feet (2,130 meters).

Some lanes on a highway over the Sierra Nevada is moving again, but a 40-mile (64-kilometers) stretch is still closed north of Lake Tahoe because of a powerful snowstorm.

Westbound traffic is still being held at Truckee, California, about 20 miles (32 kilometers) west of the California-Nevada line. Authorities don’t have an estimate of when those lanes will reopen.

The Lake Tahoe area is under a winter storm warning through Thanksgiving.

The National Weather Service says winds gusting up to 85 mph (136 kph) could create blizzard conditions Tuesday night into Wednesday morning with up to 2 feet (61 centimeters) of snow possible at elevations above 7,000 feet (2,130 meters).

California transportation officials are advising drivers not to travel in some areas.

Caltrans said drivers should expect delays and closures as the agency and California Highway Patrol work to "clear the roadway during the first major storm of the season."

Interstate 5 is closed to trucks north of Redding, according to the National Weather Service Sacramento.

A snowstorm in the Sierra has shut down U.S. Interstate 80 in the mountains west of the Nevada-California line.

The California Highway Patrol said traffic in both directions was being held on both sides of Donner Pass north of Lake Tahoe Tuesday afternoon so crews could clear the highway of multiple spinouts and collisions. There was no immediate report of any serious injuries.

The Tahoe-area is under a winter storm warning through 4 p.m. Thursday. The National Weather Service says winds gusting up to 85 mph could create blizzard conditions Tuesday night into Wednesday morning with up to 2 feet (61 centimeters) of snow possible at elevations above 7,000 feet (2,130 meters).

Multiple traffic collisions have been reported in Truckee and Gold Run, according to the California Highway Patrol.

Ten traffic collisions on eastbound and westbound Interstate 80 were reported to authorities between 1:28 p.m. and 1:57 p.m. Tuesday.

Northern California and southern Oregon residents are bracing for a “bomb cyclone” weather phenomenon that’s expected at one of the busiest travel times of the year.

The National Weather Service says the storm expected Tuesday into Wednesday could be like nothing experienced in the area for 20 years. Wind gusts of 75 mph are expected in some areas and waves of 35 feet or more could slam the coast.

Mountain passes in Northern California and Southern Oregon could get up to two feet of snow. The center of the low-pressure system is expected to make landfall late Tuesday afternoon between Crescent City, Calif., and Brookings, Ore.

A “bomb cyclone” forms when air pressure drops by 24 millibars in a 24-hour period. Forecasters say this storm’s air pressure has dropped even more quickly than that.

He says snow could fall as far south as Bishop, California.

The big holiday storm is expected to bring every type of weather precipitation along with strong winds as you head out to visit family for Thanksgiving.

Beginning Tuesday morning, rain and snow will start to fall around lunch time for the Valley, Foothills, and Sierra. The heaviest rain could be seen by the evening commute.

Strong winds will also accompany the rain and snowfall, making it hard at times to see. Expect 20 - 30 mph winds with blowing rain and snow.

The Tioga Pass on State Route 120, one of the main routes into Yosemite National Park, will remain closed. CalTrans says it could close more roads depending on the storm’s severity.

Snow will fall as low as 1,500 feet and possibly 1,000 feet by Wednesday heading into Thanksgiving.

Wednesday will be on of the biggest travel days of the year and travelers will see rain and scattered showers for Northern California. By Friday, as much as a .75 - 1.5 inches of rain may be recorded. Sierra snow will ease, but still be falling.

Thanksgiving Day will see more scattered showers and thunderstorm chances, but tapering off into the evening. The next storm is set to arrive over the weekend from Saturday evening through Sunday.

Holiday travel expected to be impacted by incoming storm