After a Safeway warehouse employee dies from COVID-19, coworkers say the company took too long to act

Safeway officials said they were "saddened to learn" about the death but have yet to release the number of employees in the Tracy center that have tested positive. 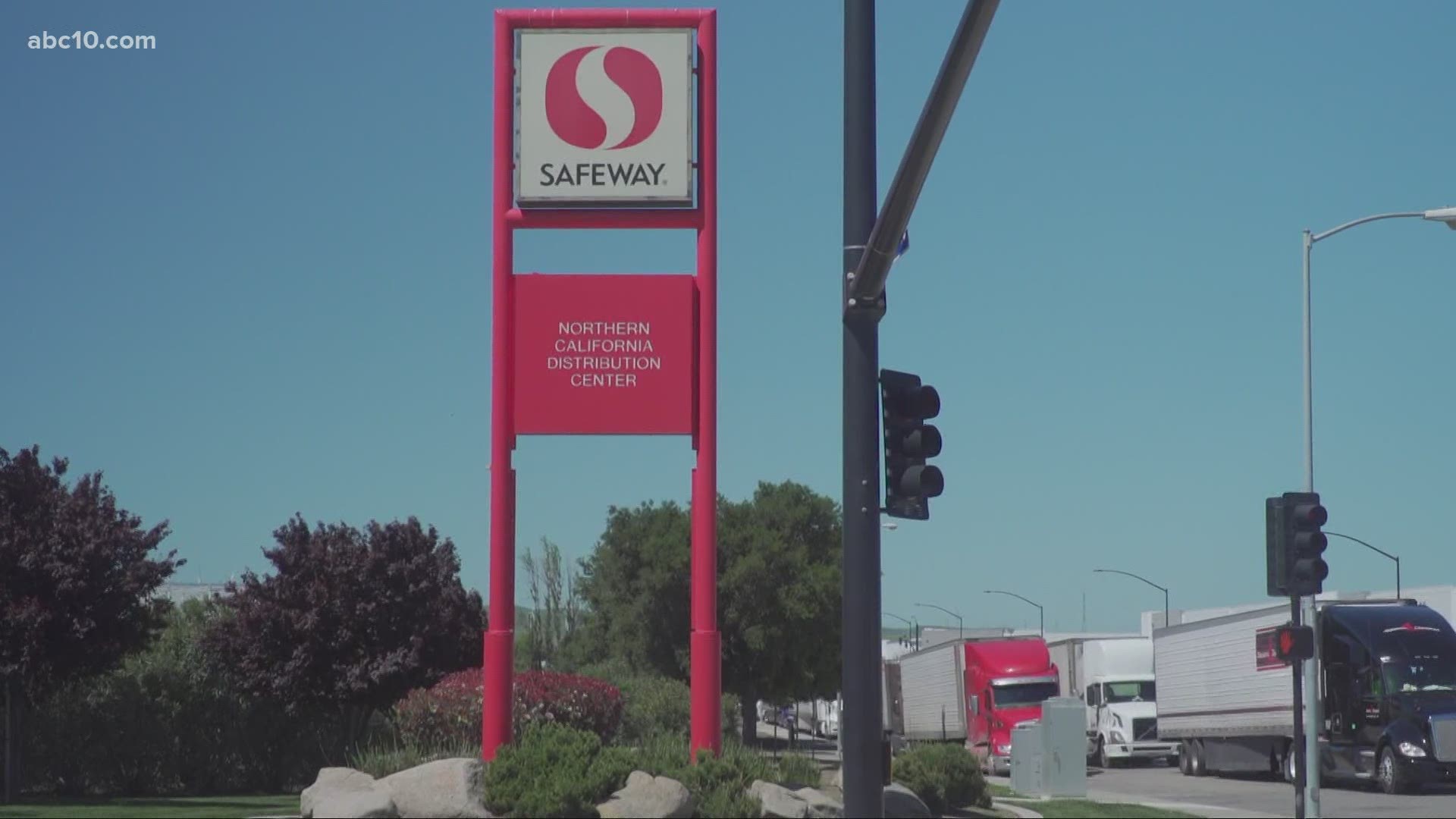 TRACY, Calif. — Safeway confirmed Tuesday the death of an employee at their distribution center in Tracy due to complications of COVID-19. It's a tragedy that some employees at the center worry may have been prevented if Safeway acted sooner.

"I might get in trouble for this... but [Safeway] hasn't really done anything," Richard said. (Richard is not his real name. Concerned about retaliation, multiple employees agreed to speak with us as long as we protected their identity. All names have been changed to pseudonyms for those who spoke with us.)

Richard spoke with ABC10 on April 7, expressing an array of concerns around lack of sanitation and overall concern for employees. He said employees that told their supervisors they were sick were told to stay unless they wanted to get "points," i.e. black mark in attendance.

After a certain amount of points, employees get warnings and then consequences.

"That's gross negligence on their part. A total lack of care for him as a human being and his health," said Richard in regards to his colleague being told he had to stay at work, despite being ill.

RELATED: On the front lines with 'essential' workers: What's working and what's not

After our report, the Safeway Distribution Center began taking temperatures of the thousands of employees there as well as providing them with masks and more hand sanitizing stations.

But now that a worker has died from the virus, more employees are concerned that Safeway's response is simply too little, too late.

"There were guys that were coughing and they were trying to hide it," said another worker, Vincent. "The co-worker who passed away, [coworkers] said he actually had a cough attack so bad during break one time that they asked if they needed to call 911."

Vincent confirmed a GoFundMe recently launched was for the employee who died. In less than a day since it was started, the GoFundMe has raised over $21,000 for the man's family and funeral expenses.

In a statement to ABC10, Safeway officials said they were "saddened to learn" of the death of one of their employees and that the "health and safety of all our associates is our top priority."

The company has yet to provide a specific number of employees that have tested positive for COVID-19.

"The mindset of the employees is that the company doesn't care about us, that we're just numbers and workers," said Vincent. "I think if they were to have a little more concern for us and paid a little more attention to this being a real possibility of us getting sick then they would've taken those preventative steps beforehand."

The high demand of keeping grocery stores stocked has forced employees at the distribution center to work overtime — often 16 hour days for six days a week.

Vincent works in the distributions produce department, along with around 450 others he estimates. He said while lucrative, their schedule is exhausting. He said labor laws allow them four days off a month so they're taking just one day a week off currently.

It's a lot on top of an already physically demanding job; Vincent said on a regular work day they lift a total of 30,000 lbs and walk around 10 miles.

He's worried the physical exhaustion will make him more susceptible to getting COVID-19. That's why he took unpaid days for rest and wearing a mask before required, an approach that was initially much different than his coworkers.

It's a bad situation he said he believes is partially Safeway's fault for slowly implementing procedures to protecting the 1,800 employees at the warehouse. He added, though, that some of the workers did not take the pandemic seriously, and, because of the company's push for more hours, continued to work despite showing coronavirus symptoms, including the employee who passed away who worked in the same produce department as Vincent.

"Overtime is hard to get," said Vincent. "So people who are sick don't want to stay home because they make that money so it's creating a bad situation."

Safeway said they've been asking associates to stay home if a member of their household has been diagnosed or is suspected to have COVID-19 or if they have symptoms. They said they're also implementing the following procedures in the distribution center:

When asked what else he would like to see changed, Vincent said he's happy with the actions Safeway has taken but worries they were taken far too late.

ABC10 also reached out to San Joaquin County's Public Health Department to see if they were taking action as the distribution center resides under their jurisdiction.

In a statement, department officials said, "San Joaquin County Public Health Services is working in collaboration with the California State Department of Health and Safeway Occupational Health on containment and infection control measures."