California's Delta smelt are dying: How this affects the state's water

The Delta smelt are disappearing from the Sacramento-San Joaquin Delta entirely, indicating the health of local water. 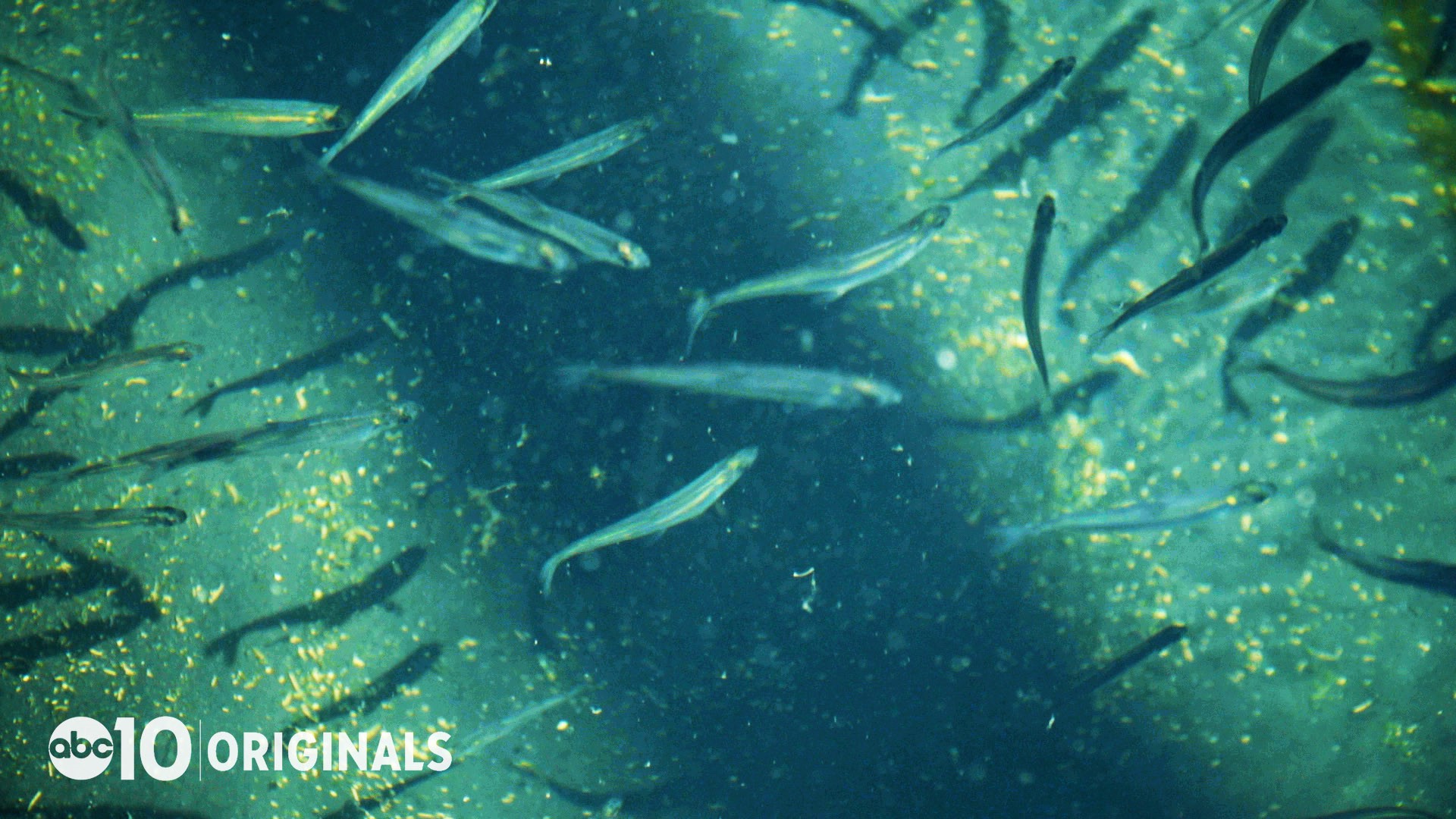 SACRAMENTO, Calif. — The Delta smelt is such a small and translucent fish that it often disappears from view when it swims in the turbid waters of its home in the Sacramento-San Joaquin Delta.

However, it's also been disappearing from the Delta entirely.

“The Delta smelt has gone from being one of the more abundant fish in the Delta to being just on the verge of extinction today,” Peter Moyle, an Emeritus Professor of Fish Biology at UC Davis, said.

Moyle has been studying Delta smelt for over 40 years. In the 1980’s, he began to see a startling drop in the number of Delta smelt in his population samples. The fish was listed as threatened, then endangered, under the California Endangered Species Act. The California Department of Fish and Game’s Fall Midwater Trawl Survey keeps tabs on fish populations and last year's results showed zero Delta smelt were in the wild.

There are more than a few factors pushing the Delta smelt toward extinction. Ted Sommer, lead scientist at the California Department of Water Resources, lists the historic droughts, rising temperatures, invasive species, contaminants, and the long-term conversion of natural marshland in the Delta to agriculture and cities, all as contributions to the Delta smelt’s decline.

“Delta smelt to some degree are getting it from all directions,” Sommer says.

While it’s impossible to point to one thing as the “smoking gun” in the disappearance of the Delta smelt, one notable problem is that its home — the Sacramento-San Joaquin Delta — is at the center of the fight over water in California.

“There’s over 2,000 water diversions in the Delta. It’s the hub for about 25 million people’s water supply,” Sommer explained.

Freshwater from the Delta supplies drinking water for communities across Southern California. Farms and agricultural businesses in the Central Valley also use this water.

“It makes a huge difference in terms of the way the Delta works as an ecological system,” Moyle said about pumping water to Southern California. "Not only do they divert the natural flow of water, but they can also drain fish along with the water."

Pumping restrictions go into effect during certain times of the year to prevent loss of species like the Delta smelt and to protect the environmental health of the Delta. These restrictions have been a sticking point for farm owners to the south.

In May of 2016, then-presidential candidate Donald Trump held a rally in Fresno, at which he complained that, “They’re trying to protect a certain kind of three-inch fish.”

The Westlands Water District, which represents the interests of farm owners in the San Joaquin Valley, helped organize that rally. A former Westlands lobbyist, David Berhnardt, is now Secretary of the Interior under President Trump. These farm owners say that water is being wasted, instead of sent to them.

“You have a water problem that is so insane, it is so ridiculous, where they’re taking the water and they’re shoving it out to sea,” Trump said at the rally. “Nobody even knows why, and the environmentalists don’t know why.”

But Peter Moyle says people do know why. Water from the Delta flows naturally out to the ocean through the San Francisco Bay. These “outflows” can be reduced using gates in Suisun Marsh, but Moyle explains that the water that flows through the Delta to keep it fresh for plant and animal life also keeps water fresh that goes into the pumping plants.

“So that’s a big deal,” Moyle says. “I haven’t noticed anybody in L.A. wanting to drink saltwater recently.”

Farms would also have a problem if the water coming from the pumps was salty.

As for the pumping restrictions, Trump signed a Presidential Memorandum on Oct. 19, 2018, with the instructions “to appropriately suspend, revise, or rescind any regulations or procedures” in the Endangered Species Act or National Environmental Policy Act that would “unduly burden” water deliveries. State officials have pushed back on this plan.

Because Delta smelt is a species unique to the San Francisco estuary, keeping it alive is partially a heritage issue. To that end, the UC Davis Fish Culture in Conversation Lab near Tracy has had a lot of success raising captive populations. Researchers there are making attempts to re-introduce the Delta smelt into the wild, but Moyle is not optimistic the Delta smelt will end up as anything other than a domesticated species.

The main concern surrounding the decline of the Delta smelt is what it suggests about the changes taking place in the Delta.

Delta smelt have historically been used as an "indicator species", meaning scientists could gauge the ecological health of the estuary based on how well the Delta smelt were doing.

“And by the time a species like the Delta smelt is endangered, it’s probably not a good indicator of your system anymore," Moyle said. "If you’re restoring the system, actively working to bring it back to the conditions when the delta smelt were abundant, it would be a good indicator. But those times are gone.”

While state agencies are working to preserve the environmental health of the Delta, it may be too little too late for the Delta smelt. Other native species like the longfin smelt, Sacramento split-tail, and salmon are also experiencing population decline, as well.

The Delta that people enjoy for boating, bird-watching, and fishing, is an ecosystem under duress. In addition to that long list of factors contributing to the Delta smelt’s decline, Moyle says subsidence and weak levees in the south and central Delta also threaten the likelihood of maintaining the Delta in its current form, but parts of it can still be salvaged.

PG&E power shutoff | Is it a result of the company's political power plays trumping public safety?