Are the Newsom administration's dismal recession forecasts an outlier or a "poker bluff" aimed to cause pressure for financial assist from the feds? 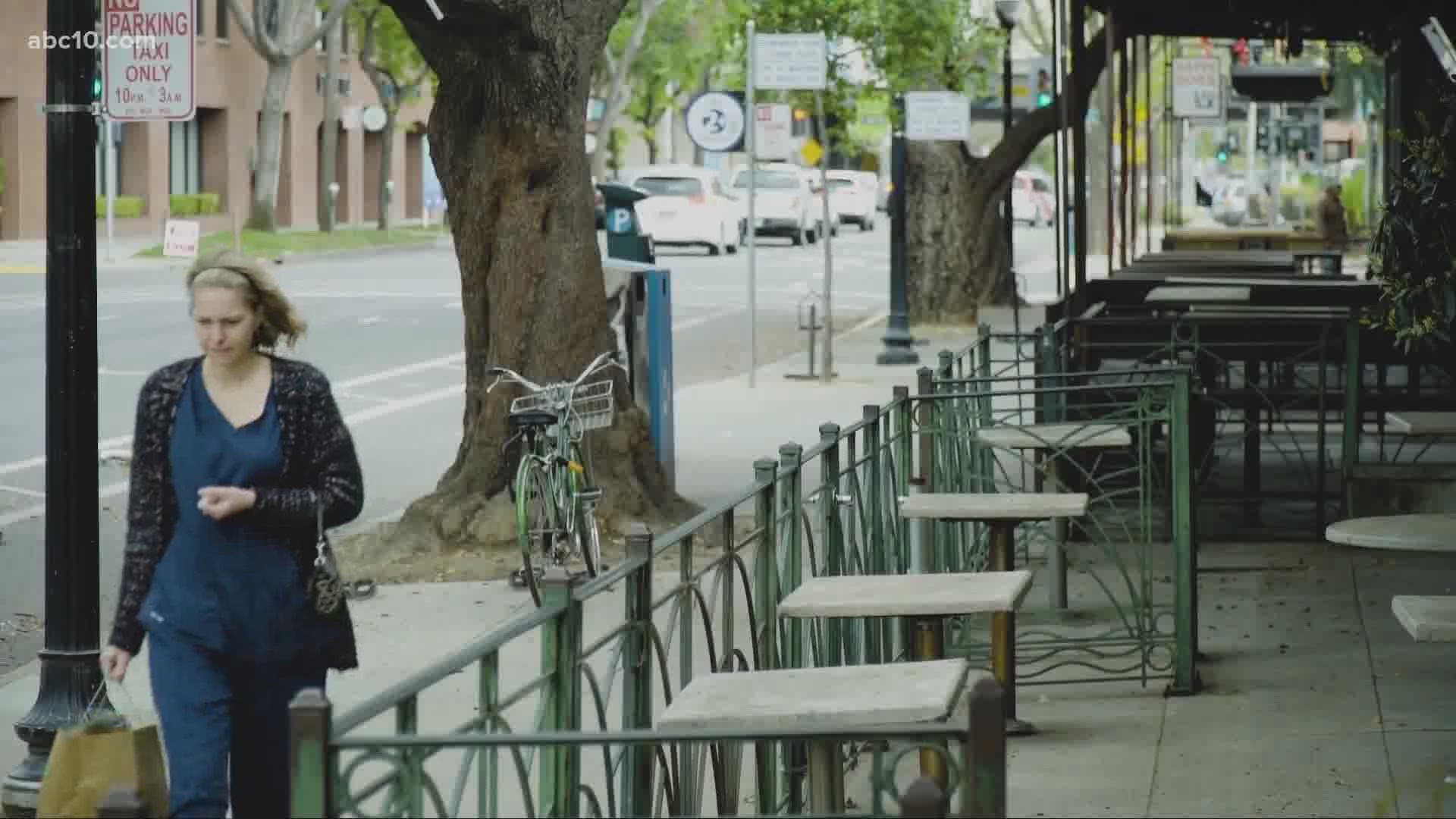 SACRAMENTO, Calif. — Ten out of ten economists agree: COVID-19 is absolutely lousy for the California economy.

Forecasters across the state have run the numbers and found that — at least in the next three months — overall economic activity will decline and the joblessness rate will remain at an historic high. No Ph.D required to deduce why: Statewide shelter-in-place orders coupled with the reasonable fear of a deadly pathogen have slowed the regular churn of transactions that make up the world’s fifth-largest economy.

But among the state’s prognosticators, no one’s crystal ball has been darker than the governor’s.

Last week, Gov. Gavin Newsom proposed a revised budget for the coming fiscal year that projects a massive gap between the money coming in and the money going out: $54 billion.

The finance wonks within the Newsom administration came to that 12-digit total in part based on an equally dire view of the state’s economic future. According to the state’s Department of Finance, unemployment in California will peak at nearly 25% before June. It will then remain above 20% for the rest of the year and above the highest unemployment rate of the Great Recession until the spring of 2023, they say.

Those are grim numbers. Much grimmer, in fact, than those projected by other notable economic forecasters in California.

Budgetary experts outside the administration offered a mix of explanations. Some said Newsom’s economic forecast simply reflects the uncertainty inherent in trying to predict the future during an unprecedented global crisis.

Others characterized the governor’s projections as “difficult to comprehend,” “preposterous” or an overly-pessimistic “poker bluff” intended to extract more support from the federal government.

Irena Asmundson, chief economist at the state Department of Finance, noted that her projection assumes a bounce-back that will take about as long as the one that followed the end of the Great Recession.

“We think that we’re going to recover to the pre-recession peak in about six years…even though our drop is much bigger,” she said. “So from that perspective, we’re actually being extremely optimistic.”

The Legislative Analyst’s Office, the nonpartisan agency that analyzes the budget for state legislators, released two projections of its own: a rosy “U-shaped” economic bounce-back and a slower, more painful “L-shaped” return to normal. That more dire projection has the state unemployment rate maxing out at 11.5% in 2020 — far better than the Newsom’s assumed annual average of 18%.

But overall, Petek said Newsom’s grimmer economic forecast is “reasonable.” The administration’s estimate for the state’s total haul of tax revenue next year is pretty close to LAO’s guess. Given the profound uncertainty of the moment, a wide array of predictions should come as no surprise.

“We don’t think we know, by any stretch of the imagination, what’s going to happen,” added Ann Hollingshead, senior fiscal and policy analyst with the LAO. “Unfortunately the state does need to pass a budget by June 15, and so we’re just going to give it our best shot.”

Economic forecasts are always built on a series of assumptions. In putting together UCLA’s Anderson Forecast of the state economy director Jerry Nickelsburg said he presumed that the worst of the pandemic is over. The forecast, due to be published soon, will show the state unemployment rate topping out at roughly 18% before “we start growing out of the depths” in the second half of the year, he said.

But during a recession driven by a novel viral outbreak, the assumptions built into the current batch of forecasts don’t even fit within the average economists’ wheelhouse, said Mark Schniepp, director of the California Economic Forecast, a Santa Barbara consulting firm with public and private sector clients

The downturn “wasn’t caused by any particular imbalance in the economy — this was done by a deliberate shutdown,” he said. “The rules for getting things back up and running are going to be all over the place, and after that nobody knows how things are going to go. Not even the epidemiologists know and they’re the experts, we’re not the experts.”

Even so, Schniepp said he is skeptical of Newsom’s economic forecast of sluggish growth for years to come.

“It appears that they are assuming the economy will be essentially shut down until a vaccine is developed, or a cure,” he said. And he called that unrealistic.

Not so, said Asmundson. Instead, she said, it just takes time for the unemployed to find new jobs and for businesses to decide that enough customers are showing up to start hiring again. The residual fear of the virus could slow that process. “Given that this is a new disease (and) there are so many unknowns left — how it transmits, whether people remain immune, whether or not we will have a vaccine, who is affected, what are even the symptoms,” she said, “I look at that and I think, are people actually going to feel comfortable bouncing right back in two to three years? And I just don’t know.”

Chris Thornberg, founding partner of the consulting firm Beacon Economics, had a blunter way of characterizing the governor’s forecast: “It’s just preposterously negative…How can you say that out loud without giggling?”

Though the most obvious comparison to the current pandemic-induced recession is the last “once in a generation” economic crises, the Great Recession, Thornberg said that’s not the right reference point. “The worst recessions are the ones that come after the collapse of some massive financial bubble,” he said. Recoveries can drag on for years as borrowers try to pay down their debts simultaneously, banks are slow to begin lending again, and certain sectors of the economy scale down to more sustainable long-term levels.

Thornberg said he does not foresee such long-term structural damage to the economy this time.

Of course, just because Newsom’s economic forecast is the gloomiest doesn’t necessarily mean it’s inaccurate. Fears of contagion could keep shoppers out of stores for years to come. Lock-down orders could become a regular feature of California life.

“I would love to be wrong about my forecast,” said Asmundson at the Department of Finance.

But state Sen. John Moorlach, a Republican from Costa Mesa and one of the state’s more vocal conservative critics on budget issues, said he believes the governor may be painting an hyperbolically dark picture of the future in order to extract more aid from the federal government.

“Gavin has to do some awkward things to try to get federal help, but I find these tacky bluffs a little disturbing,” he said. “I think it’s brave but I think it’s tacky.”

In announcing his revised budget last week, the governor said that roughly $14 billion in cuts could be avoided if the federal government grants more money to the state.

Last week in Washington DC, the Democratic-controlled House passed another $3 trillion relief bill with roughly one third of the money designated for cash strapped cities and states. Jerome Powell, the Federal Reserve chairman appointed by President Trump, has also joined the call for more Congressional support, calling it “costly but worth it if it helps avoid long-term economic damage” on Sunday. But Republicans in the GOP-controlled Senate are split over whether they will take up the proposal.

Newsom has been stepping up the political pressure. On CNN’s “State of the Union” on Sunday, the governor said that for states like California that “are facing unprecedented budgetary stress, it is incumbent on the federal government to help.”

Today, the 91-member taskforce that the governor assembled to help steer the state’s recovery sent a letter to bipartisan Congressional leaders.

“Without additional assistance from the federal government, the very programs that will help people get back to their lives and get back to work – from childcare to job training to small business support – will all be forced up on the chopping block,” the letter reads.

WATCH MORE: California is beginning to reopen. So is it safe to go to the dentist?