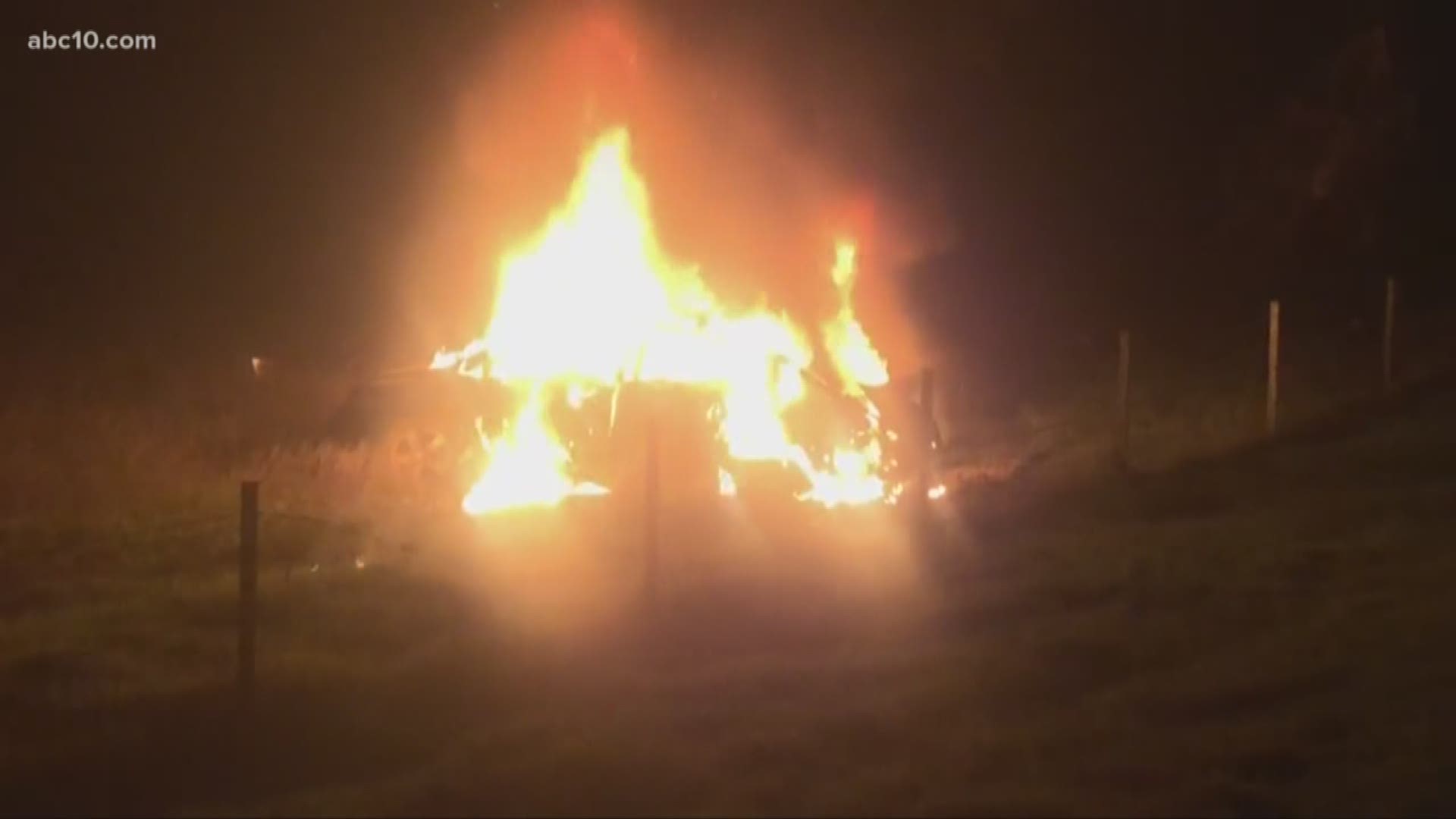 STOCKTON, Calif. — There are superheroes in movies and on TV, but every so often you come across one hero who is for real.

On Sunday morning around 2 a.m., Carter was driving back to Stockton from Los Angeles in a van on Highway 99 between the towns of Tulare and Tipton.

He and eight other teammates are part of the Stockton semi-pro football team called the Nor Cal Lions. They were on their way home from a game when Carter saw a fire off the freeway.

"I woke the guys up and told the guys, hey, look there's a tree on fire," explained Carter. "As I approached the fire I realized that there was a car that was on fire."

That's when Carter put his 6' 4", 265 lb frame and athletic skills into action. He darted out from the van, jumped a barbed-wire fence and got to the flaming vehicle.

"I realized there was a guy on fire. And, I said I needed to help this guy,"

With flames all around the car and risking his own life, Carter tried to pull the man out but ended up ripping the man's shirt while stumbling backward.

Carter realized he needed a knife or something sharp to cut the man's seat belt off. Moments later, a man handed Carter what appeared to be bolt cutters.

"As I get to the car where the guy was sitting, he kind of felt defeated, like he was giving up," said Carter.

But, Carter pressed on.

"So, I went to the car. The car, like, blazed-up, kind of burned my face. So, as I turned away and went to go back to cut it, that's when I realized the fire burned the seat belt," said Carter.

Carter said the man was able to stand-up. So, he grabbed the man, dragged him from the car and told him to drop and roll.

The man was still on fire.

"So, I rolled him over and started patting him down. Some bystanders said here's some water so I got some water as he stood up, poured it on him and was able to pull him a little way further from the car," said Carter.

Carter says the only thing the man said to him was "don't drag me, I'll stand up."

Carter had saved the man's life.

"I could not allow him to die right in front of me. Panic set in and I just said hey, I'm not going to let you die on my watch," said Carter.

His close friend, Jamie January, was in the van and used his cell phone to record Carter dragging the man from the car.

"The strength that it took. The speed that it took. You know what I'm saying. It all came in one. There was people trying to help this guy, but they couldn't," said Jamie January. "I just seen a hero, a superhero out there, like literally."

He said he wasn't looking for notoriety. He just wanted to know how the man he saved was doing more than a week later.

"George is a great guy. He's always willing to help. Always there to lend a helping hand," said Langston Hughes Academy Principal Charles McGill. "I think he has a heart for helping people. So, not surprised at all."

The Tulare County Fire Department says the call came in as a solo vehicle accident.

The man in the car suffered moderate injuries with burns to his back. He was transported to a hospital that morning for treatment.

Carter says he never thought about himself during the rescue.

"No, not at all. I didn't think about my own life. I was thinking about him and getting him out," says Carter. 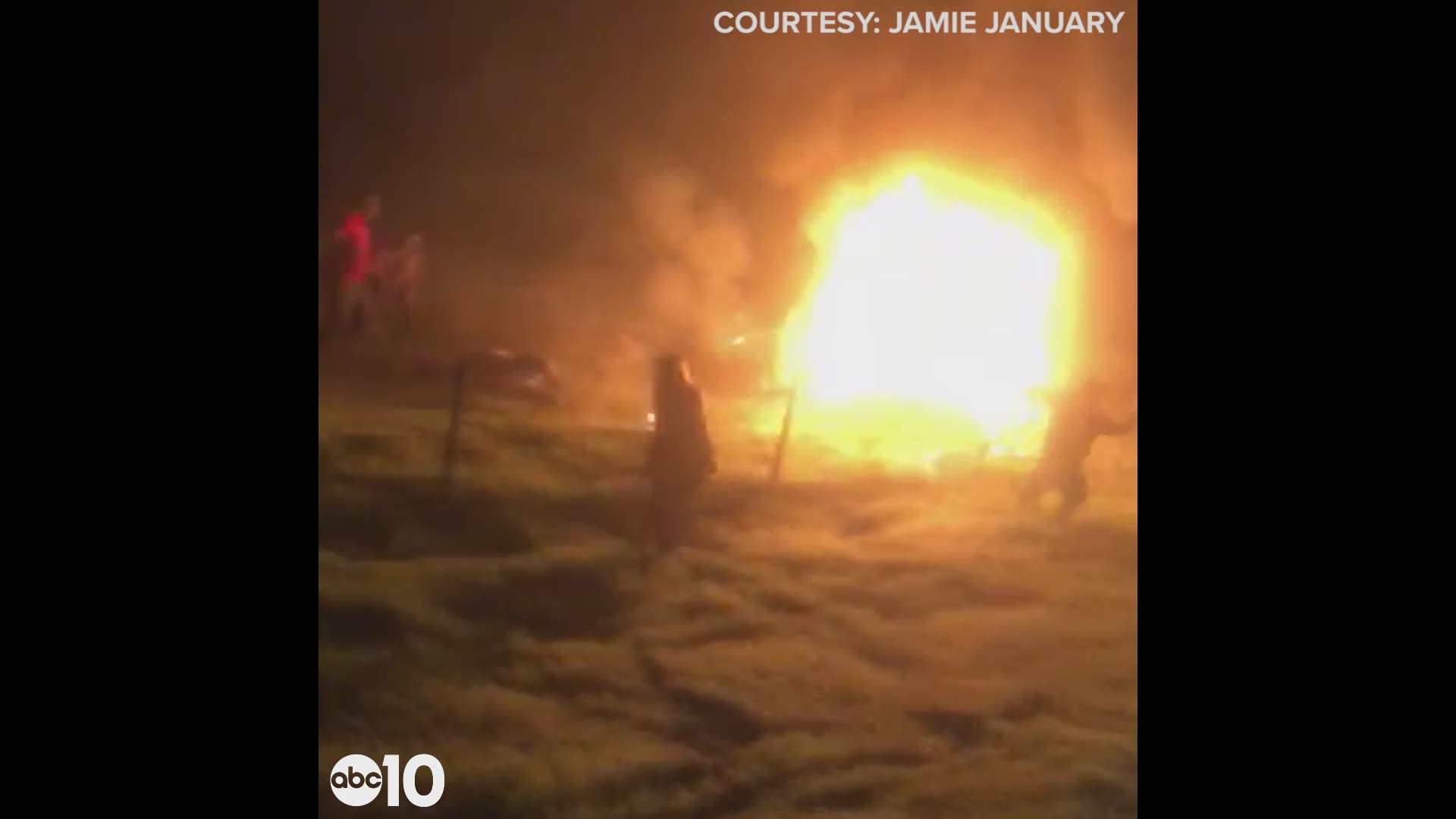