The Kincade Fire in wine country exploded to 66,200 acres Sunday into Monday.

The Kincade Fire, which has been burning since Wednesday, Oct. 23, has grown to 66,231 acres, destroyed 94 buildings and threatens 80,000 buildings, including parts of Santa Rosa.

Containment sits at 5% as of Monday morning.

A magnitude 3.3 earthquake struck The Geyser in California Monday morning, just miles from where the Kincade Fire is burning.

There have been no known reports of damage from the quake.

New evacuation orders have been issued for Sonoma County residents living in the area of Shiloh Road to Old Redwood Highway, just to the north of the Larkfield-Wikiup community.

Deputies with the Sonoma County Sheriff’s Office are going through neighborhoods using “hi-lo” sirens to alert residents to leave.

According to the County of Sonoma, the affected area was already under a mandatory evacuation order. Deputies were just going around as an added warning to those who may not have heeded the original order.

The fire was first reported near Shiloh Ridge Road and Faught Road. It is unclear if this is a new fire or if it was sparked by an ember from the Kincade Fire.

California authorities say two firefighters were injured Sunday battling a wildfire that has been raging since Wednesday.

Cal Fire spokesman Jonathan Cox said Sunday one firefighter sustained serious burn injuries and was airlifted to UC Davis Medical Center. The other firefighter who was burned had minor injuries.

Nearly 200,000 people in Northern California are under evacuation orders as crews grapple with the Kincade Fire in Sonoma County.

Officials say the wildfire has burned 54,298 acres, destroyed 94 structures and was threatening 80,000 buildings. Containment on the fire has gone down from 10% to 5%, officials said.

All evacuation orders and warnings remain in place, officials said.

Containment has gone down from 10% to 5% in the fight to extinguish the Kincade Fire.

Officials with Cal Fire shared the dismal news in their latest update on the fire ravaging Sonoma County. Officials said the fire has grown to more than 54,000 acres burned.

As it stands, the fire has destroyed 94 structures and damaged another 17 with an astounding 80,000 structures still under threat as tens of thousands of residents have been evacuated out of the fire's path.

All evacuation orders and warnings remain in place, officials said.

Cal Fire officials are giving an update on the Kincade Fire burning in Sonoma County.

The Kincade Fire burning in Sonoma County has grown to burn over 78 square miles as strong winds drive blazes and spur power shutoffs to prevent damage to power lines.

Gov. Gavin Newsom said Sunday that the fire has spread and containment had slipped from 10%. Nearly 200,000 people have been ordered to evacuate.

Meanwhile, PG&E said power is out to 965,000 customers and another 100,000 have lost power because of strong winds, bringing the number of people without electricity to nearly 2.7 million people.

Newsom had declared a statewide emergency and said "every resource available" was being deployed to fight the fire.

A satellite image shows smoke from the Kincade Fire as seen from space:

More than 180,000 people are under mandatory evacuation orders in Sonoma County. The Kincade Fire has destroyed at least 77 buildings, including 31 homes. Up to 31,175 more structures are threatened.

Evacuations expanded to the City of Calistoga and parts of Napa County on Sunday. Click here for evacuation details.

The fire has grown to 30,000 acres and is 10 percent contained, CalFire reports.

The cause of the fire remains under investigation and there are no confirmed reports of injuries as of Sunday afternoon related to the Kincade Fire.

Fire officials will provide another update tonight at 6:30 p.m. from the Kincade Incident Base Camp in Santa Rosa.

Fire crews are currently working on structure protection near the Foothill Regional Park. A residential area near Windsor is threatened by encroaching flames:

The California Highway Patrol has closed US-101 in the Windsor/Healdsburg due to poor visibility and fire to the east of Arata Ln.

Gov. Gavin Newsom just declared a statewide emergency due to "the effects of unprecedented high-wind events which have resulted in fires and evacuations across the state."

The Kincade Fire, which started October 23, is burning northeast of Geyserville off John Kincade Road and Burned Mountain Road.

The north side of the fire is burning in remote, steep terrain. The California Department of Forestry & Fire Prevention reports the southern portions of the fire have started to impact the Southern Alexander Valley.

Air quality has reached hazardous levels in some areas due to wildfire smoke. See how to make your own air filter for less than $20.

The Sonoma County Sheriff's Office said anyone who remains near Healdsburg and Windsor right now faces "significant danger." There are dozens of peace officers on duty to monitor homes and property.

Fire destroyed the historic site of the Soda Rock Winery in Healdsburg, which dates back 1869.

The National Weather Service (NWS) reports a Red Flag Warning will continue for another 24 hours with consistently gusty winds.

NWS Bay Area released a high-res satellite image of smoke from the Kincade Fire as seen from space:

Millions remain without power across the region after high winds forced PG&E to force blackouts. 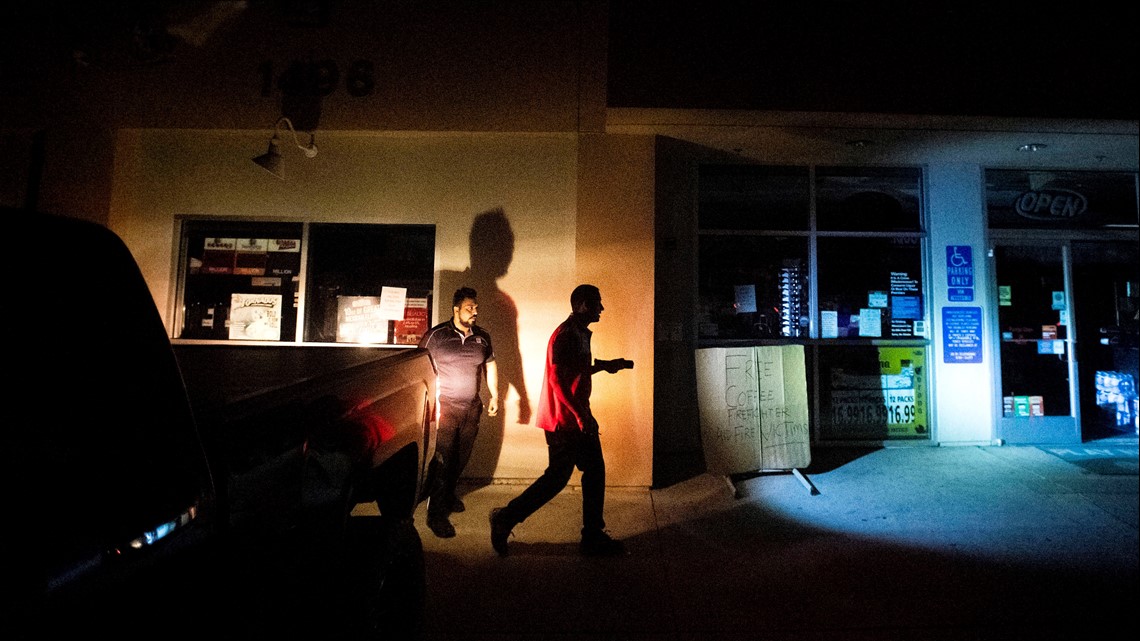 Highway 101 reopened between Santa Rosa and Cloverdale on Sunday morning. Lena Howland reports the southbound lanes of US-101 are jammed as thousands evacuate the region:

The Sonoma County Sheriff's Office tweeted Sunday, "This is the largest evacuation that any of us at the Sheriff’s Office can remember. Take care of each other."

Firefighters are working in steep terrain with winds gusting up to 80 mph. Strong offshore winds and low humidity have created critical fire weather conditions, according to the California Department of Forestry & Fire Protection.

There are 2,830 people assigned to the Kincade Fire as of Sunday morning. Officials have estimated November 7 as the date of full containment.

The historic site of the Soda Rock Winery was destroyed by fire, Carlos Herrera reports:

Winds are gusting up to 93 mph at Healdsburg Hills North, according to NWS Bay Area.

The Sonoma County Sheriff's office is advising that Highway 101 is closed in Cloverdale: "At this time, Hwy 101 northbound at Hopper Ave is closed in northern Santa Rosa and SB 101 at Cloverdale Blvd South in Cloverdale. The highway will be closed indefinitely."

Cal Fire announced at all areas within Santa Rosa north of Highway 12 and west of Highway 101 are under evacuation orders.

The Kincade Fire forced evacuation orders and warnings for nearly all of Sonoma County stretching to the coast, with forecasts of strong winds prompting officials to begin cutting electricity for millions of people in an effort to prevent more fires.

Saturday night's evacuation order encompassed a huge swath of wine country stretching from the inland community of Healdsburg west through the Russian River Valley and to Bodega Bay on the coast, Sonoma County Sheriff Mark Essick said. An even broader area was put under a warning for residents to get ready to leave at a moment's notice.

Some weekend gusts might reach 75 mph or higher in a "historic" wind event, the National Weather Service said. Winds could lead to "erratic fire behavior" and send embers for miles, warned the California Department of Forestry and Fire Protection.

The sheriff pleaded with residents in the evacuation zone to get out immediately, citing the 24 lives lost when a wildfire swept through the region two years ago.

"I'm seeing people reporting that they're going to stay and fight this fire," Essick said. "You cannot fight this. Please evacuate."

Firefighters raced to make progress against the Kincade Fire near Geyserville in Sonoma County before ferocious "diablo winds" returned. The blaze, called the Kincade fire, had burned 77 buildings, including 31 homes, and swept through more than 40 square miles (104 square kilometers) of the wine-growing region by Saturday evening. It was roughly 10% contained.

A firefighter shielded two people from flames with his fire shelter and all three were hospitalized with non-life-threatening injuries, Cal Fire said.

Several thousand people in neighboring Lake County were warned to be ready to evacuate if an order is given. A 2015 wildfire in the area killed four people and burned nearly 2,000 buildings.

What sparked the current fires is unknown, but PG&E said a 230,000-volt transmission line near Geyserville malfunctioned minutes before that blaze erupted Wednesday night.

Weekend forecasts detail what could be the strongest winds of the year coupled with bone-dry humidity. Many facing power shut-offs were far from fires. PG&E cast blackouts as public safety efforts to prevent the kind of blazes that killed scores of people over the past couple of years, destroyed thousands of homes, and ran up tens of billions of dollars in claims that drove the company into bankruptcy.

"Any spark, from any source, can lead to catastrophic results," Vesey said. "We do not want to become one of those sources."

IN-DEPTH: The story behind PG&E's shutoffs: Fire - Power - Money. Inside California's burning crisis and how it's going to cost us all: