Jaron King, 34 of Davis was arrested in Vacaville after lighting his own car on fire. 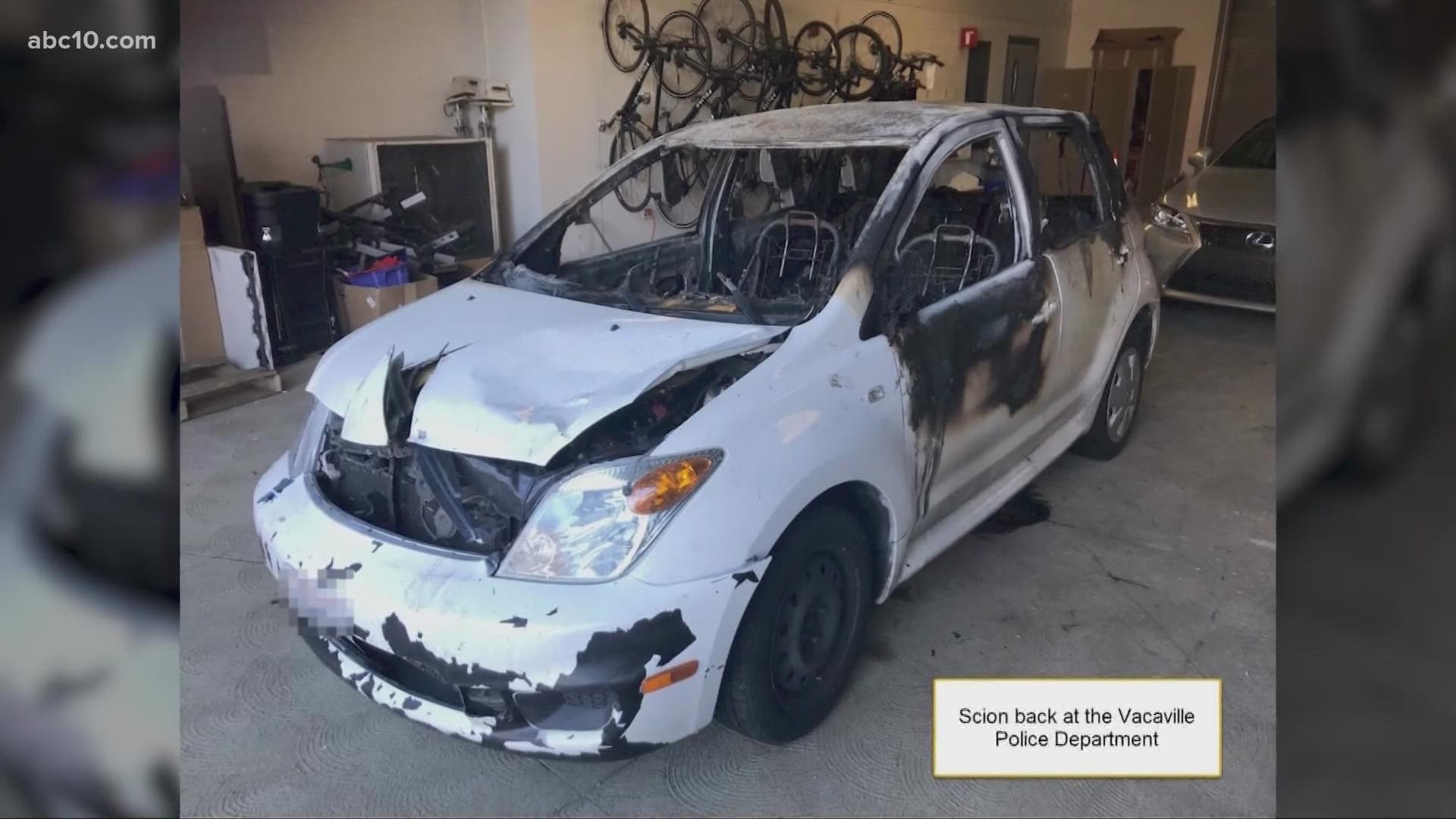 VACAVILLE, Calif. — A reckless driver in Vacaville was allegedly trying to run over pedestrians before lighting his car on fire and a local business Monday. This took place near the Starbucks on East Monte Vista Avenue and continued at the Walmart Neighborhood Market off of Nut Tree and Elmira.

According to the Vacaville Police Department, they received calls just after 6:30 p.m. about two people and a stroller who had been hit by a white hatchback Scion. After responding to Starbucks and learning no one had been seriously hurt, dispatchers responded to more calls about the same vehicle reportedly trying to run over another pedestrian in the Walmart Neighborhood parking lot in what appeared to be intentional.

Credit: Vacaville Police Department
Police in Vacaville are investigating a reckless driving incident that resulted in two people a stroller being hit.

An officer spotted the Scion at the intersection of Elmira and Leisure Town with the driver's door open. The driver was spotted at the driver's side of a nearby vehicle which later drove off.

According to Vacaville police, the driver, identified as Jaron King, 34 of Davis, got back in his Scion and proceeded to head north on Leisure Town Road. King led officers on a high-speed chase heading eastbound on I-80 through Dixon and into West Sacramento.

After passing through Harbor Boulevard., the Scion caught fire and King jumped out before being taken into custody. Upon further investigation, it was discovered that King lit his own vehicle on fire prior to jumping out.

King was transported to a nearby hospital where he is being treated for his injuries and is currently under arrest on multiple counts of assault with a deadly weapon, felony evading and attempted murder.

According to police, a local business provided surveillance video of the Scion being operated in a manner that suggested King was actively and intentionally trying to hit pedestrians in the Walmart Neighborhood Market parking lot.

"We’re still trying to find two people we saw on footage narrowly avoid being struck, as well as any occupants of the car Mr. King was near at the intersection of Elmira Road. and Leisure Town Road," the Vacaville Police Department said. If you are one of these individuals or know them, please give us a call so we can better understand what happened.

The Vacaville Police Department is urging anyone with information regarding this case to contact Detective Smith at 707.469.4826.