The Pannell Clinic in South Sacramento is offering paperwork and translator support in 12 different languages to promote language equity. 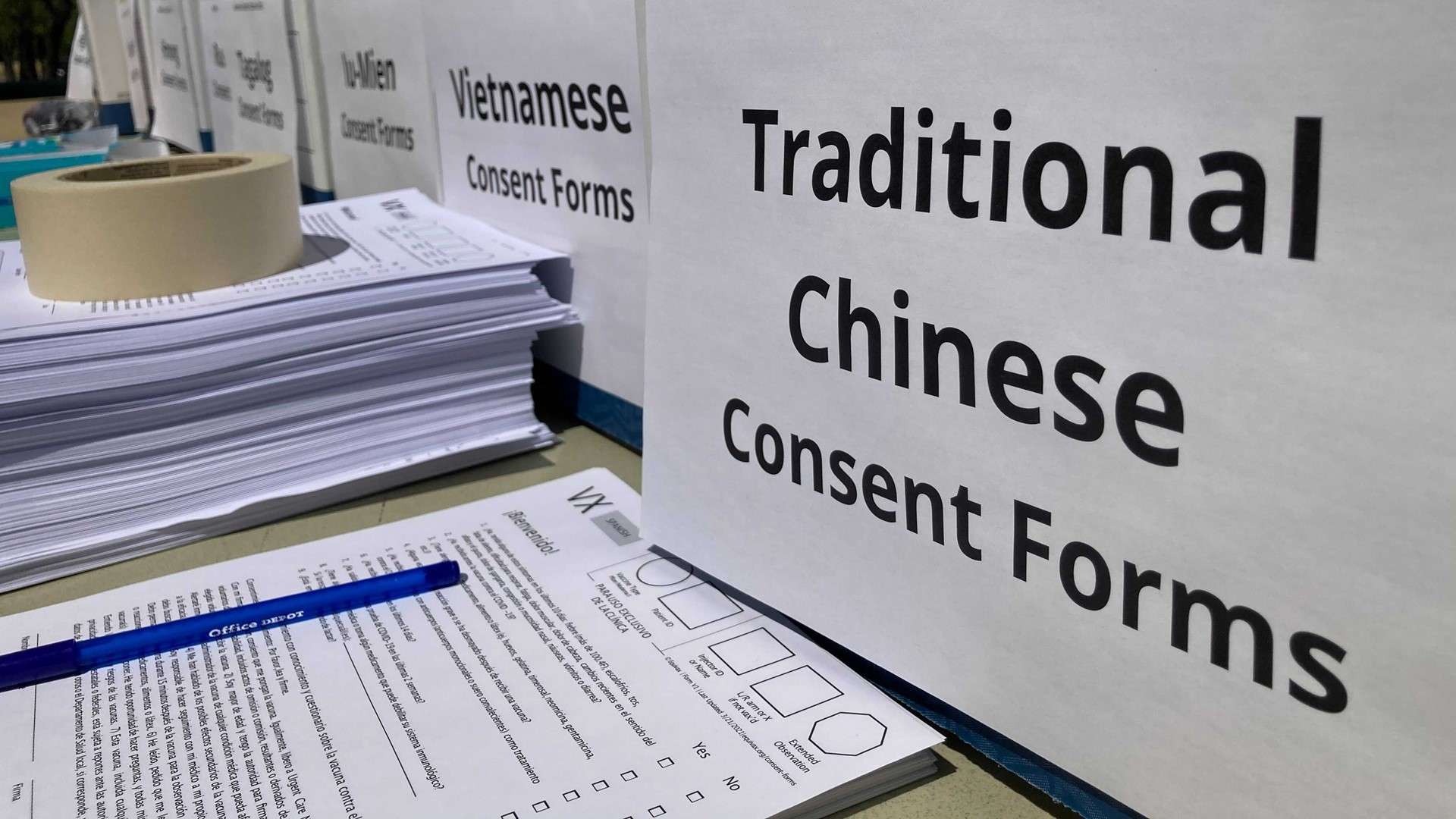 SACRAMENTO, Calif. — As more people continue to get vaccinated, families are running into language barriers as most mass clinics are primarily English-speaking.

But a weekly South Sacramento vaccination clinic is working to break down those barriers to make sure everyone who wants a vaccine can get one -- no matter what language they speak.

It’s a big day for Nate To and his 91-year-old grandfather Hien.

"Me and my grandpa got our second shot!" To said.

Hien only speaks Cantonese and Vietnamese and is also struggling with dementia so he relies on his family for help.

“When you go to South Sac or like anything like that, generally people speak Chinese or Vietnamese something like that. And if you go to a different part of Sacramento, they won’t be very populated with that community, so it would be harder for him able to communicate," he said.

LANGUAGE BARRIERS: As most mass vaccination clinics are primarily English speaking in NorCal, a South Sacramento clinic run by @CMMaiVang and partners is breaking the language barrier by offering translator support in 12 different languages!! Full story tonight at 6:30 on @ABC10! pic.twitter.com/XN3TX8MYgT

That’s why Sacramento City Councilwoman Mai Vang, who is a first-generation Hmong-American herself, says at her clinic they’ve got options.

"So we have Hmong, we have Chinese, we have Tagalog, we have Vietnamese,” Vang said.

And that’s just to name a few, with paperwork, signs, and volunteer translators in 12 different languages available. Vang says, of the people that have gone through her clinic in the past six weeks, almost half said English is not their primary language or they don’t speak English at all.

"So all of the folks who are volunteering today are from community-based organizations, residents in the neighborhood, stepping up to do the interpretation, right, but that shouldn’t happen. It should be standard, government entities, folks should make sure that this is standardized so we have that support already," Vang said.

And it’s the translators, like 18-year-old Sacramento State student Yee Thao, who aren’t just responsible for checking people in, but for easing some concerns in their own language.

"Knowing that someone like you is also taking the vaccine... having that real reassurance also helps them overcome their hesitancy," Thao said.

"It’s really helped them because like it’s more than a year of people just stay at home and this will help us get better," Tran Suynh, a volunteer Vietnamese translator said.

And although the languages might be different, the gratitude is universal.

"You can just tell by the way, when they walk out, how relieved they are," Vang said.

To sign up for an appointment in multiple languages at next Friday’s clinic at the Pannell Center, all you have to do is call one of their community-based organizations listed below:

This Friday, April 16th at Pannell Community Center in @TheCityofSac we’ll be administering 2,000 doses of Pfizer. Call one of our CBOs below to schedule an appt or text “vaccine” to 916-476-2225 to get a call back! Walk-ins are welcome! #EquityInAction#CommUNITYImmUNITY pic.twitter.com/VO8KGQOAm9

WATCH ALSO: Cal Expo COVID-19 vaccine clinic to be taken over by Curative