Thousands were estimated to have marched in downtown Sacramento for "A Peaceful Protest for Our Rights." 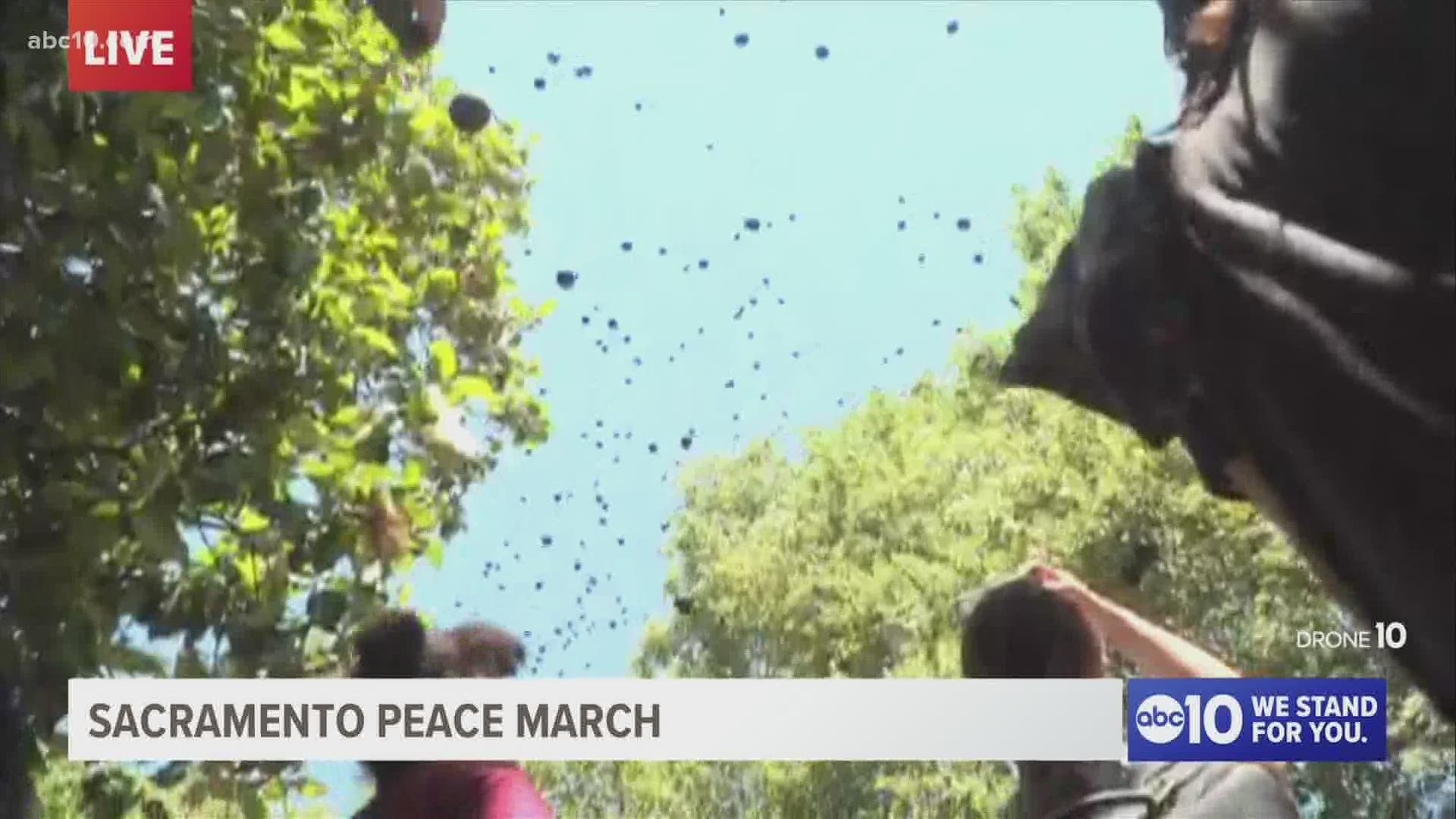 SACRAMENTO, Calif — Editor's note: This article will be continually updated throughout the day with the latest news about protests happening in Sacramento and surrounding areas.

7:30 p.m. Update: No arrests were made at a Saturday morning protest from the Golden 1 Center to Cesar Chavez Plaza, according to the Sacramento Police Department.

As of 4:45 p.m., officers hadn't arrested anyone who participated in the protest. The department said it "will continue to monitor any protests that occur to ensure that they remain peaceful and that they are able to express their first amendment right."

The Davis Police Department announced Saturday that its banning the use of neck holds.

"Due to the potential for inflicting unintended serious bodily injury, officers shall not use chokeholds, strangeholds, lateral vascular neck restraints, carotid restraints, chest compressions, or any other tactics that restrict oxygen or blood flow to the brain," according to a press release from the Davis Police Department.

5:15 p.m. Update: The Sacramento Police Department is suspending the use of carotid control holds, according to a tweet from the department Saturday.

On Friday, Gov. Gavin Newsom ordered the California Peace Officers Standards and Training (POST) to stop using the hold, which can block blood flow to the brain.

The change goes into effect immediately.

5 p.m. Update: As thousands of people gathered for a march to Cesar Chavez Plaza to stand against racial inequality, ABC10 spoke to several protesters who said they believe people are ready to have an honest conversation about the Black experience.

"To be black is just you live under certain circumstances that nobody else has to live," Isaiah Brown said.

"I think everyone is understanding that it has been a struggle," Rodney Ferrell said.

4 p.m. Update: Although there was heavy security, there was no violence or hostility at Saturday's rally. A spokesperson with the Sacramento Police Department said the protest had a good crowd. Officers were stationed around Cesar Chavez Plaza, and two blocks from the rally, concrete road barriers were established to prevent traffic from getting too close to marchers and participants. Also patrolling on Saturday was the National Guard, although they didn’t appear to be seeing a whole lot of action.

3 p.m. Update: Deon Barron attended Saturday's rally and march in honor of his late father, Kennedy Barron, who died while in custody at the Sacramento County Jail. "They don't know what it's like to not be able to connect with your father or to be there for him to see his grandson and kiss the grandson. I'm here to show people we're no longer gonna be silent and we need change. There must be change."

1:50 p.m. Update: Sacramento City Council has voted to lift the citywide curfew, effective immediately. The vote follows an emergency meeting that took place after Saturday's protest, that took marchers from the Golden 1 Center, to the Capitol building before ending at Cesar Chavez Plaza.

Thousands of demonstrators filled the streets in Sacramento and other locations across California on Saturday. They are continuing more than a week of protest marches expressing outrage over the death of George Floyd. The demonstrations in recent days have been boisterous but non-violent, in contrast to last weekend when some protesters smashed windows and ransacked stores.

1:30 p.m. Update: Sac RT is reporting that light rail service has resumed in the downtown Sacramento area. However, delays are expected to continue while trains and buses get back on schedule.

Noon Update: There is a strong sense of unit and community throughout Cesar Chavez Plaza and the surrounding area. There are people of every race and age, so many people who who have gotten creative with the signs they’ve made, writing very thoughtful messages. Speakers so far have included Darrell Steinberg, Sacramento Kings owner Vivek Ranadivé, Stevante Clark and others.

In additional traffic news, Caltrans District 3 tweeted the on and off ramps for Interstate 5 northbound and southbound at J Street have temporarily closed.

11 a.m. Update: Sac RT is temporarily suspending light rail service in the downtown Sacramento area due to today's rally. According to Twitter, large crowds have gathered on the street, disrupting travel. Bus service is still operating, but Sac RT is advising commuters to expect delays.

10:30 a.m. Update: The Sacramento Police Department is advising commuters to stay clear of the downtown area due to the march that's currently taking place.

10 a.m. Update: Sacramento Mayor Darrell Steinberg tweeted that the Sacramento City Council will gather for an emergency meeting Saturday afternoon where the mayor will "recommend the curfew be lifted immediately and the National Guard no longer be deployed."

"A Peaceful Protest for Our Rights," organized by local filmmaker Deon Taylor and Sacramento Kings assistant coach Bobby Jackson, kicks off at 9:30 a.m. Saturday, June 6 with a march from the Golden 1 Center to Cesar Chavez Plaza.

The march and rally will feature speakers from the National Association for the Advancement of Colored People [NAACP], community members, and local and state officials. The rally is expected to end around 2 p.m. with a balloon drop.

On Friday crowds in Los Angeles, San Francisco, Sacramento and elsewhere marched, cycled and staged “die-ins" to protest the death of George Floyd in Minneapolis and other African Americans who have died during police confrontations