Protesters returned to Cesar Chavez Plaza just before 11 p.m. and started to head home for the night. The second night of protests in Sacramento has ended. 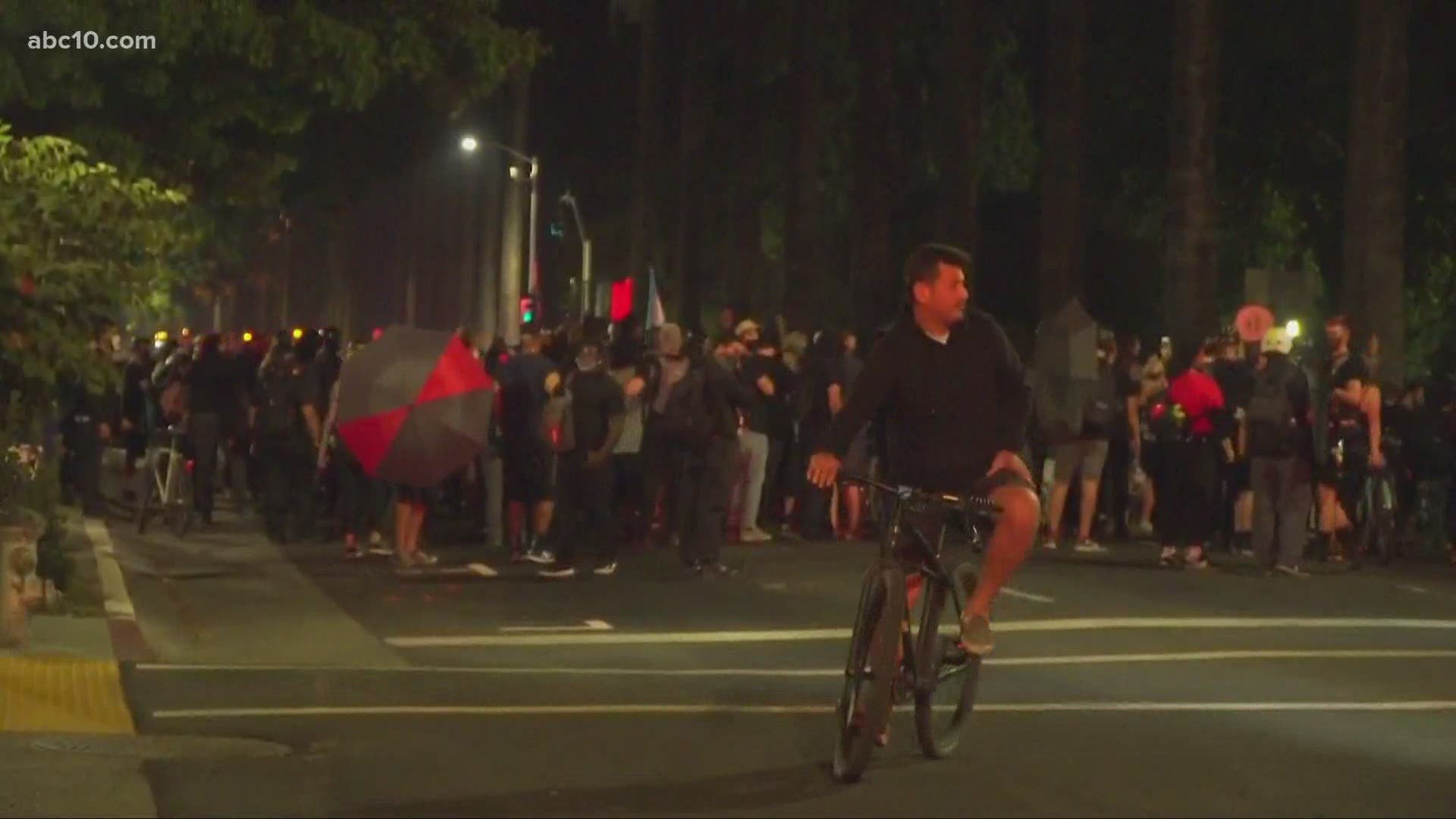 The crowd marched to City Hall again and then headed back south toward Cesar Chavez Plaza.

Most of the crowd dispersed once they arrived back to the park. The second night of demonstrations calling for police reform and justice for Jacob Blake Jr. has ended, according to Sacramento Police.

One person was detained after police were told they had a gun. Officers said it turned out to be a BB gun.

Authorities say a "heavy police presence" will remain in the area.

10:39 p.m. Crowd is back at Cesar Chavez Plaza and appears to be leaving. @ABC10 pic.twitter.com/5RsJQnsTKD

The crowd has dispersed. One subject was detained after a community member reported he was armed with a firearm. The weapon was found to be a BB gun and is pictured below. pic.twitter.com/8tFtlR9SIY

Sacramento Police said laser pointers are being aimed at a police helicopter and that some motor officers have been struck with rocks.

A man with a sword confronted protesters near 15th Street. No one was hurt and the swordsman eventually backed down. The crowd then continued marching north on 15th.

More graffiti has been tagged on multiple buildings downtown.

10:09 p.m. A man with a sword has a dangerously tense confrontation with some in the crowd. The man sword eventually backed off and the crowd is now continuing north on 15th street @ABC10 pic.twitter.com/oS1BAf9cXT

The off-ramps of both northbound and southbound Interstate 5 at J Street have been closed because of Friday night's demonstrations, Caltrans reports.

There is no estimated time for when the ramps will be re-opened.

The protesters have made it to the Capitol. An ABC10 field crew reported a small fight breaking out in the group near L Street but it was quickly broken up.

9:30 p.m.: Crowd made it to the Capitol and are now heading toward L St. one small fight broke out among people in the crowd. Was quickly broken up. @ABC10 pic.twitter.com/1EJWVXZqDZ

Protesters made it to the Capitol Mall from 5th Street, then started marching back east toward the Capitol building.

Some in the crowd attempted to break windows with skateboards at the John E. Moss Federal Building. The attempt was apparently unsuccessful, but a wall outside the building was tagged with graffiti.

9:22 p.m. Some in the crowd attempted to break windows with skateboards at the John E. Moss Federal Building. Attempt appeared to be unsuccessful but an outside wall was tagged. Crowd continues towards Capitol chanting “Black Lives Matter”. @ABC10 pic.twitter.com/YTqBSL7ecW

The protesters are on the march heading west from Cesar Chavez Plaza.

Sacramento Police have announced another round of rolling road closures to make way for the protesters. In a tweet, Sac PD said at least 150 protesters are a part of the group.

The group then headed down 5th street heading south. So far there have been no reports of vandalism.

ADVISORY:
A group of approximately 150-200 have begun to march from Chavez Park. Many subjects have helmets, shields, armor and weapons. Rolling road closures are in effect. Heavy law enforcement presence downtown. pic.twitter.com/NnvkyHi43n

Protesters are starting to gather at Cesar Chavez Plaza in downtown Sacramento. The march has not yet begun.

8:37 p.m. Crowd gathered around Cesar Chavez Plaza, things staying quiet at this moment. Most not wishing to speak with @ABC10 or other media outlets. pic.twitter.com/pArquRwHLv

8:04 p.m. Friday: Law enforcement huddle up inside Sacramento City Hall ahead of planned Solidarity with Kenosha protest set to start around the corner at Cesar Chavez Plaza @ABC10 pic.twitter.com/5aQAHBtMb0

Sacramento is bracing for a second consecutive night of protests, with activists calling for police reform and justice for Jacob Blake, Jr.

Blake is the Wisconsin man who was shot in the back seven times by Kenosha Police officers on Aug. 23. Blake survived the shooting, but he remains in serious condition in the hospital. Doctors say he is paralyzed from the waist down.

Sacramento County Sheriff Scott Jones said Friday afternoon that he has requested the deployment of National Guard troops in the California capital after some people protesting Thursday night smashed business windows and tried to set the district attorney's office on fire.

“I’ve reached out to the office of emergency services and requested additional resources, including the National Guard. Tonight, there will be scores of additional officers available to maintain order,” Jones said.

"The presence of the National Guard may be necessary at some point, but it also has the potential and the risk of inflaming the situation, and that's not - we want just the opposite," Sacramento Mayor Darrell Steinberg said.

Jones said the damage was done Thursday night by people associated with the Antifa group, not an earlier group of protesters from Thursday evening.

We are receiving reports of subjects attempting to light a fire at the DA’s office. The fire has been extinguished. There have also been reports of vandalism including spray paint and broken windows. pic.twitter.com/dKXeIj6fcn

“We’ll be out again tonight. We’ll also be out protecting the district attorney’s office and the former sheriff’s headquarters building, as well as other locations,” said Jones. “We will have dozens of officers present that are not visible, but ready to act if necessary.”

No arrests were made in Thursday night's vandalism, which followed a non-violent rally earlier that day by another group.

The Sacramento District Attorney's Anne Schubert blames a local Antifa group, referring to it as a domestic terrorism organization, and says those identified as having committed violence will be prosecuted.

"Contrary to the peaceful protest held earlier in the evening, Sacramento Antifa, along with outside Antifa groups, wreaked havoc on the Sacramento community, threatening media reporters and others, damaging many buildings, and trying to set a fire in the lobby of the District Attorney’s office," says a statement released by Schubert's office. "They have threatened to do the same in the coming days."

Rider Alert: With another night of protests scheduled this evening (Friday, August 28, 2020) and the large number of people expected to be walking on/near the light rail tracks and key corridors, SacRT will be temporarily suspending light rail, bus & SmaRT Ride service...cont'd pic.twitter.com/fbKqzWjKov

A spokesperson for Cal OES issued the following statement on the sheriff’s request:

“We are aware Sherriff Jones comments and have been coordinating with his Office. Through California’s Law Enforcement Mutual Aid System, we are providing local and state law enforcement officers from multiple agencies throughout the Region to support Sacramento.

We are closely monitoring the conditions and can provide additional resources through the Mutual Aid System as needed. Use of the National Guard for law enforcement support is used only in the most extreme cases, or after the mutual aid system is fully committed.”