Thousands of officers have come from across the state and across the country to participate in the memorial procession for Sacramento Officer Tara O'Sullivan. 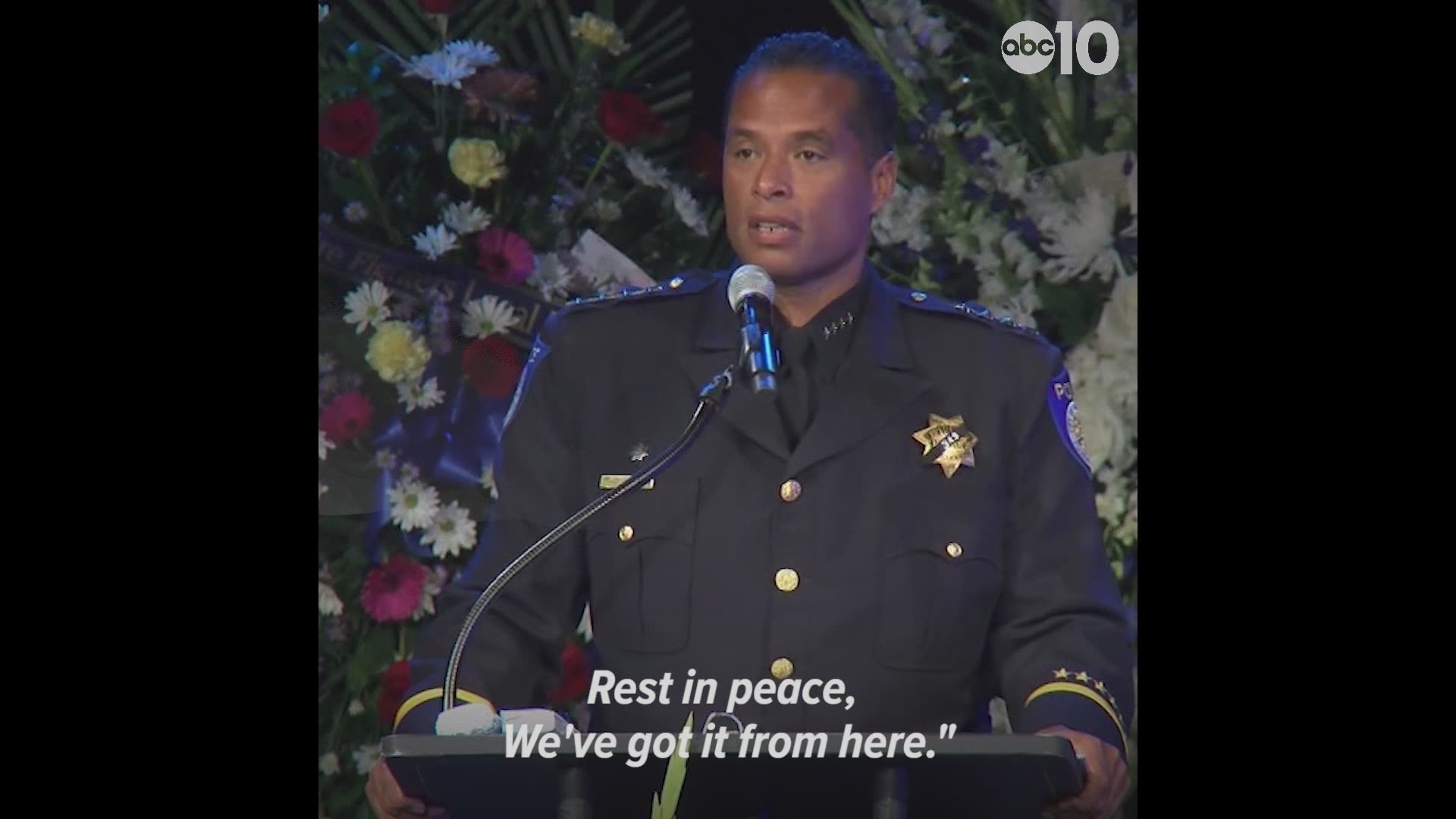 Among the supporters in the crowd was Linda Fassett from Sacramento's Land Park. She stood outside the William J. Kinney Police Facility in Del Paso Heights as the procession drove by. The death of officer O'Sullivan hit home for Fassett.

"I do have a daughter that's a little older than officer O'Sullivan and she is out there every day. I really worry for her and this event really brought that home for me," says Linda Fassett.

The death of officer O'Sullivan hit home for many, but it also brought people from different communities together. For those who lined up on Marysville Boulevard, it was a time for solidarity —  supporters waved flags, pictures and signs during the procession.

Stacy Harvey stood under the shadow of a giant American flag, held up by two fire trucks, giving thanks to officers that passed by.

"They mean a lot to us. They are here to protect and serve us. So, we have to support and help serve them, lift them up and keep them in positive note," says Stacy Harvey. 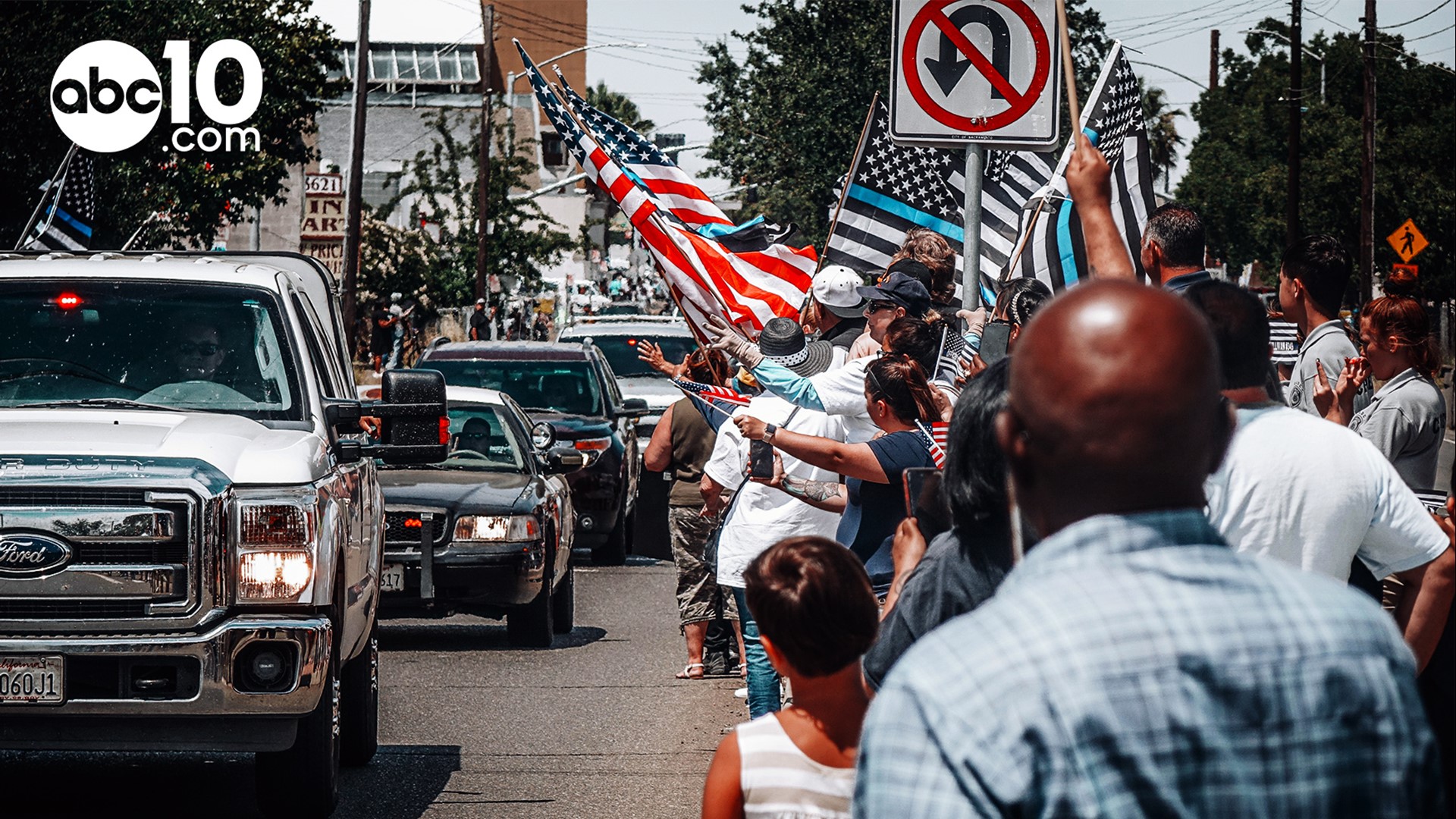 Hundreds of people are lining the street at the Marysville Boulevard Police station awaiting the memorial procession of Sacramento Officer Tara O'Sullivan. The Marysville Blvd Police Station was where the slain officer had worked.

The funeral procession will take the following route:

More than 500 police vehicles have been expected to line the streets from Roseville to Sacramento and Elk Grove.

Thousands of officers across the country have joined for the memorial processional of slain Sacramento Officer Tara O'Sullivan.

As people await the memorial procession for slain Sacramento Police Officer Tara O'Sullivan, people from the community and from public safety have lined overpasses in solidarity with Sacramento Police Department.

Credit: ABC10KXTV
Firefighter line an overpass on I-80 awaiting the memorial procession for Tara O'Sullivan.

South Placer Fire District and Rocklin Fire have also lined up to show support on an overpass.

Supporters line the streets outside of the Roseville Bayside Adventure Church.

At the memorial service for Sacramento Police Officer Tara O'Sullivan, her godfather, Gary Roush, gave a personal eulogy. Roush talked about Tara's strong character and her love for animals. 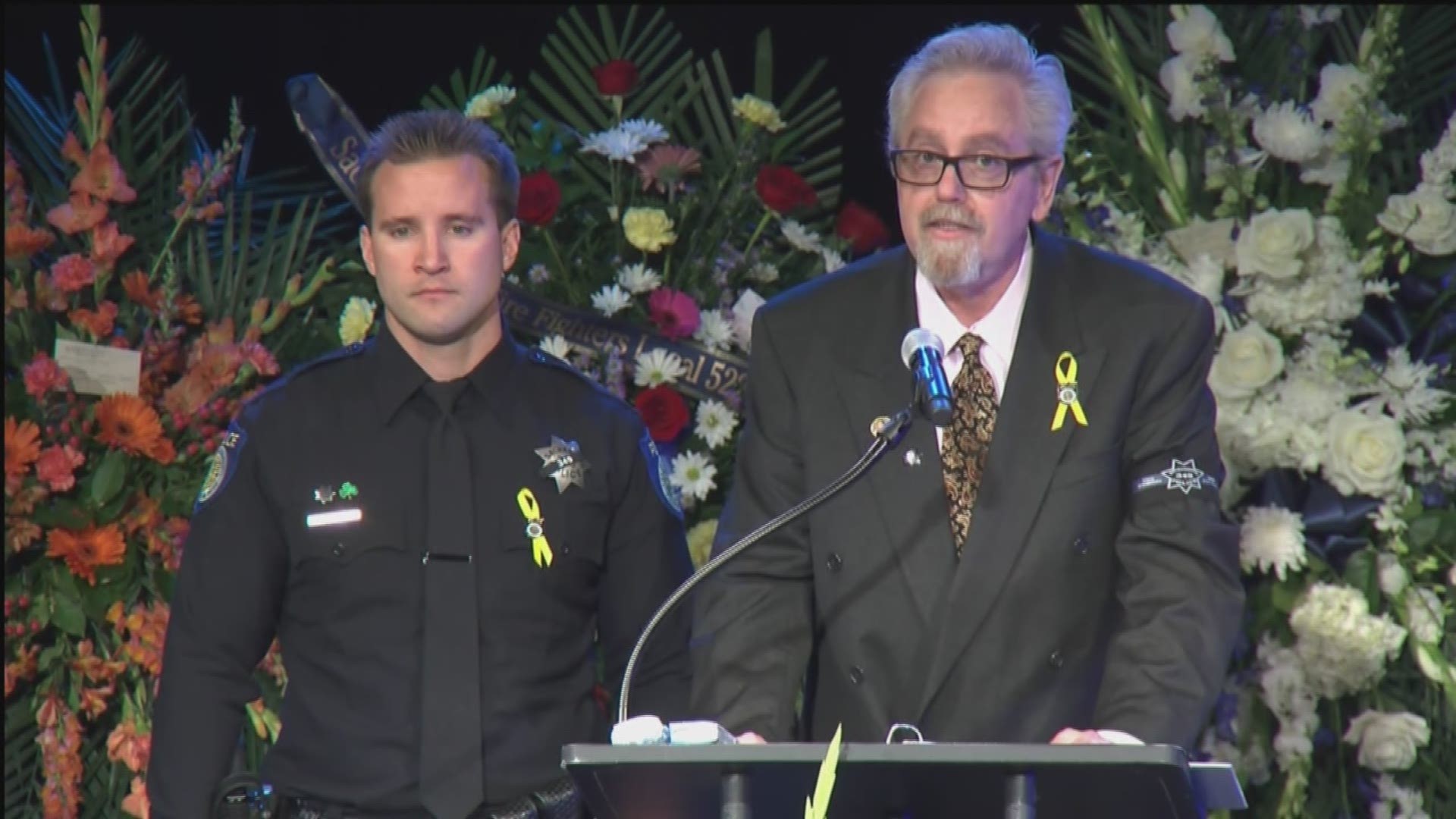 Chief Daniel Hahn is presenting the American flag draped across O'Sullivan's casket to her family. 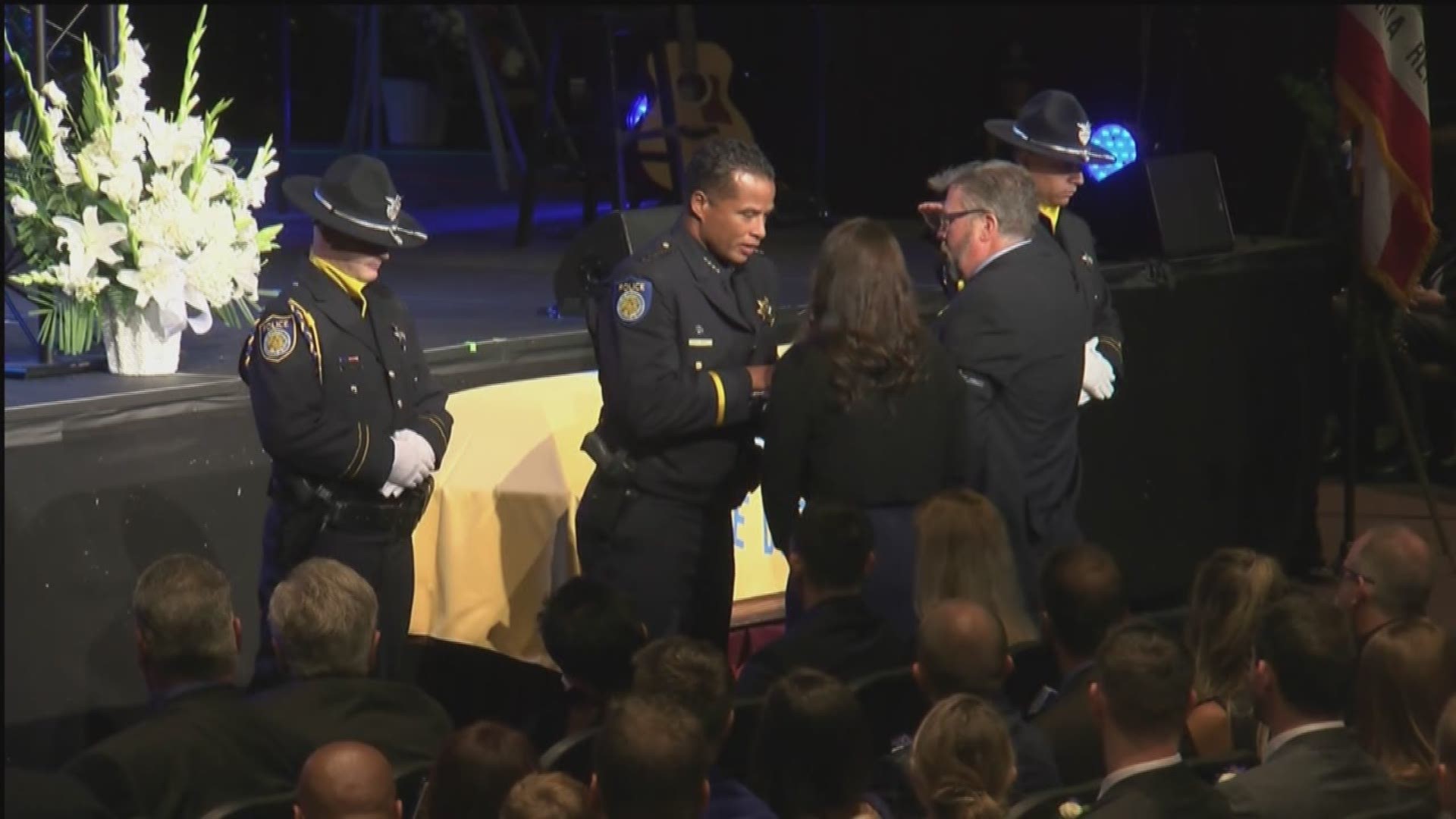 Fellow law enforcement officers from across the state and the country are in Roseville for the memorial service of Sacramento Police Officer Tara O'Sullivan.

The list of visitors spans from locals and neighboring states and agencies visiting from as far as Texas. An Arizona police department shared a tweet with O'Sullivan's badge number expressing solidarity for Sacramento Police Department.

He shared memories of her inquisitive nature. she would make frequent ride-alongs with police. On those ride-alongs, she would ask questions constantly.

He said she shared her mom's fire, commitment to health and fitness, her dad's attention to detail, and the passion and care for others from both of them. Ferrer mentioned that she was great at interacting with people of all ages and backgrounds that it was unparalleled to others.

As her mentor, Ferrer said he rarely had conversations where O'Sullivan should have brought a situation to him.

"Her decision making skills at that age were just great," said Ferrer.

Ferrer noted that O'Sullivan wanted to be involved in everything from grants and DUI checkpoints to community outreach.

"Anything law enforcement, she wanted to be involved," Ferrer said.

Tara's godfather Gary Roush said she could make everyone she knew feel like her friend.

He shared memories of her affinity for dogs and, while he said that he's trouble by the life she left unlived, he recognizes that she accomplished more than many twice her age.

O'Sullivan Academy Sergeant Brent Kaneyuki said she always had a big smile and no quit mind set during training workouts, and noted her as a bright and rising star in the Sacramento Police Department.

He mentioned that her other Field Training Officers noted her as a model trainee and was on her way to becoming a solid cop who could communicate and related to everyone in the community.

Chief Daniel Hahn described the character of his fallen officer, noting that she earned the respect of people at the academy, and even helped others with training.

She was remembered as enthusiastic and ready to work and even noticed by community leaders for personality.

O'Sullivan is remembered for toughness, Hahn remarked that she broke the record for planking, notching 17 minutes. She later broke her own record achieving a 25 minute plank that stands to this day.

"She was made for being a police officer in Sacramento and was called to serve," said Chief Hahn.

He added that Sacramento Police Department feels her absence every hour and every day.

Sacramento Police Chief Daniel Hahn said there are many who are in the building and watching on TV that didn't know Tara but love, honor, and support what she stood.

"Tara stood for good and stood for service for others," said Chief Hahn.

He said you would always known when Tara was in the room. Hahn said "evil" showed its face in Sacramento, and, when it did,  O'Sullivan and her partners responded to answer when someone called.

He had met O'Sullivan at his own swearing in ceremony at Sacramento State, and he said it was easy to see how easy much passion she saw for becoming an officer.

Chief Hahn said O'Sullivan fought with tremendous courage against that "evil" that threatened her and the city.

Sacramento Officer Tara O'Sullivan was 26-years old when she was fatally shot and killed in the line of duty. She became Sacramento Police Department first line-of-duty death in 20 years.

O'Sullivan grew up in the East Bay, where she was known for competitive spirit. She joined her first soccer team at the age of 4 and pursued sports and fitness as a lifelong passion.

Her passion for law enforcement blossomed early, starting as an explorer with the Martinez/Pleasant Hill Explorer Program before eventually coming to Sacramento, participating in the Law Enforcement Scholars Program at Sacramento State University, and joining the Sacramento Police Department.

Hundreds of officers from around the country were expected, and many have arrived from neighboring states like Nevada and Oregon to as far as Texas.

Departments from California that have been seen include:

She was only 26-years-old when she was fatally shot responding to a domestic disturbance call. Her death marked Sacramento Police Department first line-of-duty death in 20 years.

Due to an expected capacity crowd, Sacramento police are directing people to a secondary site in Rocklin to view the service.

At an overflow viewing area in Rocklin, one person presented a gift to officers in memory of fallen officer Tara O'Sullivan. It bears the badge number of O'Sullivan, Sacramento's first line-duty-death in 20 years.

Credit: ABC10KXTV
A gift from citizens to officers at Destiny Church, one of the offsite public viewing areas for the public.

Sacramento Police officer are at Bayside Adventure Church in Roseville. The memorial service will be a chance to have one last goodbye for the departments first line-of-duty death in 20 years, 26-year-old Officer Tara O'Sullivan.

Hundreds are expected to mourn the death of the young officer.

Hundreds of law enforcement officials will mourn a rookie Sacramento police officer killed in what authorities described as an ambush while she responded to a domestic violence call.

Tara O'Sullivan, 26, had been on the job about six months when she was shot. She is the first Sacramento police officer killed on duty in 20 years. O'Sullivan was helping a woman remove belongings from her home on Wednesday, June 19, when she was shot by Adel Sambrano Ramos, prosecutors say.

Following the memorial service, more than 500 police vehicles are expected to join a roughly 30-mile procession through California's capital city to a funeral home in Elk Grove.

A procession from Bayside Church Adventure Campus will return to the community of Elk Grove, proceeding along the highway and past the Sacramento police station where O'Sullivan worked. City officials are warning of major traffic delays along the route of the procession. 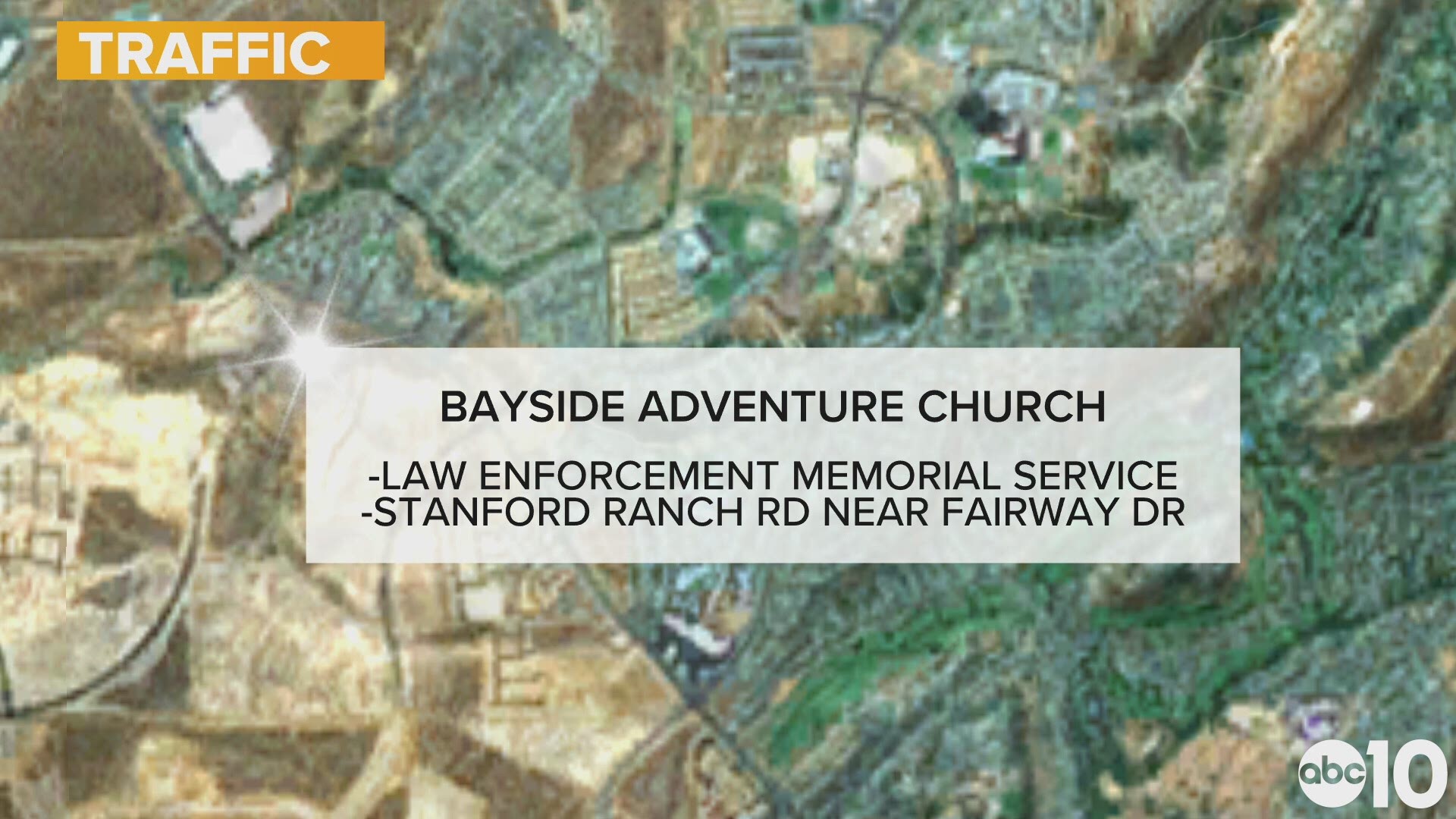 Ramos, 45, remains behind bars. He made his first appearance in court on Monday facing a murder charge that could lead to the death penalty. Ramos is also charged with attempting to murder O'Sullivan's training officer and illegally possessing two assault-style rifles. He did not enter a plea.