The California Highway Patrol and the National Guard are on the scene in anticipation of violent protests. 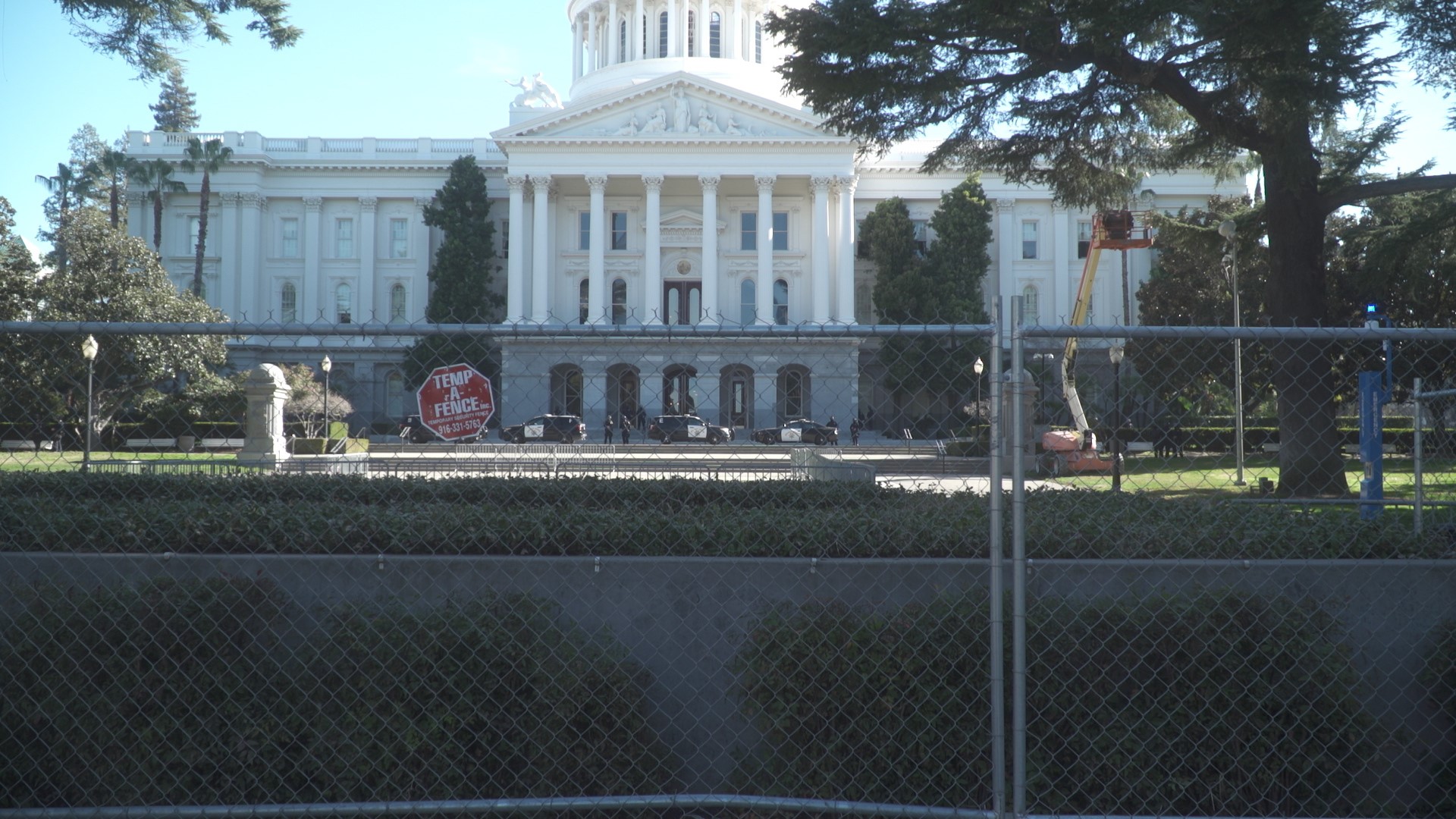 The 1,000 California National Guard troops that Governor Newsom deployed to guard the California Capitol and other government buildings were obvious Saturday.

Armed troops were stationed around nearly every corner. Other law enforcement entities, like the California Highway Patrol Capitol Protection Division, were also in great numbers behind the barricades placed up surrounding Capitol grounds.

But any threats were not heard Saturday. The grounds remained largely quiet and peaceful throughout the day, with just a handful of demonstrators showing up. One of the few who were present was Christian Alvarado, who brought a message of unity.

“After the attacks of the U.S. Capitol and the threats that have been coming about with the state capitols, I wanted to come out here to simply show my support for the legislators, our police officers, our national guardsmen and the idea of our democracy and the idea of a peaceful transition of power,” said Alvarado. “No matter what someone’s political beliefs are, race, religion or creed, we are one nation and I am here to support that.”

“In the service we had a saying, ‘This will defend.’ We defend the flag of the United States of America,” said Hollinger. “I came down here to support the National Guard.”

The California Governor’s Office of Emergency Services officials said they’ll continue to be on the premises until Wednesday, Inauguration Day.

Update 11:45 am:  Our reporters at the Capitol said there aren't any signs of demonstrators.

Sacramento Police said on Twitter that although there aren't any demonstrators, they are prepared.

There are no active demonstrations at this time, however, in preparation for any demonstrations that may occur throughout the week there will be a continued large law enforcement presence downtown and in some surrounding areas of the city. pic.twitter.com/jiorbugui1 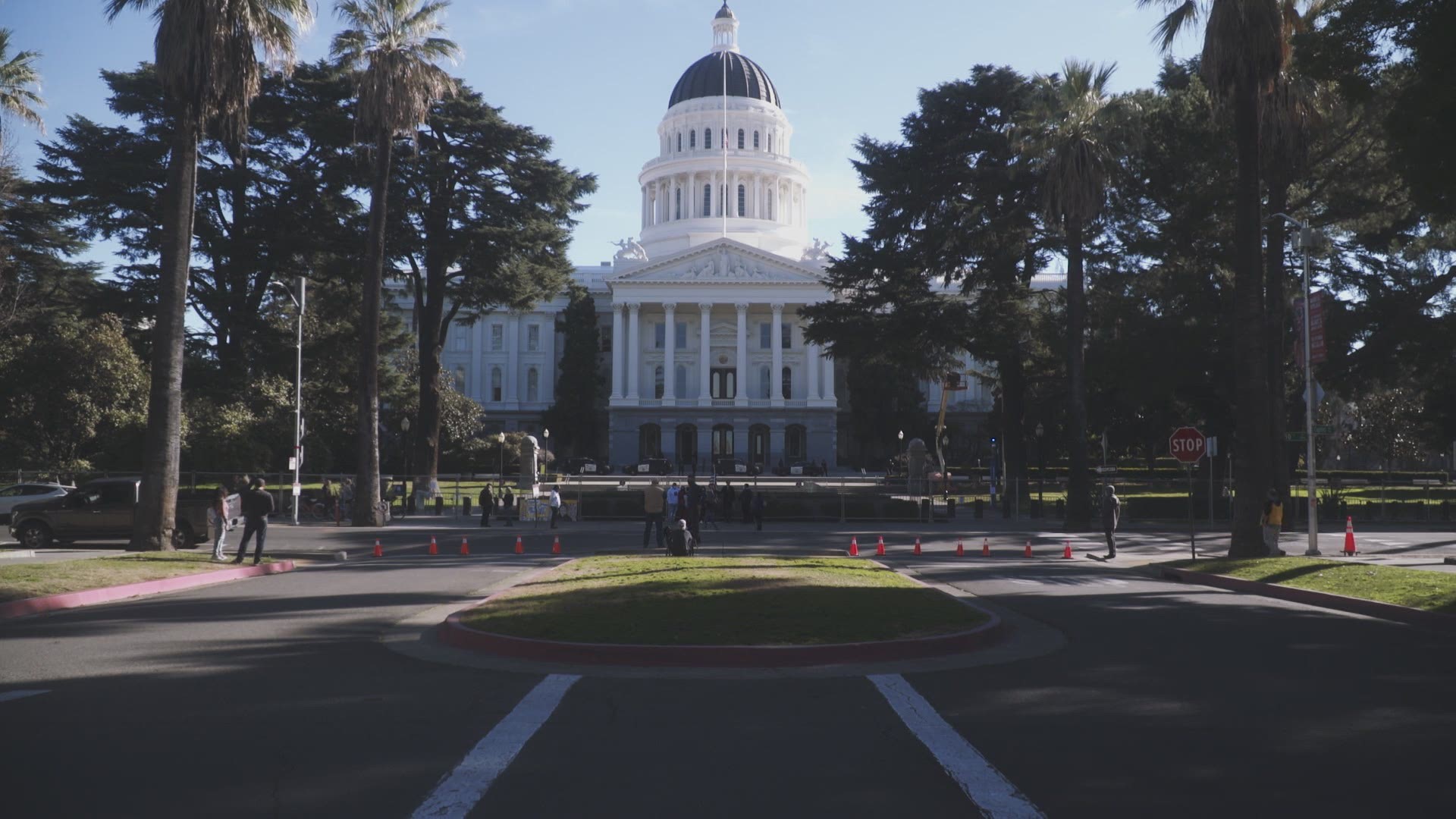 Several law enforcement agencies are at the California Capitol in Sacramento to secure the area in anticipation of any violent protests.

The California Highway Patrol (CHP) went gone on “tactical alert” on Friday ahead of the Presidential Inauguration of Joe Biden next week.

A statement from CHP read, in part, “Due to the potential for civil unrest related to the 2021 Presidential Inauguration, I have placed uniformed CHP personnel on tactical alert for an indefinite period. This allows for the maximization of resources to protect public safety as well as state buildings and infrastructure. The CHP will continue to monitor the situation and plan our resources accordingly.”

The FBI's Sacramento Field Office said Friday  they're both concerned and prepared for potential armed protests at the California Capitol over the weekend and leading up to Inauguration Day and they're taking appropriate precautions.

"[There's been] some terminology like 'storming' the capitols, so that's what we're concerned about is not people protesting, not people coming out to express their beliefs, views and freedom of speech," Sean Ragan, Special-Agent-In-Charge of the FBI Sacramento Field Office, said Friday. "It's anybody that's going to try to hijack that protest, so to speak, in order to commit violence. So we're concerned about that, we're preparing for that."

Ragan said his office set up a command post Friday, something not typically done for the many protests and unrest seen throughout 2020, so they can bring in law enforcement partners and share information in real time to ensure all agencies are aware of what's going on "from a criminal activity or violence perspective."

An FBI bulletin that went out following the uprising at the United States Capitol warned law enforcement of potential armed protests at all 50 state capitols.

The permit was requested by Chris Bish, who listed the event as "Let Freedom Ring" and was described as an event to "peacefully protest our compromised election." It listed 3,000 attendees.

CHP said they denied the permit because "because the proposed number of attendees are more than are being allowed as a result of COVID-19 and due to the potential for civil unrest this weekend."

Bish was defeated by Rep. Doris Matsui in the Nov. 3, 2020, state election for Matsui's District 6 seat.

The Yolo County Transportation District, in partnership with Sacramento Regional Transit District [SacRT], announced that they are aware of potential protests in Downtown Sacramento this weekend through the presidential inauguration.

Because of potential street closures between Saturday, Jan. 16, through Wednesday, Jan. 20, they're encouraging riders to limit travel to downtown. In a press release, Yolo County Transportation District said it is prepared to pull Yolobus service if "events warrant such, until such time that streets are re-opened and it is safe for our services to be on downtown Sacramento streets again. In this event, Yolobus service will be available to/from the West Sacramento Transit Center, using the bus stop at Tower Bridge Gateway at Sutter Health Field."